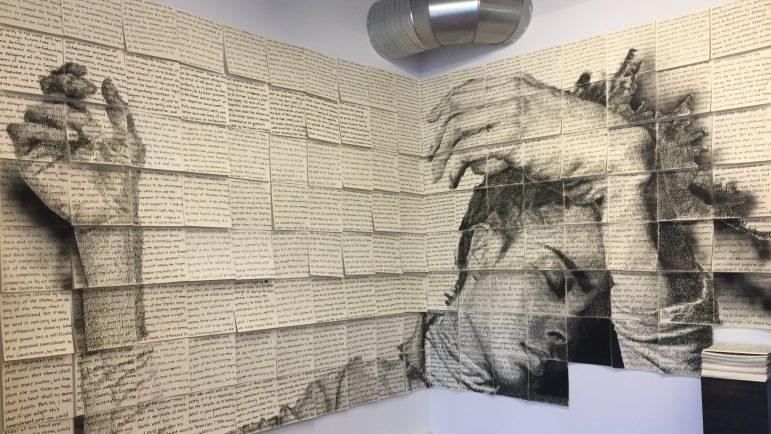 PHOTO COURTESY OF WCMA.Kenturah Davis, an artist working between Los Angeles, New Haven and Accra, Ghana, investigates the meaning of text and language in art.

The first slide of Kenturah Davis’ lecture at the Williams College Museum of Art (WCMA) last Saturday seemed utterly innocuous at first. The word “GREETINGS” received audience members with large, black capital letters, and I appreciated the friendly gesture it made as I settled into my seat among the intimidating mix of artists, art historians, curators and professors who seemed to make up most of the house that afternoon.

Once I was in my seat and went to look at the slide again, I saw the words under the salutation: “Origin: Old English grētan ‘approach, attack or salute;’ related to Dutch groeten and German grüssen ‘greet.’” The words’ existence on the slide seemed to change its function, at least slightly, from a purely social mechanism to a more analytical one. The big word “GREETINGS” now appeared as under a microscope, still able to communicate itself to the audience but only under the close watch of etymology. Davis hadn’t started speaking yet, but this text on the screen made me feel that, in a way, the lecture had already begun.

Davis was this year’s speaker for WCMA’s annual Plonsker Family Lecture Series in Contemporary Art. The series was created in 1994 by Harvey Plonsker ’61, Madeleine Plonsker and their son Ted Plonsker ’86 to examine the issues of the day in contemporary art. Past speakers include artists Sharon Hayes, Kerry James Marshall and Jessica Stockholder. WCMA’s Class of 1956 Director Pamela Franks used the words of Madeleine Plonsker herself to capture the essence of the series in her opening remarks on Saturday. Madeleine Plonsker, who was in attendance that afternoon with her husband, had once responded to a question about the future direction of the program: “As long as you keep bringing brilliant and astonishing artists,” WCMA would be doing its job.

This latest brilliant and astonishing artist works geographically between Los Angeles, New Haven and Accra, Ghana, and creatively between different aspects of design and portraiture. Her eye is on language, and through text she explores the ways it shapes human understanding of both the self and the outside world. Her work includes drawings, sculpture, textiles and performances, and has been exhibited in Africa, Australia, Asia and Europe. Her talk on Saturday included discussions of her work, her process and her inspirations.

Davis’ powerful pencil portraits featured prominently in her talk on Saturday. She described how she uses handwriting to render her subjects, repeating a phrase or passage across the canvas to create tone and legibility for each image. This technique lends these portraits a unique profundity. For example, one of the portraits depicts a woman sitting in profile. Her face is covered up by her long cornrowed hair, and she wears a plain white tank top. It’s a beautiful image, but then the viewer learns that the woman is made up of the words, “I lived to be infinity,” and another world of beauty, sorrow and wonder emerges.

These portraits are a significant facet of Davis’ cutting-edge work now, but she wasn’t always doing them. She explained that her arrival to this mode of portraiture came through a break she took from art after determining that the more conventional portrait painting she had been doing wasn’t getting her where she wanted to go. In the reading and notebook-writing she did during this break, she came to realize that she was fascinated by language. Its artistic potential was there in handwriting — she mentioned that, after all, letters are just drawings with very particular meanings attached to them — and its capacity for the exploration of the human condition was profound. “Who we are [is] inseparable from the ideas we’ve absorbed through language,” Davis said on Saturday.

And thus began Davis’ dynamic and wide-reaching exploration of language through art. She has looked at language’s power to organize and make sense of the world for us, but she has also examined its inherent limitations and the ways our own relationships with language and with each other complicate these interpretations. She has asked what’s in a name and considered our constantly changing lexicon through words like “sonder,” which has been defined by the website Dictionary of Obscure Sorrows as “the realization that each random passerby is living a life as vivid and complex as your own.” She has looked into institutional violence and prejudice in language, in how language dictates where we can go and what we can and can’t do.

One text drawing she made toward this last end uses the words of the congressional debate for the 13th Amendment. She transcribed the debate by hand over about 200 sheets of paper, and with this labor and time she wrestled with the fraught legacy of the amendment that freed slaves but also laid the groundwork for the current criminal justice system in all of its rapacious, racist glory. Her aim with the figure rendered through the text was “to portray someone somewhere between floating and falling,” in order to capture the suspended nature of the debate’s historical moment and its weighty implications for the future.

Davis also uses objects to push our linguistic mechanism, as with a piece she made that fans out from a wall in a black metal quarter-circle — is it big or small? Wide or narrow? She also works with garments to probe, for example, matters of selfhood, and she uses weaving in its linguistic capacity. Woven pieces preceded writing as a conveyer of meaning, and Davis goes back to that anthropological era with her woven work.

One of Davis’ fascinations is with Egyptian hieroglyphic carvings and the fact that each carving is “available by virtue of its shadows.” She loves that in a lunar eclipse, we can learn about the earth through its silhouette, its darkness. We tend to think of knowledge, truth, comfort and safety in terms of light and whiteness, but Davis wants to push us. There is a world of knowledge and security in the darkness. We need it desperately, in fact, just the way carvings need relief to convey their message – just the way words need their origins beneath them to reveal themselves as nothing but a series of pictures with meaning attached.