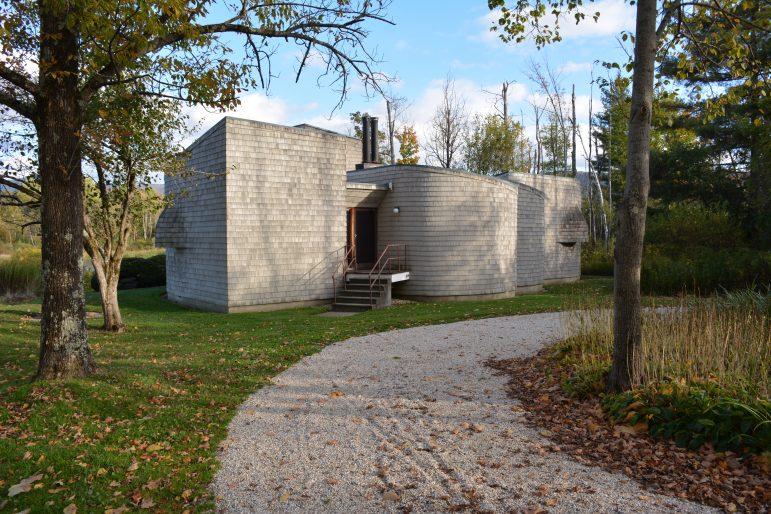 HANNAH TAGER /THE WILLIAMS RECORD The Guest House at Field Farm, an inn in Williamstown, combines Bauhaus design and furniture with modernist, and even brutalist, architecture.

The unassuming entrance of the Guest House at Field Farm off  of Route 7 provides little hint as to the spectacular contents of the building. Built by architect Edwin Goodell Jr. in 1948, the front exterior is in a democratic Bauhaus style – a German artistic movement with ties to social democracy – with an unpronounced front door at the bottom of the two-story tawny building with bird’s egg blue detailing. By stepping inside the screened door, which the building’s innkeeper Ole Reilev often opened, the masterful collection and vision of the College’s former librarian Lawrence H. Bloedel ’37 come to life as the the building’s perfectly preserved mid-century modernist furnishings transport the visitor into the past.

Lawrence, or Larry, Bloedel was one of the three children of Julius Bloedel, a Seattle-based businessman who made his fortune from logging. After Larry married his wife Eleanore, whom he met through a friend from the College, Bloedel received a degree in Library Sciences from Columbia University before becoming a librarian at the College. In addition to his deep love of books, Bloedel harbored an admiration for contemporary art that was influenced by his friendship with Lee Hirsche, an artist and the founder of the studio art department at the College. The Bloedel’s original house was on Bulkley St., and in the 1940s Bloedel began plans to build a new house that could harbor the couple’s budding art collection, which had begun with the acquisition of Edward Hopper’s Morning in the City, 1944.

Bloedel built his house on farmland formerly owned by two British brothers by the name of Field. After Bloedel bought the 300 acres, he commissioned the architect Frank Lloyd Wright to design his home. However, after “Mr. Wright absolutely refused to do what Mr. Blodel wanted,” as Reilev explained, Bloedel fired Wright and began the project anew under the direction of the architect Edwin Goodell Jr., a notable member of the mid-century modernist architects’ group that called itself the Invisible Modernists. The home was finished in 1948.

While modest from the front, the building from the back resembles a cruise ship, with a vertically compact structure and boxy balconies. The rectilinear composition of both the building and the groomed fields below mimic the cascading mountains that frame the structure. The reverse façade is dominated by expansive windows, and on a sunny day Mount Greylock is reflected in the glass. The view of the mountain from the interior of the building is far more impressive, and reservation land allows for unobstructed views of the mountain range. While a few larger trees speckle the vista, Bloedel kept the foliage groomed during his time. Inside, Bloedel furnished the rooms with the most modern designs from Isamu Noguchi, Hans Wegner, Finn Juhl, Herman Miller Eames, Vladimir Kagan and others. An early acquirer of these pieces, Bloedel often harbored friendships with these designers as well. Bloedel himself was also a skilled furniture crafstman, and the durable designs made from his family’s wood can account for the longevity of many of the building’s furnishings.

On the building’s walls, which range in color from plum to mustard, hung artworks by the biggest contemporary artists of the time. Exhibitions of artworks from the Lawrence H. Bloedel Collection have occurred at the Whitney Museum of American Art in 1982 and at the Williams College Museum of Art in 1983. Masterpieces of the collection include Marsden Hartley’s Mushrooms (1940), Edward Hopper’s Ranch House, Santa Fe (1925), Alice Trumbull Mason’s Surface Winds (Suspension Points) (1959) and Fairfield Porter’s Screen Porch (1964). A friendship between Bloedel and the artist Wolf Kahn also resulted in the acquisitions of many works by Kahn still on view at the Guest House. The grandeur of the house and its collection did not deter the Bloedels from opening up their home to the public, as the Bloedels’ granddaughter Adria Weatherbee remembers. The Bloedels were always generous with their collection and often invited art history classes from the College to come and admire the artworks. During the Fourth of July, Mr. Bloedel would host a party and put on a firework show above the property’s pond while Handel’s “Music for the Royal Fireworks” played in the background, Weatherbee recounts. “He was also completely into Christmas but he was a total atheist,” says Weatherbee. During the winter months the Bloedels would also frequently host parties in their second building on the property, The Folly, with skating on the pond.

The Folly stands next to the pond and is arguably the more remarkable of the two buildings; while the Bloedels gave the The Trustees of Reservations of Massachusetts full discretion in determining the future of the main house, they specifically noted that the Folly should remain intact following their deaths. Architect Ulrich Franzen ’42 was given free reign over the design by Mr. Bloedel and built the house in 1966 for around $100,000. While Franzen is known for his purely brutalist designs, the Folly resembles a modernist version of a Victorian shingled cottage with tilted eyebrow windows. The modest exterior has a hidden door and suggests a much smaller house than the building actually is. Weatherbee describes the house as “built like cabinetry” and not like a typical frame house; it has no equal lines and each piece of wood was built individually. The inside of the house, which is left just as it was during the Bloedels’ time, has two magnificent living rooms, one for winter with a fireplace and a summer one that looks out onto the pond and property’s pool. The lighting, which is meant to mimic the sunlight that illuminates a room, adds to the expansive feel of the small space. A geometric chandelier by George Rickey lights up the winter living room, and most of the furniture was made by Franzen and is built into the building itself. Off of the kitchen, which holds St. Charles cruise-ship style cabinetry and appliances, are three bedrooms. The hallway leading to the rooms gradually decreases in size, adding to the optical illusion of a larger space. Each bedroom is located in its own grain silo style round room and has eyebrow windows and skylights. While the building is perfectly preserved, it has often held guests and was at one point the interim home of former College president, Francis Oakley.

Today, the Folly and the Guest House are owned by The Trustees of Reservations of Massachusetts, as determined by the Bloedels’ will. It was converted into a bed and breakfast by the trustees in the 80s and currently hosts twelve guests. Aside from a few minor reupholsteries, the interior is all original with 90 percent of the furnishings coming from the original collection of Bloedel. Following the death of both the Bloedels, their collection of artworks was divided and bequeathed to WCMA and the Whitney Museum. The division of the artworks began with a coin toss — WCMA won — and was thereby conducted through diplomatic negotiating “with the stipulation that the two institutions had to decide between them who was going to take what and if they couldn’t decide on a painting nobody would get it,” Reilev notes. The current artworks on display at the Guest House and Folly are curated by WCMA from the Bloedel Collection and are rotated in and out depending on the museum’s needs.

While the Folly is held more now as a museum than livable house, Weatherbee hopes that one day the architectural masterpiece will be inhabited again. “In my opinion it should be delicately used,” says Weatherbee. In the meantime, rooms can be rented in the Guest House at a reasonable rate, and tours are given of the Folly every other weekend.