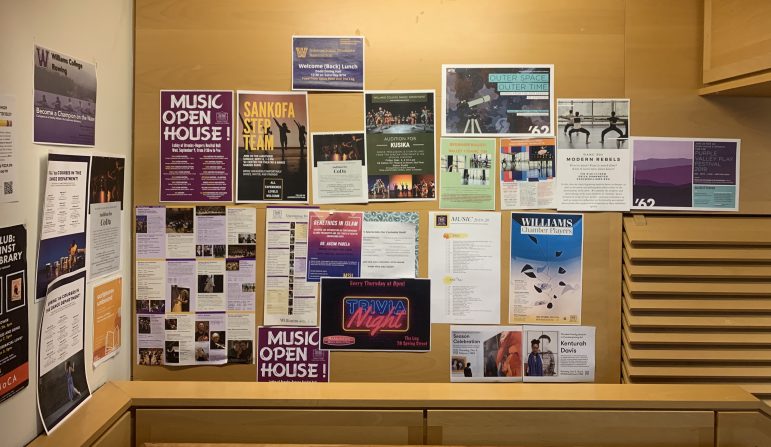 Changes to the College’s policies have impacted the guidelines for posting fliers and banners, among other aspects of student activism. (Nicky Wu/The Williams Record)

Campus leaders have raised concerns over a breakdown in communication between students and administrators after policies concerning campus expression were published online over the summer. Administrators say their hope was to make rules clearer and more accessible. Students, however, say they wish that they had been consulted by administrators before the policies were published.

Due to the prevalence of student protest in spring 2019, some student activists perceived the policies to be reactionary to last semester’s events, which included Feb. 25’s “March for the Damned” in support of faculty of color. The policies caught many in the activist community by surprise, said Suiyi Tang ’20, a student activist and co-chair of the Minority Coalition (MinCo), who first became aware of the policies through conversations with other students and faculty members.

“It would be productive if in the future it were possible for student governing bodies, including MinCo, to be able to collaborate or to be consulted by the administration in the process of determining interpretations or changes to the student Code of Conduct,” Tang said. “I think, in turn, these policies may be more respected and well understood.”

The policies, which are on the “Events” page of the student life website, were linked in an email titled, “Welcome and new year updates,” sent by Dean of the College Marlene Sandstrom to the student body on Sept. 5.

“Students have requested that we be as clear and transparent as possible in describing our policies around freedom of expression,” Sandstrom wrote. “We’d like to call your attention to three policies we’ve updated and edited for clarity over the summer… We encourage you to review each one, especially if you plan on posting fliers, hanging banners, or bringing speakers this year.”

In a joint statement to the Record, Sandstrom, Vice President for Campus Life Steve Klass and Chief Communications Officer Jim Reische elaborated on process and content.

“The speaker policy had been recently revised; the poster policy had been around, but needed a little work in light of what we learned from last year; and the protest guidelines were already in the Code of Conduct but in a way that students found hard to piece together,” they wrote, adding that the summer provided a rare opportunity for senior staff to work in a focused manner on these policies with an eye toward free expression and inclusion.

“We also wanted to stay focused on principles and not be driven by reaction to a particular action or event,” they continued. “Summer’s one of the few times you can do this.”

The aim, they said, was to give clear and consistently enforced guidelines that would be “helpful to students who use a variety of means to express themselves on campus.”

“Last year we heard some confusion and frustration: When we had to enforce the rules, people felt it seemed arbitrary or punitive,” they said. “Clarity protects students, because you know in advance where the guardrails are. And it supports staff, who then don’t have to deal with each new situation from scratch.”

Yet the guidelines could still allow for selective enforcement, students claim.

Tang raised questions over discretionary interpretation with regard to the statement, “Protests may not prevent, unduly obstruct, or interfere with the normal academic, administrative, or programmatic operations of the college.” She also expressed concern over an oversight role the College could take on, as suggested by the statement, “The college reserves the right to determine an appropriate location for rallies & picketing to ensure that college policies are followed, and to relocate or suspend any protest that violates college policies or the law.”

Tang said she believes a community discussion of the policies could be helpful for students, citing community forums that have been successful in the past.

Tactics previously employed by activist movements, such as walkouts and occupation of College buildings, Tang said, ought to be respected as acts in which students can express their wishes to a wide audience.

“I think we have to understand any sort of civil disobedience as a sign of expression or desire for communication with the administration,” Tang said. “The question is: What kinds of expression and communication are we being told are acceptable, based on these codes?”

Sandstrom, Klass and Reische said most protest tactics are permissible by the guidelines as long as “the college can continue to engage in its functions.” Protests may not, they said, prevent students from entering classrooms during scheduled class meetings or prevent staff from doing their work. If these conditions are met, building occupations and walkouts would be permissible, although they added that in the case of walkouts, “Students might face academic or employment consequences if they chose not to attend class or work.”

Yet the main issue, Tang said, is the process of governance. “Collective governance, inclusive of both students and student governing bodies, will be important to maintain the spirit of equity so key to the College’s contemporary mission,” she said.

Student organizers of Sept. 20’s Climate Strike did not significantly alter their planning due to the policies, said Sabrine Brismeur ’22, one of the organizers. In moving the strike from the originally-planned time of noon to 4 p.m., organizers considered the policy’s statement that protest could not interfere with academic operations, but their decision primarily aimed to make it easier to participate, Brismeur said.

Some student organizations, including EphVotes  — a new registered student organization seeking to encourage voter registration — believe they have had materials removed due to violations of the guidelines for campus postings. However, the office of student life has not yet begun removing posters, according to Douglas Schiazza, its director. It is possible that an unauthorized party removed posters.

“I feel that a comprehensive email to all student groups about the regulations regarding flyering and much more would be greatly appreciated,” EphVotes President Solly Kasab ’21 said. “We should have been more vigilant, but there’s been a lack of communication.”

The guidelines set limits for the duration that postings can remain up dependent on their size and require that all postings “clearly indicate contact information for the person or group responsible for the posting as well as the current date.”

Tang emphasized the need to preserve avenues for students to provide input in College governance, especially since student expression has preceded profound change at several points in the College’s history.

“Student protest has established some of the keystone policies and programs of Williams College, especially for minority or otherwise underserved students,” said Tang, who cited Latina/o studies, Africana studies and MinCo as results of student protest. “I don’t know if that same kind of speaking power and reform power is within our reach today.”