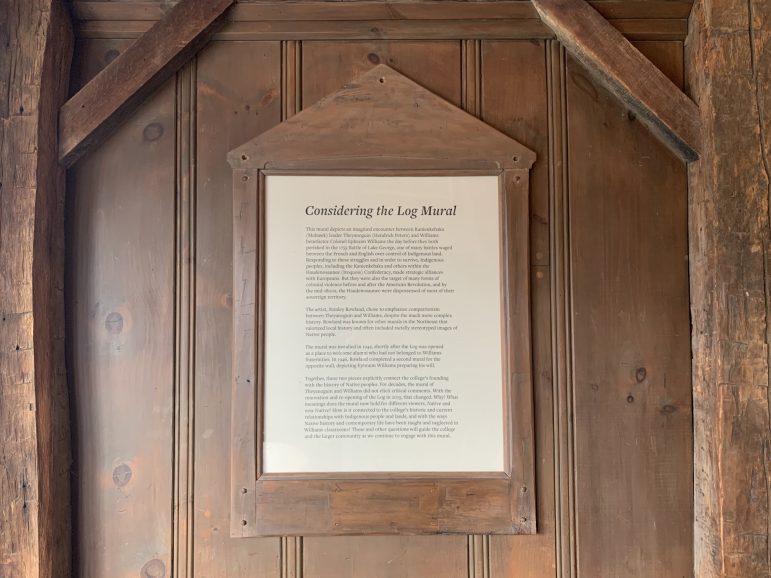 A label has been added to contextualize the depictions of Native people in a mural in the Log. (Nicky Wu/The Williams Record)

Last month, the College hung an informational label beside one of the murals in the Log, fulfilling a 2016 recommendation made by the Committee on Campus Space and Institutional History in response to controversy surrounding the mural’s depiction of Native Americans.

After the Log reopened following renovation in 2015, a 1942 mural, depicting Ephraim Williams with Colonel Titcombe, Mohawk Leader Hendrick Theyanoguin and Mohawk soldiers on a battlefield in 1755, sparked controversy among students, faculty and staff for its stereotypical portrayal of Native Americans.

Then-president Adam Falk responded by covering the mural and forming the Committee on Campus Space and Institutional History. The committee included faculty, staff and students, and was chaired by Professor of History Karen Merrill. Falk increased the number of students members from the original plan of three to six following student concerns about their underrepresentation on the committee.

The committee released a set of recommendations in spring 2016 instructing that the College should retain the mural while installing a label and creating a website to provide historical context. The report recommended “that the mural stay in the Log and that the College assume responsibility for providing ‘contextualization.’”

In arriving at this conclusion, the committee uncovered the mural and gathered responses in a forum. “While hardly a statistical sample, of the 55 handwritten responses about the Log mural in notebooks we left in Log, only 3 responses indicate the mural should be removed from the space, and responses at the forum on April 24 uniformly supported keeping the mural uncovered and in the Log,” the report explained.

Merrill, who chaired the committee, explained the gap in time between the release of the initial recommendations in 2016 and the installation of the label in 2019. “None of the delay has anything to do with those students at all or the committee as a whole,” she said last Friday in an interview on Press Record. “Some of it had to do with some discussions and disagreements that I as a chair was having with the College about how to set up some of the larger contextualization of the mural. Some of the delay had to do with other challenges I was having to deal with, external to my work at Williams.”

Ariana Romeo ’19, a student representative on the committee at the time, a member of the Tohono O’odham Nation of Arizona and a current clerk at the House Subcommittee for Indigenous Peoples of the United States, felt that the project was left in “administrative limbo” for a few years. “The slow reaction to our committee’s output did not match the swiftness of action that resulted in our committee’s establishment — which felt weird and lopsided to me,” she said. “I was relieved to discover that one of President Mandel’s first priorities as the College’s new president was the follow-through of this project.”

The recommended label was hung up last month in the Black Room of the Log beside the 1942 mural. Titled “Considering the Log Mural,” the four-paragraph label describes the historical context of the image, explaining that the scene took place during “the 1755 Battle of Lake George, one of many battles waged between the French and English over control of Indigenous land.”

The label points out that the artist, Stanley Rowland, was known for murals that racially stereotyped Native people and glossed over history. “[Rowland] chose to emphasize compatriotism between Theyanoguin and Williams, despite the much more complex history,” the label reads.

The label ends by asking questions of its viewers: “What meanings does the mural now hold for different viewers, Native and non-Native? How is it connected to the college’s historic and current relationships with Indigenous people and lands, and with the ways Native history and contemporary life have been taught and neglected in Williams classrooms?”

Romeo said she appreciated the label’s open-ended questions but recognized the inherent impossibility of the label’s mission. “I don’t think anyone could create a chat label that would holistically ‘contextualize’ Stanley Rowland’s mural in 250-300 words,” she said. “I hope that those who may approach the mural in the future also understand that this label remains incomplete and that there will always be more things to say about it.”

Despite the label’s context and the committee’s research, Merrill is unsure why such a piece was painted in the Log to begin with. The committee researched the history of the Log, learning that it was originally built to welcome back alumni who did not belong to fraternities. “Does that have any association with the decision to accept a piece that then ties the history of the founding of the institution with Native people?” Merrill asked. “I have no idea, it’s one of the weirder pieces of the Log’s history.”

In addition to advising the label, the committee recommended changes to the Log as a space at large. “The Log is neither a student-centered nor a student-‘owned’ space,” the report said. Citing sports memorabilia and the space’s management by a private vendor, the report recommended that the College revisit the decorations in the Log to reflect the wider range of student activities beyond athletics.

Falk also tasked the committee with examining public art and representations of the history throughout the College. The group released a final report in the spring of 2017 with expanded recommendations that considered the public landscape of the campus in general, specifically examining the Faculty House, the ’62 Center for Theatre and Dance and the Haystack Monument.

The report also included a list of guiding principles, based around the idea that every element of campus is unique. “Our experience as a committee has shown that no universal policy can appropriately address the many different historical spaces that are or will come under scrutiny,” the report said. Some of these principles included centering the College’s educational mission, considering the range of people who use a given space and viewing the portrayal of history on the College campus as inherently public.

Merrill hopes that the College community will continue to look around and ask questions about public representations of history. “I have no doubt that there will be certain of these that will flare up from time to time,” she said. “I think those are opportunities for us as a community to think about them and their place on campus and what to do about them. I think we live on a campus that has a deep history, and we will have to continue to reckon with it.”

In light of the broader mission of the committee, Romeo pointed out that elements of the recommendations remain incomplete. “It’s important to note that a few of our recommendations are still outstanding — namely, our advice to the administration to critically examine the College’s historic relationship with Native communities and to decide what such a relationship spells out for the College in the present,” she said.