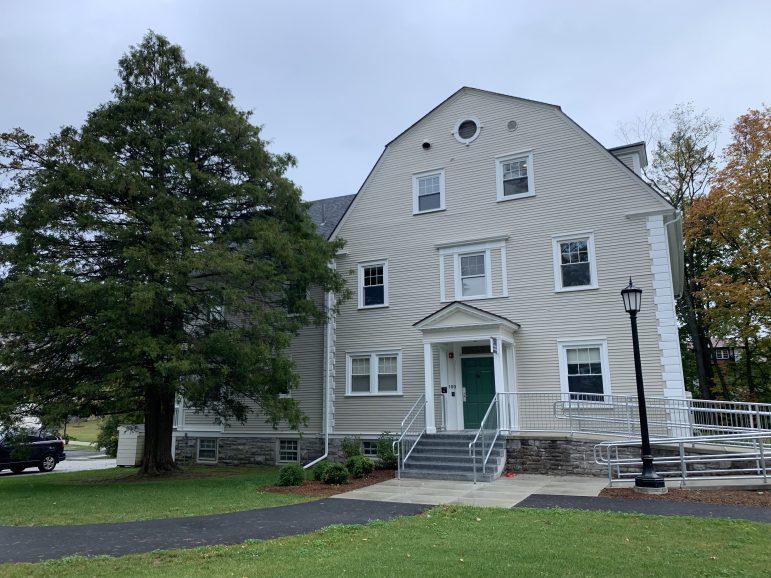 In October 2016, Vice President for Campus Life Steve Klass announced that Wendy Adam would be appointed director of Psychological Counseling Services (PCS). That same week, Erin Hanson ’19 launched a petition on change.org titled “Williams College: sell 4–5 marble slabs to pay for a new therapist at the Health Center.” The petition, which garnered hundreds of signatures, called for the College to expand PCS in order to meet student need, particularly by reducing wait times to see a therapist.

The PCS staff at the time included eight clinicians, three of whom were post-graduate fellows on two-year contracts. According to Hanson’s petition, there were three staff of color. In November 2016, a Record survey showed PCS’s approval rating at 60 percent, down from 86 percent the previous May.

PCS is now known as Integrative Wellbeing Services (IWS), a change that Adam says represents a substantive shift in the College’s philosophy toward mental health. The therapists at the time were already well-prepared to treat mental illness, according to Adam, so her approach centered around broadening the range of services to include options aimed at fostering students’ general wellbeing in addition to providing clinical psychological services.

“It felt like we needed a shift that was bigger than just providing more and more treatment,” she said. “Williams had been known for a very long time for having some of the top clinicians around. I was looking at how to take what’s already good at Williams, which was the level of psychotherapy treatment, and then strategically blend it with some of these other ideas.”

In the months leading up to her appointment, Adam published a book on “holistic engagement,” a concept closely related to the “integrative wellbeing” that she promotes at the College.

“We want to look at meeting students’ needs physically, psychologically, emotionally, socially, spiritually and from a community perspective,” she said. “In addition to traditional mental health care, like psychological counseling or psychiatric care, there are other aspects to student wellbeing that are important for us as a team to keep in mind.”

During Adam’s time leading IWS, the staff has expanded significantly, opening up the possibility for clinicians to take on more varied roles. The roster currently includes a core staff of seven full-time therapists, one half-time psychiatrist, two part- or close to full-time psychologists, three Master of Social Work interns and three post-graduate fellows, along with Adam, who does emergency clinical work and runs regular group sessions. IWS also employs six contract therapists who are brought in when demand is high.

Adam said that hiring efforts in recent years have concentrated on bringing in therapists who can serve a diverse community.

“As we hire staff positions, either through our training program or from the outside, we’re looking for people who are committed to providing multicultural care,” she said. “We have an interest in meeting the needs of a very diverse student population here. The only way we can do that is to practice from a multicultural perspective that honors identities of all kinds; that looks at the intersectionality of those identities; and that looks at how students navigate their home culture—whatever that is—as well as the culture at Williams.”

The expansion of IWS staff in recent years mirrors a sharp rise in demand for mental health services across the country.

“We are in the midst of a well-documented national crisis in mental health among the college-age population, with data indicating that rates of depression and anxiety, suicidality, self-harm, isolation, extreme loneliness and other concerning states on college campuses across the nation have increased significantly each year since 2011,” Klass and Adam wrote to the Record.

Adam said she believes these national trends warrant continued efforts to extend IWS’s treatment capabilities. “We’re staffed much better than any college counseling center in the country, but I don’t believe that we’ve peaked yet in terms of need,” she said. “Because of that, I’m not going to start relaxing about how big our staff is or how well equipped we are.”

Adam attributed the increased demand for mental health services to the challenges of the modern world. “There is a way that ongoing access to media all over the world is making it difficult for this generation to ever have rest — not sleep, but rest — where you’re not being constantly stimulated by some kind of news, some kind of threat, some kind of anything,” she said. “This generation is bombarded constantly, and they have a lower tolerance for those moments of distress where you’re waiting for something to be different.”

Staff Therapist Karen Theiling, who served as interim director of PCS before Adam was appointed, said she believes students face challenges of a different nature today than when she came to the College in 1991. “There’s a perception of the world as a more dangerous place,” she said. “9/11 happened. I feel like people are carrying more stress and more worry. The world feels more complex, and people feel more pressure.”

Adam pointed to social media as one particularly prevalent negative influence. “This generation has grown up with a lot of messages that say you should just be happy all the time, and you can look great all the time,” she said. “We’re living in a time where if you’re happy all the time, it’s kind of creepy — you’re clearly not tuned in to what’s going on in the world. One of the things this generation needs our support in developing is the recognition that a healthy human being … can experience the full range of emotions.”

In Adam’s view, young people can have difficulty grappling with the fact that they cannot alter their emotions with the same speed that they can absorb information online. “If I’m used to being able to change not knowing to knowing immediately, then when I’m sad and I can’t change sad into not being sad immediately, I think there’s a bigger crisis,” she said. “That manifests as a lower distress tolerance.”

Theiling noted that the longstanding stigma around mental health services is slowly fading, leading to an increase in demand. “When I first came here, we didn’t do groups; we sat over in the health center, and students had to come to us,” she said. “Stigma was higher. I feel like the more savvy students get about how we can be useful, and the better we are at our jobs, the more demand.”

Staff Therapist Michael Grinnell agreed. “More young people are seeking mental health services while in college, and it could be because of a destigmatizing movement around mental health,” he said.

Data from the 2018-2019 academic year corroborates claims of heightened demand and expanded services. During that time period, Klass and Adam said, IWS provided individual clinical services to 647 students — over 30 percent of last year’s total student population and a 67 percent increase from the 387 students seen during the 2009-2010 academic year.

According to Klass and Adam, the ratio of students to therapists across higher education nationally — including both colleges and universities — is around 900:1, while the College’s peer institutions tend to be closer to 400:1. In contrast, the current ratio at the College is slightly lower than 145 students per therapist.

The high number of clinicians allows IWS to pair students with clinicians promptly. Adam, Klass and Grinnell each stressed the importance of responding efficiently to student demand. “It’s really important to not have a waitlist,” Grinnell said. “I think a lot of times students will suffer in silence, so when they finally do make that outreach, it can be really risky to not be able to meet that person in a timely manner.”

Last year, there was no waitlist for accessing therapy through IWS. “Students were generally scheduled for an initial assessment with a therapist within one business day and, with the exception of students choosing to wait for a specific chosen therapist or a very specific appointment time, students were placed with a therapist within 3 business days after the initial assessment,” Klass and Adam said.

Meanwhile, the total number of scheduled psychotherapy session hours has grown by 260 percent over the last decade. That increase is due in part to the fact that students can schedule as many visits to IWS as they need. “Unlike other colleges and universities, we don’t cap our sessions,” Grinnell said. “I love that about Williams. We can really spend time building relationships with our student population. Therapy may not always feel linear — it might take some time to feel like consistent progress is being made.”

Theiling said the lack of session caps goes hand in hand with the decision to offer sessions free of charge. She added that not having to negotiate the insurance process allows therapists to concentrate less on the diagnosis and treatment of mental illnesses and more on addressing the general needs of their clients, which can take time.

“In my private practice, if someone came to see me, I had to justify their appointment to their insurance company using a diagnosis,” she said. “One of the things I love about this job is that you don’t have to have a serious diagnosis to work with us. I don’t have to worry that, if you’re having a hard time but you don’t meet all the criteria for depression, I’d have to stop seeing you after a certain time even if it would have been more effective for you to stay longer.”

Adam said the practices that fall under the umbrella of integrative wellbeing would not be possible if therapists were restricted by the traditionally diagnosis-driven model of individual counseling. “The old model is really focused on illness, where you have to be ill in order to deserve support or deserve connection,” she said. “What we’re saying is that you deserve to be valued, to be seen, to be heard, to take your experiences seriously and to take your emotional world seriously, and that illness isn’t the requirement to deserve that connection.”

Many of the initiatives currently offered by IWS aim to teach wellbeing in an entirely non-clinical setting. “We’ve got tons of groups and offerings, where we want to meet students where they’re at,” Adam said. “That’s why there are so many ways of inviting students in. We don’t want that old story of ‘You have to be mentally ill to see a therapist’ to get in anybody’s way.”

The focus on teaching habits of wellbeing in addition to treating disorders, Adam says, fits into a larger aim of addressing the needs of the generation as a whole. “Williams students end up going out and being leaders in all these different fields,” she said. “If we can teach Williams students how to honor the needs they have in heart, mind, body and spirit, give them real skills that they can use, that’s how we start to have large scale change. My dream is to start to see a really big shift in this because of how much reach our alums end up having out there.”

This is the first of two articles focusing on IWS. The second will discuss staff and recent IWS initiatives.