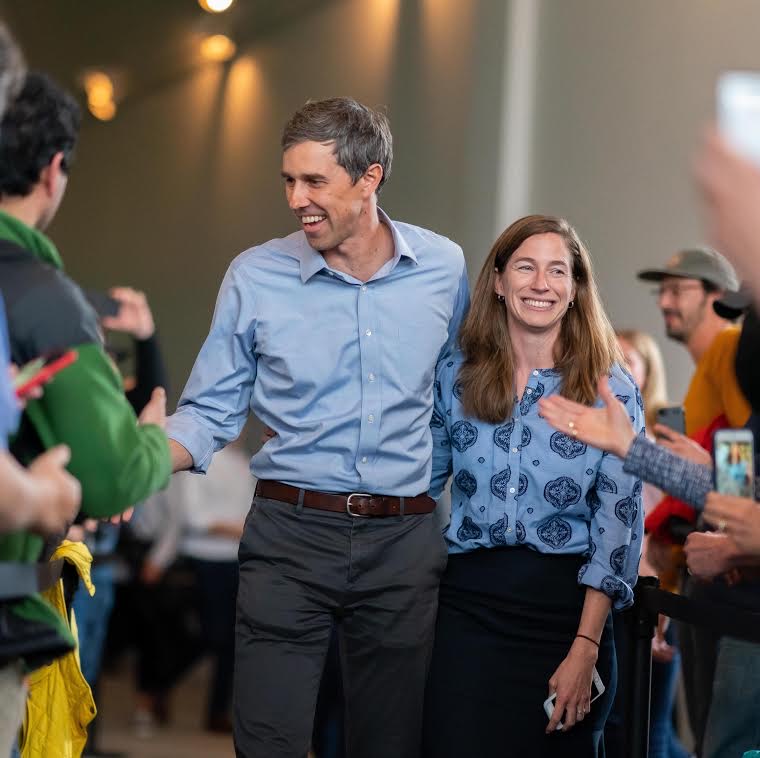 Before Monday, no one had asked Amy Sanders O’Rourke ’03 whether she wants to be first lady. She laughed when I inquired and replied, “The idea of being first lady is honestly somewhat surreal.

“The first ladies of my lifetime have just been these incredible, fearless women,” she added. “It is hard to imagine myself being in their shoes, but certainly [they are] amazing examples to aspire to.”

O’Rourke, an educator who founded La Fe Preparatory School in El Paso, Texas, and works part-time for the Council on Regional Economic Expansion and Educational Development, is becoming one such inspirational figure as her husband, former Texas Congressman Beto O’Rourke, seeks the Democratic presidential nomination. If he wins the upcoming primary and the general election next November, she will reckon with the surreal experience of being first lady.

The O’Rourkes are familiar with both national government and intense campaigning. Beto represented Texas’ 16th congressional district from 2013 through 2019 and served on the House Committee on Veterans Affairs, the House Armed Services Committee and the House Committee on Homeland Security. During those years, the family continued to live in El Paso and maintained a relatively ordinary routine as Beto flew to Washington, D.C. on Monday mornings and returned on Thursday nights.

That consistency was upended during the 2018 election season, however, as Beto rose to national prominence when he challenged Sen. Ted Cruz (R-TX) for his Senate seat. Though Beto narrowly lost that race, he received more votes than any Democrat in Texas history despite refusing donations from political action committees and corporations. He also became well known for his casual attitude, love of punk rock and visits to all 254 counties in the state. Amy said she joined him on those trips when her schedule permitted.

But well before hitting the campaign trail, she was a psychology major and Spanish minor at the College. “I had the most incredible experience at Williams,” she said. After spending most of her childhood in New Mexico, she enjoyed living in New England: “The sense of community was really important to me.”

Now, she is traveling to communities across the country to advocate for her husband. This summer, she and their children, Ulysses, Molly and Henry, accompanied Beto around Iowa in an RV. “We all had an amazing time,” she said. She has also joined him for debates and has recently begun taking solo trips.

She explained that when she traveled alone to New Hampshire several weeks ago, she “wanted to be almost an extension of Beto… He is most energized when he is hearing people’s stories, when he hears challenges that people are going through and when he hears about solutions coming from different communities. It really helps inform how he thinks about the issues, but when you’re running a national race, it’s hard to get all of those stories and be in all of those places, so I am trying to do that myself.”

In an effort to collect stories to discuss with Beto and their team, she hosted a roundtable on gun violence prevention and also visited Las Vegas for a Latina business roundtable. “The stories that I heard and the perspectives of the challenges and opportunities are so powerful,” she said. “You can’t help but leave that and feel a lot of urgency to try to do something to address it.”

Indeed, she believes that there are many pressing issues at stake during this election. “Number one is…getting our country back on track and having a democracy that we can all believe in,” she said. “I think there’s so much at stake now under this current administration, so that needs to be called out and talked about directly, even if it’s not the most politically easy thing to do.” She also emphasized the need to address healthcare, the cost of prescription medicine, stagnant wages and gun violence.

These concerns reflect many elements of her husband’s platform, which includes opt-in Medicare, ending family separations at the border and expediting paths to citizenship, investing in the climate and expanding access to abortion.

“The way that Beto and I think about policy is usually in large part because of the people we have met and the stories we have heard,” she said. “Because we are, day-in and day-out, sharing those stories with one another, I feel like we’ve both come to look at the policy in very much the same way. I’m sure there are minuscule differences, potentially, on certain issues, but we really see eye-to-eye on almost everything related to the policy that he is putting forward.”

Lately, Beto has also publicized the core initiative of reducing gun violence. He has amplified this commitment in the wake of the mass shooting that occurred in El Paso on Aug. 3, when a 21-year-old white nationalist entered a local Walmart and killed 22 people and injured 24 others with a semi-automatic rifle. Amy shared that El Paso is an “amazing community where people work, play and live on both sides of border” and that “everyone here was just horrified” by the shooting, which is being investigated as domestic terrorism and a hate crime because the gunman posted a racist manifesto online shortly before the attack.

“It was a tragic experience that many people are still living with,” she said. “But what to me was so uplifting was all of the people who came together in the wake of that shooting, who weren’t going to accept that hate and racism, who were going to stand up and be who they are and support one another. It was one of the most beautiful experiences I’ve ever been a part of.”

It also led Beto to proclaim, “Hell yes, we are going to take your AR-15s” during the third Democratic primary debate on Sept. 12. He proposes a mandatory buyback program for assault weapons, and Amy champions the plan. She said that, though she may not have considered it necessary in the past, experiencing the El Paso shooting and studying the number of fatalities caused by such weapons has made it “absolutely clear that you need to get those guns off of the street.”

In response to Beto’s exclamation at the debate, Texas state representative Briscoe Cain wrote on Twitter, “My AR is ready for you.” When asked if she is concerned for her family’s safety, Amy acknowledged that her children have felt some fear. “We’ve been having these conversations with them,” she said. “We can’t say that there is no risk… But you can’t let fear stop you from doing what you know is right… We just have to keep going and not be afraid to say the things that need to be said.”

She demonstrated this boldness as she reinforced Beto’s claim that President Trump should resign. “I absolutely agree that he should,” she said without hesitation. “I was shocked when President Trump was elected, and I have since been surprised at the inaction to remove him from office up until now. I think every day that passes by, there is more and more erosion of the office and administration. It would be in the best interest of our country and the preservation of our democracy.”

Beto, in Amy’s view, is transparent and sincere, equipped to restore trust and credibility to the office of the presidency. “The Beto that’s at home is very much the Beto that is out there meeting people,” she said. She also mentioned that social media has allowed many Americans to observe his true personality since “people are looking for that honesty and human connection.”

Amy and Beto first connected on a blind date and married a few months later. On another early date, Beto told her that he hoped to name his first child Ulysses. She laughed in reply, but when she became pregnant, he brought it up again. Though she repeatedly suggested alternatives, she said that Beto gave her “puppy dog eyes in the hospital,” and that the name now “fits” 13-year-old Ulysses.

Beto, who was once a member of a punk rock band called Foss, also introduced her to the genre. They made CDs for each other a few weeks after they started dating, and they always listened to his punk rock favorites on long drives. She mentioned that she appreciates how he knows the stories associated with each song. Indeed, Beto has acquired a reputation as the punk rock, skater presidential candidate. He was recently parodied by Alex Moffat on Saturday Night Live, and Amy said that she “thought all of the impressions were pretty funny.”

“I am incredibly passionate about ensuring that every child has access to a great school,” she said. “I think that I will forever be actively involved in that, but I am also learning about other issues far more deeply than I ever have understood them before, and I would have to look at where I could have the most impact.”