Mia Herring-Sampong ’20 is ready to shake up songwriting 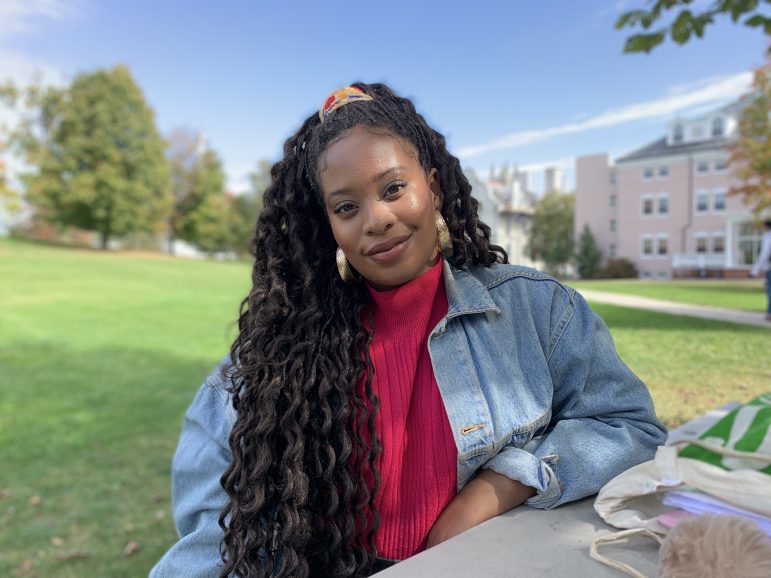 Mia Herring-Sampong ’20 is a singer-songwriter and instrumentalist from Yellow Springs, Ohio. This past Friday she graced the stage at the most recent installment of WCFM’s Live @ the Rectory performances.

Taran Dugal: How long have you been singing and playing ukulele?

Mia Herring-Sampong: I’ve been singing since I was 4 or 5, but I started singing in choirs when I was 7. I’ve only been playing the ukulele since this past June, so it’s really new. I picked it up for songwriting specifically, because that way I can just work on ideas by myself. I grew up playing viola, but you can’t sing and play viola at the same time, so I picked up ukulele.

TD: Who do you consider your biggest musical influences and/or inspirations?

MHS: Well I love jazz, so definitely Etta James, Billie Holiday, Sarah Vaughan. I love Amy Winehouse. It’s such a hard question to answer. I also like more experimental music—there’s this band Stereolab that was big in the 90s that I love. I’m also a big fan of bossa nova, so I love Sergio Mendes and Astrud Gilberto.

MHS: When I first started writing songs I would usually write from other melodies and write my own words, and other times the songs would start as poems and I’d put a melody to them later. Recently I’ve been using my ukulele to pick out chords that I like, and then I’ll record myself free-styling to them. I do that at night when I can’t sleep or have a lot of thoughts, and the next day I’ll listen to it and pick out words I like, and then I’ll try to form a story out of what I’ve already kind of improvised. I try to do that in the studio too, just strum the same pattern and sing and talk and see what comes out.

TD: Have you been going to the studio a lot?

MHS: Yeah, I have! It’s like my fifth class. I’ve been working with Patrick [Gray, the College’s Studio Engineer]. The studio here is awesome. I was going to start recording this summer in Cincinnati but studio time there is super expensive. The fact that it’s free here is ridiculous — the facilities are so nice. I’ve been recording with Adrian [Oxley ’20] and Nick [Madamidola ’20] on drums and cello. I really wanted an acoustic sound, as opposed to something more overproduced or edited. It’s been really nice. I recorded my other songs on my laptop, so the studio quality is definitely a step up.

TD: What were your takeaways from your performance at the Rectory?

MHS: I think the biggest takeaway for me, being a musician, was that I was so worried about not fitting a certain vibe that people might expect when they go to the Rectory shows. My music isn’t very high-energy, and I know that people go to the performances to drink and yell and have fun, but the audience met me where I was, and my music where it was, and they really listened to me. I could see them feeling it and closing their eyes, which reminded me that I can kind of bring the energy into the space that I create with my music, and I don’t have to worry about other people not being there for it, because they will be if they come to the shows.

I also really liked not being on a stage. I sometimes feel like being on a stage can make the show more of a performance than I want it to be, and I really wanted this show to be a conversation, so it was good to be close to people. I could see their faces and I could hear them talking to me, so it was really intimate and special.

TD: As a female artist of color, what’s your take on the Williams music scene, and what do you wish was different about it?

MHS: It’s hard to answer because I wasn’t here last year, and the music scene has kind of blossomed since then.  So it’s an exciting time because it’s really new to me, but also it can be a little tricky. At certain events like the Rectory performances you don’t know if people are really willing to listen. Being an artist of color, it makes everything personal regardless of whether or not I want it to be. Everything I write, everything I sing is related to my Blackness, to my womanhood, to all aspects of my identity. I think it’s really important not to shy away from that and to bring my authentic voice to my performances, no matter how unnerving that might be, because people hear you and relate to you and hear their story in your story. So that’s what I’m trying to bring to the music scene here at Williams: authenticity, intimacy and human connection. Music can be very functional, it keeps people anchored amidst the other moving parts of their lives, and I would like to see more of that here at the College.

TD: Where can somebody find your music, and can we expect more soon?

MHS: My first single, “Bella,” is on Spotify, Apple Music, Tidal, basically all the mainstream streaming platforms. I’m working on an EP at the moment — it’s going to be around six songs, all written by me. I’m not sure when it’s going to come out. The majority of it is done and now I’m just adding harmonies on top of things, so I would say that by the end of October it will probably be out. If I had to assign a genre to it I would describe it as singer-songwriter with a touch of R&B, maybe a sprinkle of jazz.

TD: What do you plan to do with your music after graduation?

MHS: I want to be a singer, man. All I want to do is make music. Which is kind of a scary thing to say, but it’s genuinely where I feel like I belong and where I can connect with and help people the most. I’m kind of figuring out my post-graduation plans at the moment, in terms of where I want to live to immerse myself in artistry, but I know for a fact that I want to follow my true passion, music.