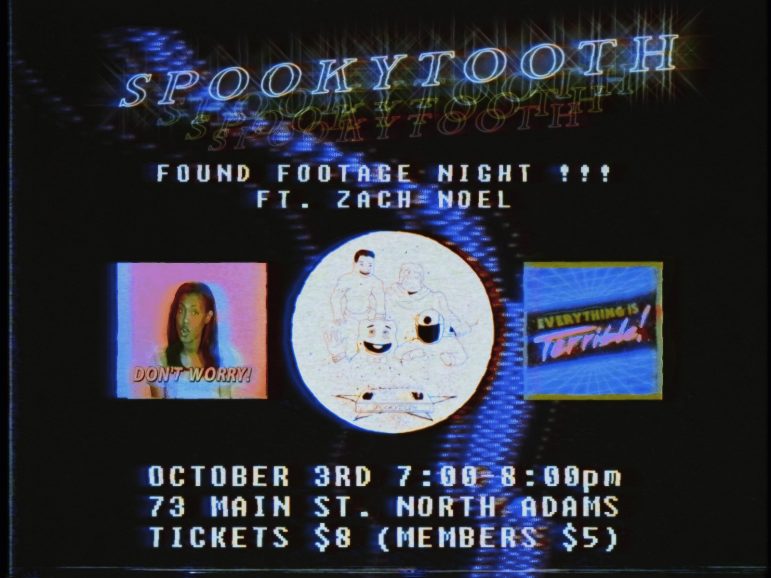 SPOOKYTOOTH and Everything is Terrible! create an array of bizarre content and are planning on creating a pyramid of “Jerrys” (Jerry MacGuire VHS tapes) in the desert. (Photo courtesy of Everything Is Terrible! and Spookytooth.)

Common Folk Artist Collective, located at 73 Main St. in North Adams, is a space dedicated to art in all its forms. Comprising nearly 40 creators as of spring 2019, Common Folk provides a storefront for consignment, studio spaces for visual artists and performance spaces for musical acts. Each week, Common Folk hosts a support space for dialogue around mental health (“Suicide: Let’s Talk About It” on Mondays from 6-7:30 p.m.), live music acts (“Tuesday Tunes” on Tuesdays from 6-7 p.m. at Bright Ideas) and a knitting night (Fridays from 7-9 p.m.). In addition to weekly and monthly events showing the works of Berkshires artists and facilitating dialogues, Common Folk hosts events that bring visiting artists to North Adams. Tomorrow night will bring one such event: Zach Noel, the brain behind the YouTube channel SPOOKYTOOTH and a featured contributor and editor for the online video art collective Everything is Terrible, will present his videos created from found footage at Common Folk from 7-8 p.m.

SPOOKYTOOTH is the type of YouTube channel you can imagine finding after hours scouring weird videos in a somewhat delirious state. Videos like “CHLD MGMT!!!” and “Split” have an eerie, otherworldly feel to them. Perhaps this is due to the process of their creation or even the content itself, which is often full of disjointed and unsettling dialogue. However, these tangible qualities that separate SPOOKYTOOTH’s videos from what we consider to be conventional videography are exactly what makes the work undeniably alluring.

Despite the comedic and nostalgic nature of many of SPOOKYTOOTH’s found footage videos, there is undoubtedly a barrier of discomfort one must overcome when watching them. “CHLD MGMT!!!,” a cut-heavy video that highlights the disciplinary and hierarchical nature between parents and children, contains acted-out family scenarios, a testimonial from two parents and an older man delivering a lecture on parenting styles. The acting in this found footage is overdramatic, reminding the viewer of its age and likely audience. It is shot in a squarer aspect ratio than typical contemporary videos, and it has a grainy composition, static ambient soundscape and cliché transitions. All of these elements situate the video in a particular time period that appears foreign to children and teenagers today.

Underlying the hilarity of cheesy informational footage like that in “CHLD MGMT!!!” are reminders of the dated nature in not only videography but language and conversational topics. There’s a notion of omission as a means of ignoring the problematic past, as exemplified when Noel adjusts the lecturers’ comments with jerky editing techniques and repeats uncomfortable dialogue; at one point, the lecturer uses the term “Sloppy PVF.” Instead of allowing the lecture to continue, he cuts the video’s intermediary dialogue, so the man says “Sloppy PVF” three times in a row. In a more tangible subversion of late 20th century American nuclear households (date not specified), “CHLD MGMT!!!” jumps from lessons to what appears to be a testimonial from two parents where the mother’s introductory dialogue is cut and we only hear her say “badgering and buttering up are my children’s favorite form of parental abuse,” which is immediately followed by what seems to be her husband’s chuckling. The video then ends with a harsh transition into a static reveal of the Everything is Terrible logo, a common motif in many other SPOOKYTOOTH videos.

“CHLD MGMT!!!” is exemplary of SPOOKYTOOTH’s ability to create multi-faceted and comedic, horrific, uncomfortable videos from found footage. On the surface the vidseem to pay homage to nostalgic advertisements, VHS tapes or informational videos, but their weird editing techniques and isolation of particularly asinine dialogue can be read a critique of irrefutably problematic times in American society rather than arbitrary choices for the sake of weirdness.

Taking a closer look at the larger collective from which SPOOKYTOOTH is born, Everything is Terrible, and the 2017 Vice short documentary “The Store That Only Stocks ‘Jerry Maguire’ VHS Tapes | American Obsessions” can help make sense of the confusing and bizarre nature of SPOOKYTOOTH. The nine-minute documentary highlights the story behind the collective’s video store, which opened in Echo Park, Los Angeles in January 2017. The store physically displayed the group’s 14,000 Jerry Maguire VHS tapes which they had been collecting for eight years. Nic Maier, Co-Founder of Everything is Terrible!, explains the group’s end goal is to build a pyramid in the desert housing the collection of “Jerrys.”

Everything is Terrible also creates psychedelic videos from collected footage found in Goodwills and other thrift stores across the country. Like SPOOKYTOOTH and Everything is Terrible’s videos, the pyramid, which will house the group’s current collection of more than 15,000  Jerrys, will be a psychedelic experience, although it will be permanently tethered in its architectural medium rather than the ephemeral nature of a YouTube video. The has not yet reached their goal, as their GoFundMe page has raised about $1,000 of their $400,000.

For those interested in the nexus of nostalgia, Dada-adjacent Absurdism, Camp aesthetics and irrational yet highly effective video editing techniques, SPOOKYTOOTH and Everything is Terrible are great YouTube channels to begin your descent into madness with a bizarre niche of humor. Even better yet, you can begin this journey by seeing the creator behind much of this content, Zach Noel, at Common Folk in North Adams on Thursday evening.