Meet Me at the Clark brings humanity to the gallery 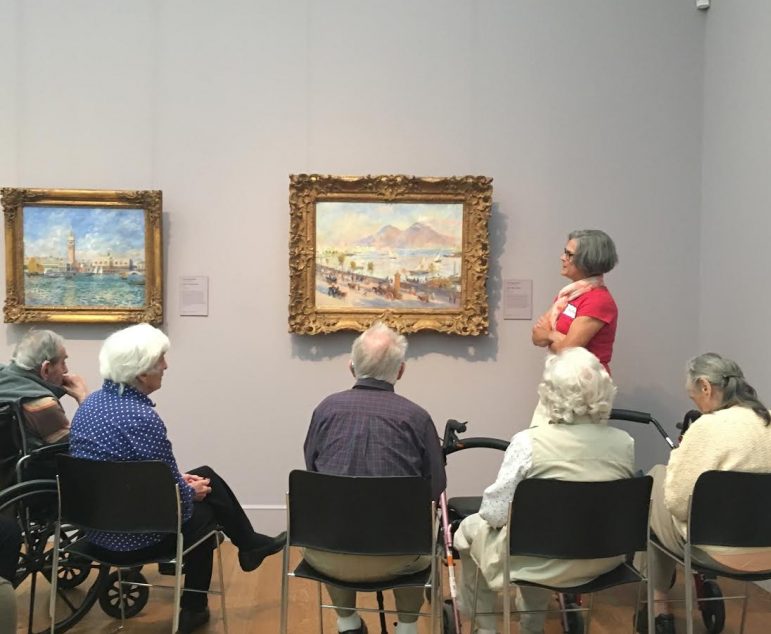 Kathleen, a volunteer docent, leads a lively discussion on Renoir’s “Bay of Naples, Evening,” during the Meet Me at the Clark program. (Lily Goldberg/The Williams Record)

In elementary school, my mother bought me a picture book about a boy who grows frustrated after visiting a museum and hearing multiple patrons refer to a visitor called “Art.” Eventually, the boy realizes that “art” is not a fellow human, but a concept —“art” is all around him.

Ronna Tulgan Ostheimer has her own definition: “Art is the expression or reflection of human experience, imagination and values. Engaging with art makes us more aware of human experience — once you’ve connected the idea that all people have equal value even if we’re each different, then it makes you operate in the world in a slightly different way.”

Tulgan Ostheimer is the director of education at the Clark Art Institute, and the founder of Meet Me at the Clark, a program that offers gallery talks for adults with dementia and their care partners on select Mondays when the museum is closed to the public. The program, run by volunteer docents, draws participants in groups from care homes all over the Berkshires, as well as local individuals. Through conversations about art, Meet Me at the Clark hopes to create a safe and educational space for both individuals suffering from memory loss and their care partners.

On this particular Monday, I am tagging along with participants from a Berkshire County nursing home. Keely Kempster Sarr, the Clark’s new Coordinator of Family and Community Programs, is also watching. She confides that it is her first time observing the program. Thankfully, we are in the company of veterans — Peter and Mary, two docents who have been with the program since its conception in 2013, hang with us towards the back.  “Today’s program,” states our primary docent Kathleen in a clear, strong voice once the full group is assembled, “is called ‘The Way We Move.’” The way the group moves varies by person – among a bevy of wheelchairs and walkers, I am suddenly conscious of my own legs.

Meet Me at the Clark is modeled after Meet Me at MoMA, the first major museum program for individuals living with dementia; Meet Me at the Clark was implemented through training that Meet Me at MoMA developed for institutions looking to adopt a similar program. Though educational programs have existed since the 1960s at the Clark, early educational programs were chiefly curatorial. Now, the Clark’s education department prefers a more engagement-based approach.“Art museums in general are going through a paradigm shift, just the way liberal arts colleges are going through a paradigm shift: Whose knowledge is it that we value, from whose perspective?” said Tulgan Ostheimer. “It’s not necessarily true that we haven’t done our job if you leave here without having learned about a particular object, but you’ve probably learned about yourself, about social interaction, about so many other things with the object being the focal point, and that’s okay with us.”

As our group migrates from painting to painting, I am struck by the overlaps between my college curriculum and this one. When discussing Frederick Remington’s “Dismounted: The Fourth Troopers Moving the Led Horses,” a rambunctious painting of some Wild West galloping stallions, Kathleen points out that all four of one horse’s hooves are off the ground, citing Eadward Muybridge’s 1878 motion studies that proved that horses galloped that way — Muybridge’s study, she explained, was the model for future painters of motion such as Remington, whose 1890 painting incorporated Muybridge’s findings. Muybridge’s motion studies had come up in my sociology course first semester freshman year — seeing his findings contextualized by Kathleen, I was learning alongside the participants.

This, of course, is Meet Me at the Clark’s goal: by creating a space that is educational for care partners and participants alike, the Clark temporarily removes the barriers that have been created between care partners and those they look after. “It can be really frustrating and depressing and distressing for both the care partner and the person with dementia when you aren’t able to go out and do the things you did when you weren’t ill,” explained Tulgan Ostheimer. “A program like this sort of restores respect both to the person with dementia but also respectful interaction —there’s not one person caring for the other. Both presences here are equally valid.” In our group, this was certainly true — care partners were eager to offer up ideas for interpretation alongside those they accompanied. Peter, the veteran docent, cracked jokes from the back.

Passing from Remington to Renoir, Peter explains to me that beyond general docent training, it is up to the individual docent to review and research the paintings on which they will be presenting. “I know very little about art in general,” he confides. “But I know a lot about the art in the Clark’s collection.” Although art is the mode through which the individuals in the program engage, the focus of Meet Me at The Clark is the stimulation of the parts of the brain which process art.

Tulgan Ostheimer’s background is not in art history but in psychological education, which drives her interest in how art can interact with the mind. “Research shows that visual memory can trigger emotional memory, which can help long-term cognitive memory,” Tulgan Ostheimer explains. “One of our primary docents for this program is Lydia Littlefield — the first year, Lydia was here with her dad and he had been pretty noncommunicative for a long time, which was painful for her since he was a former professor. When they came here, for the first time in, I can’t remember if it was months or years, he spoke. On the bus ride home, he put his arm around her, and she put her head on his shoulder, and it was the first time in a while she had thought ‘Oh, this is my dad,’ not just this person she needed to take care of. He died three weeks later, and she wrote us a letter telling us how life-important this episode had been, because it shifted her whole relationship with his death. She then joined the program as a docent and is now our lead docent for this program.”

At some points during the program, the different cognitive abilities of the participants stand out more strongly. None of the participants, for example, can quite place their finger on what time of day Renoir’s “Bay of Naples, Evening,” might depict. Slowly, however, the group figures things out together. Gazing into Corot’s “Bathers of the Borromean Isle,” a painting of two nude bathers in a wide stream, one man who was rather quiet in the beginning of the program, begins to speak rapturously about the way the sunlight changes color when it is reflected in water. It is as if he is noticing the properties of light for the first time — perhaps he feels he is. “Aren’t we right in this picture?” asked Kathleen. “Aren’t our feet getting wet as we voyeur?”

As I absorb the painting, and watch my fellow participants absorbing the painting, it occurs to me that art is a realm where imagination is more important than memory. The names of Corot’s bathers or Remington’s horses have long been forgotten, and they are not the concern of Kathleen or Peter. What Meet Me at the Clark asks us to do is not to recall and retain, but to reimagine — not only the possibilities contained within a painting, but the possibilities for how our own relationships might change and grow. It is in reimagining that we can learn to meet individuals where they are — fiercely, patiently and with love.