Hitched and living on Hoxsey: Lara and Jason Meintjes ’22 settle into life at the College 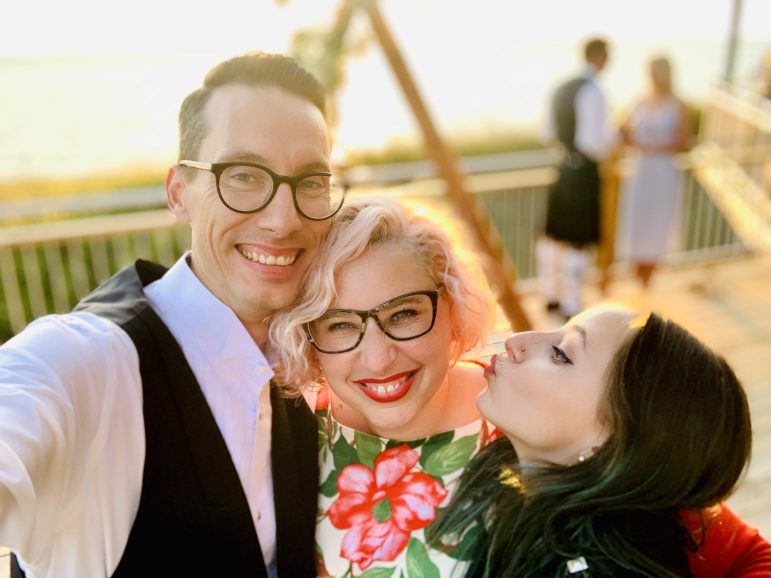 “Imagine yourself in a tutorial at Williams,” one of the questions on the College’s application reads. “Of anyone in the world, whom would you choose to be your partner in the class, and why?”

For Lara and Jason Meintjes ’22, the answer was obvious. When the married couple applied to Williams as transfer students, they wrote their application essays about each other. This fall, they started at the College as sophomores.

Their path to Williams was a winding one. After graduating from high school in 1999, Jason left his home in Pietermaritzburg, South Africa, for Johannesburg.

“I said, ‘Dad, I’m going to go to the closest big city to become a famous musician,’” he recalled. “And he said, ‘O.K. Have fun with that.’ So, I strapped all of my possessions onto the back of my motorcycle, and I rode the six hours to Johannesburg.”

Lara, who grew up in Johannesburg, dropped out of high school in ninth grade. She then negotiated her way back into school for 12th grade, studied for the nationwide high school certification exams and passed, earning her high school diploma.

“Which, can I say, is kind of phenomenal,” Jason  said. “Lara, at 17, pulled herself together enough to go, ‘I should probably finish high school,’ and also convinced them to let her in. Then she passed all the exams with pretty reasonable grades in the end.”

The Meintjeses met in 2002 at Jason’s house in Johannesburg.

“He was skateboarding on the parquet floor,” Lara recalled. “He had really long hair at the time, and he had it in three ponytails, and he was wearing just a pair of really baggy shorts and nothing else.”

“We kind of did Jason’s motorbike journey here except we couldn’t take a motorbike, because that would have been really, really, really complicated,” she said. “We each had a suitcase — probably not smart. Seriously, three out of 10 stars, would not recommend. That was not a good way to move across the planet, if you don’t know anyone and you each have a suitcase of stuff. And I didn’t even put the right things in my suitcase… I brought a quilt and my favorite teacup. And, like, two pairs of leggings and a couple of T-shirts.”

Lara worked as an artist and Jason as a photographer. In 2015, the two decided to collaborate on a printmaking project, so they enrolled at Long Beach City College, where they hoped to take a course in printmaking. Since no such class was available that semester, they took a public speaking course instead. Their experience in that class led them to take two classes the next semester and three the semester after that.

“[Community college] kind of fulfilled that space, that need, that we hadn’t really ever let ourselves think about too much because we went straight into the workplace and had other ideas out of high school,” Jason said. “Before we knew it, we were full-time students, full-time working, full-time parents, juggling all these things.”

The Meintjeses found out about the College through the Jack Kent Cooke Undergraduate Transfer Scholarship, a program that provides community college students with financial support and college advising as they transition to four-year colleges. After finding out that they were both semifinalists for the scholarship, they applied to a wide variety of schools, from liberal arts colleges to the University of California campuses to Ivies.

“We didn’t really expect to actually get in anywhere,” Lara said. “Then we ended up getting in everywhere except Swarthmore.” “Those bastards!” Jason interjected.

They said the College was exceptionally attentive to their needs throughout the application process. “Besides our local state school, CSU, Williams notified us first,” Jason said. “Then they flew us and our daughter out for Previews. It was then that I realized that I could get so much face time with professors, and the departments were small enough that we wouldn’t be lost at sea.”

The Meintjeses said they were discouraged by the less personalized approach at larger schools, some of which waited until the summer to notify them.

“It’s kind of a difficult position to be in when you’re applying to a specific program at Yale or Brown, and then they notify you quite late despite knowing that you’re a parent, a working professional, and that uprooting your entire life at the drop of a hat is kind of tough,” Jason said.

“We’re supposed to move,” Lara added. “We’re going to find a school for our kid and do all of this stuff. We had to say, ‘Thanks, guys. We like you, but not that much.’”

The Meintjeses moved to Williamstown this summer. Their house is located on Hoxsey Street, the lifeblood of the College’s party scene.

“Someone said to me the other day, in the context of a class, that the only thing Massachusetts soil is good at growing is rocks,” Lara said. “Apparently it’s really good at growing cans of Natty Light as well. Because we wake up in the mornings and they’re crushed all over our lawn.”

“Someone would make a killing if they just walked down there with a bag and recycled them,” Jason said.

Lara said despite the profusion of empty beer cans, she enjoys living on Hoxsey Street. She said she and Jason appreciate being close to campus, surrounded by other students.

“We wanted to have a traditional college experience to some degree, so, yeah, we really kind of like it,” she said. “If you close the windows, you don’t hear the fireworks so much.”

Juggling the College’s workload with parenthood is, Lara said, “pretty intense,” but not because the standards here are higher than at Long Beach City College.

“I find that the expectations are not higher, or that the professors are expecting better work or even really more work — but they’re expecting a lot more reading,” she said. “At community college, professors are really conscious of the fact that students don’t have a whole lot of time outside of class… Williams professors are going to assign 35 readings, and two of them are books.”

Jason compared the burden of schoolwork to that of a full-time job.

“In a sense, we traded one thing for the other,” he said. “I’m no longer working, so I can study more.”

At community college, it was easy for the couple to blend in with the other students. “Your peers are much more accepting because a lot of them are also juggling five jobs, taking care of a sick grandmother and have a full course load,” Jason said.

Here, their life experiences set them apart from the typical student in different ways.

“There are moments when I’ll say something that definitely outs me as being 35,” Lara said. “But then I need to recognize that… for a lot of students, particularly the freshmen, thoughts about sex and that stuff are not everyday, normal things that people will discuss in the classroom.”

Jason, who hopes to teach math at the college level, is a prospective math major, while Lara is a prospective English and environmental studies major. Lara said she would like to become a researcher.

“I’m really interested in how folklore can be used as a tool to interpret different cultures in the way they respond to issues in their environment, particular crises, et cetera,” she said.

They are set to graduate from the College the same year that their daughter graduates from high school. Their next step, they say, is to attend graduate school near each other, if not at the same institution.

Jason characterized the way he and Lara have approached life as “this scrappy thing, where we’re like, ‘Well, we’ll figure it out.’”

“And eventually things work out,” he said. “And we’re here, right?”