One in Two Thousand: Gabby Martin ’21 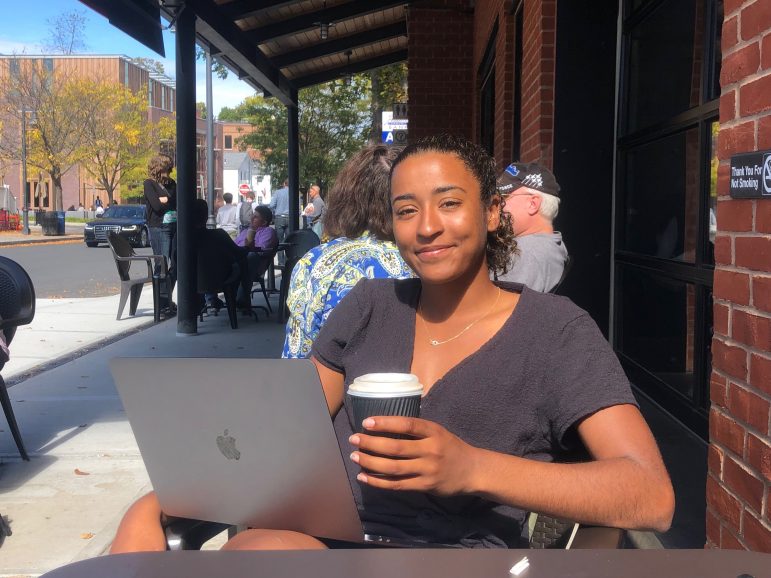 Each week, we randomly select a unix from a list of all current students at the College. So long as the owner of the selected unix is on campus, willing to be interviewed and not a member of the Record board, that person becomes the subject of that week’s One in Two Thousand. This week, the computer (using a very simple script in R) chose Gabby Martin ’21.

So you’re on the golf and basketball teams? Did you always know you wanted to play for both?

Yeah, going into college I just wanted to play golf, but I realized in senior year of high school that I wanted to play both sports, so I started looking at NESCAC schools. For me, Williams was the best choice. It was the most competitive — our women’s basketball team is number one in the nation, and our golf team is really good. Both our men’s and women’s golf teams won nationals last year.

That’s awesome. Any funny stories from the team?

At our golf tournament this weekend, the Amherst team was in a playoff. And their coach, right before the last putt to end the match and win the tournament, farted so loudly in front of everybody. Golf is pretty silent and so we were all trying to hold it in. Yeah, the girl missed her putt. It was so bad. We couldn’t laugh, but [laughs].

Actually, I’m really bad at writing, and since it’s been a weak point, I’ve worked on it at college, and I would say I’ve gotten better. I took a tutorial last semester with Professor Banta. It was called “Infectious and Emergent Diseases,” and it was one of my favorite classes. Since it was a tutorial, it pushed me out of my comfort zone, but after taking that class, I learned so much about my own writing style and how to actually write a paper. The topics were super interesting and kind of scary because it was about infectious diseases, hospital-acquired infections, and that is scary because everyone goes into a hospital!

I hate hospitals! And I haven’t taken a tutorial yet. Maybe I will in spring semester.

Yeah, it’s not for everyone. But my tutorial wasn’t a typical tutorial: we weren’t reading books, but scientific papers.

Super cool. So, you’re a Div. III kind of person. How do you feel about Div. I and Div. II?

I took a theatre class with Professor [of Theatre Omar] Sangare and loved it. I TA-ed for that class, and now I’m doing an independent study about solo performances. I’m working with these live performers and world-renowned actors. Independent studies are awesome because not a lot of schools offer that, where you make our own curriculum. When [my proposal] was approved, I was so happy!

That’s awesome! Hey, is there anything you really want to share? Like a cool fact or a secret?

Hmm… studying at the Clark is very underutilized. It’s so pretty to study at the reflection pool, and up the hill there’s another building. The people at the Clark are so nice, too. They always ask, ‘Do you need anything? Do you want us to pull the umbrella out?’

The cafe is good, and nobody knows about it, really, so it’s nice to be off campus. It’s not that far a walk, but I have a car, so I drive [chuckles]. It’s my favorite place, and I wish more people would use it!

I’ve been once, but I should really go again before it gets cold.

Yeah, at the Clark, you’re working, but you don’t feel so stressed by the Williams bubble.

Speaking of the cold, anything you want to do before it gets too chilly?

I really want to do a sunrise hike or watch the sunrise at Mt. Greylock, but obviously I would drive up for that one.

I went two weeks ago and it was beautiful! Any guesses for which day will be Mountain Day?

I have a feeling it’ll be the second Friday, right before reading period. What do you think of Mountain Day roulette? I think it’s so funny that we have that tradition.

Yeah, it’s always a gamble for me because I have classes on Friday. What did you do last year?

I always go to the Clark and then go up Stone Hill. I was a housing coordinator, and this year I am a residential director, so I will probably do something for my dorms and houses.

Last year, I did a big Dunkin’ Donuts run, as well as Tunnel City, so we all got coffee. This year, I’m hoping to hike the big one! Actually, I went up last year, but because I was injured at the time, I was in a van. I felt so cheated, and everyone was like, “Can I have a ride?” and I was like, “Sorry!”

[laughs] I wish I could go in a van… It’s cool that you’re on the Residential Life Team.

Yeah, shout-out the Residential Life Team! We had a big name change; we were the NLT and now we’re the RLT. No one really knows what we do, but we are the housing coordinators and residential directors, and we host these fun (hopefully fun) community outreach events, like WAD [Williams After Dark] every Friday. I wish people who had ideas would reach out to us because we are trying to get people involved.

Were you guys in charge of the free smoothies this Sunday?

Yeah! People need to know that we are facilitating things like this. I’m gonna plan a food truck festival in the spring, the parking lot of the ’62 Center will have food trucks, and we’ll have fun activities. I’m excited, and I hope people come!