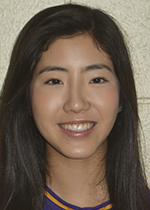 How did you start playing volleyball?

My older sister started playing in sixth grade, so I was in third grade, and being the younger sister, I copied everything she did. She needed someone to practice with, so I just started playing. We went to a nearby club and they had an adult league there, but they would see us hovering on the side so they let us in and helped us. That’s how it kind of started. It’s kind of funny because my mom hates team sports. She golfed in college and made me try golf, but I was like, “Nope, volleyball is it.”

Do you have any volleyball team traditions?

We do this thing called “buddies,” where an upperclassman is paired with an underclassman each year. On one of the last days of preseason, we have a big reveal. In our locker room, Coach [Christi Kelsey] makes a whole yarn maze from one [buddy’s] locker to another. When you walk in, it’s a whole web of yarn and you have to find your buddy. Then, on game days, we give notes and little gifts to each other. It’s a nice pick-me-up. Having a focus on each other is really nice.

Is there something that only your teammates know about you, or a side of you that only they see?

I’m a really deep sleeper. My team and my entry would know this. I’m really hard to wake up, literally you have to pick up my head and shake it. People always joke around and pick up my arm and drop it because I won’t wake up. For the first away game, you room with your buddy and this year, we told the freshmen [about me being a deep sleeper]. But in previous years, we haven’t told the freshmen and they [would] have the hardest time waking me up. They’ll be frantically texting the group chat, ‘Daiana won’t wake up! What do I do?’

Do you and the team have any pre-game rituals?

We have a dance party. [Laughs.] We go in the locker room, play music and just have a big dance party. Hopefully not too big, though, because we still have to go and play a game and shouldn’t be too tired.

“Kill the Lights” [by Alex Newell] is a good one. It starts off kind of slow, but there’s a big chorus beat drop.

If you had to rename volleyball, what would you name it?

I think it’s like a really intense version of Hot Potato and Don’t Let it Touch the Ground. When I have coached and have had to explain it to little kids, that’s how I explain it. I think I would name it that.

Is there anyone who always comes to volleyball games?

So, we have faculty liaisons, Professor Alan [White] in the Philosophy department and his wife, Jane, who used to work in alumni relations and is now retired. They come to every game; they’ve even driven up to Bowdoin in Maine just to watch us. The whole psychology department is filled with really big fans of volleyball too, especially Professors Sandstrom, Fein and Kornell. They all play, so we’ve had “the psych department versus volleyball” day.

You are also the secretary of the Student Athlete Advisory Committee (SAAC). How has that been?

I went to check it out my freshman year and really understood the mission but, as a general board member, I felt like I was part of something but not actually really doing anything fully. So then, I joined executive board my junior year. It’s really about focusing on making the student-athlete experience better and making it a more inclusive environment. We’ve been working really hard to have panels on Claiming Williams Day about the athlete/non-athlete divide and working with higher-ups [at the College] to make it more inclusive and less divisive right at the start [during TeamEph]. We’ve also worked on Training Wise at Driscoll. Oh, and the pasta bowls at ’82 at night.

I didn’t know that SAAC started the pasta bowls. How did you do that?

It was during my sophomore year, I think. During offseason, we have late-night practices that cause us to miss the dinner times. Everyone wanted food that is more filling [than snack bar], so SAAC was like, “Why don’t we get pasta bowls?”