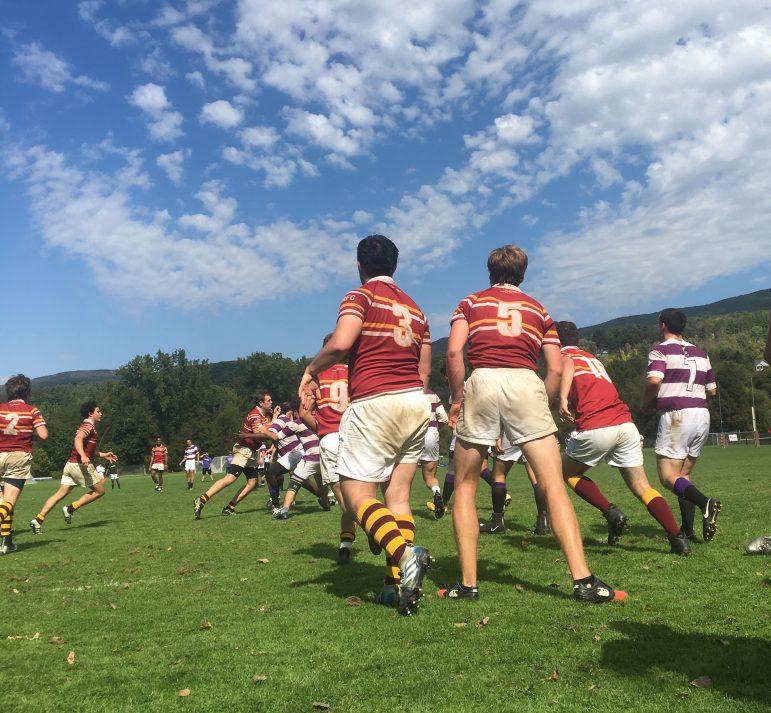 The men’s rugby club team is 1–2 this season after beating Union but falling to Siena and Amherst. (Rebecca Tauber/The Williams Record.)

The men’s rugby club team is 1–2 this season after beating Union but falling to Siena and Amherst. (Rebecca Tauber/The Williams Record.)

Nate Medow ’22 had one of the top plays of the game, scoring three points for the White Dogs. “Nate had a kickoff reception that he ran back all the way for a try, untouched,” team co-treasurer Nicholas Sommer ’22 said. “It was very impressive, around 70 yards.”

Jamie Nichols ’21, head of recruiting and retainment, was impressed with how the entire team played. “I came out in the second half, but was astounded at how well the substitutes played,” he said. “They re-invigorated the whole team and our energy levels spiked up. That’s always been something I value about the club, is our ability to dig deep and find just a little bit more to give. We gave it all, and the substitutes really showed that.”

Although they ultimately lost to the Mammoths, the White Dogs were able to corner their opponent on their side throughout the game. “It was a hard-fought game all the way through,” Sommer said. “There weren’t many breakaways, but we did have a very good kicking game and were able to pin them back in their own half a good number of times, but we weren’t able to capitalize on those opportunities.”

Amidst the sea of purple and gold across Cole Field, the rugby team stood out in their signature maroon, white and yellow, representing the unique history of the team, which spans 61 years. “One of the original founders, as the story goes, was from England and one of his favorite rugby clubs from England had the colors claret and gold,” Sommer explained, adding that the White Dogs mascot was connected to that tradition. “That’s what he brought to the team and made it our official colors. It’s been a legacy that’s lived on.” Another fan-favorite tradition is the team song, sung at every practice and before and after every game.

This was the White Dogs’ third game this season. They previously beat Union and lost to Siena. Sommer remains optimistic about the team’s season. “The season’s been going well,” he said. “We haven’t been getting the game results we’ve wanted to [and] we’re still kind of figuring out the little things, but we played much better as a team than we did last week. Last week, we had many penalties; this week it was just going up against a really tough opponent, and so things are projecting up, but not the results that we’ve hoped.”