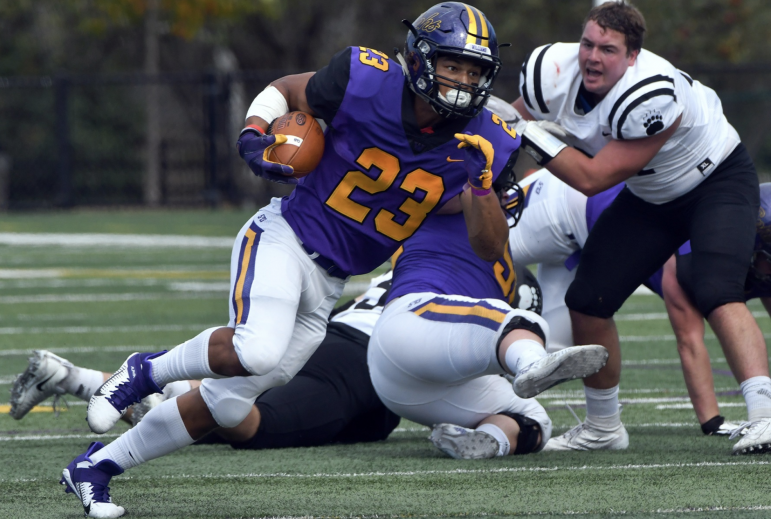 Running back Joel Nicholas ’23 scored two touchdowns in Saturday’s game against Bowdoin, rushing for a total of 104 yards. (Photo Courtesy of Sports Information.)

Running back Joel Nicholas ’23 scored two touchdowns in Saturday’s game against Bowdoin, rushing for a total of 104 yards. (Photo Courtesy of Sports Information.)

Five first-half touchdowns carried football (2–1) to a 41-10 win over Bowdoin (0–3) in its second home game of the season. Four of the scores were long rushes from more than 10 yards away, demonstrating dominant performance on the ground made possible by a strong offensive line.

After the game’s first points from a long Polar Bear drive and field goal, the Ephs returned fire. Running back Joel Nicholas ’23 burst through the gaping hole created by the offensive line and took the ball 61 yards to the end zone, untouched.

Quarterback Bobby Maimaron ’21 led a drive up the field to Bowdoin’s 33-yard line and heaved a pass into the corner of the endzone. Receiver Frank Stola ’21 beat double coverage to the ball and came down in-bounds for an Eph touchdown. This score was Stola’s 22nd in his career, breaking the touchdown receiving record previously held by Darren Hartwell ’13.

The Ephs went on to score three more touchdowns in the first half. First, Nicholas ran 17 yards untouched to the end zone. Then, running back Dan Vaughn ’22 rushed 17 yards before contact and carried a few defenders into the end zone with him. At the end of the first half, the score was 34-10, courtesy of an additional running touchdown from Vaughn.

The Ephs scored one more touchdown in the second half, thanks to a 6-yard run from Maimaron after another fantastic catch from Stola.

Passing did not play a large part in the game for the Ephs, as Maimaron only had four completions totaling 91 yards. Stola accounted for most of these yards, finishing with 69 yards on two catches. On the ground, Maimaron led the way with 127 yards and a touchdown. Nicholas and Vaughn also had over 100 yards and two touchdowns each, leading to a balanced offensive performance.

Defensive back Edward Manzella ’21 led the way on defense with 9 tackles, including 2.5 tackles for loss, and 2 pass breakups.

“It was a great win, especially at home,” said head coach Mark Raymond. “It’s always a great thing when you can rush for the yards we did today. We also got some young guys in the game and got to see what they could do. A great job all around.”

The Ephs are looking to extend their two-game winning streak when they make the trip to Waterville, Maine, to play the Colby College Mules. The game will kick off at 1 p.m. on Saturday.