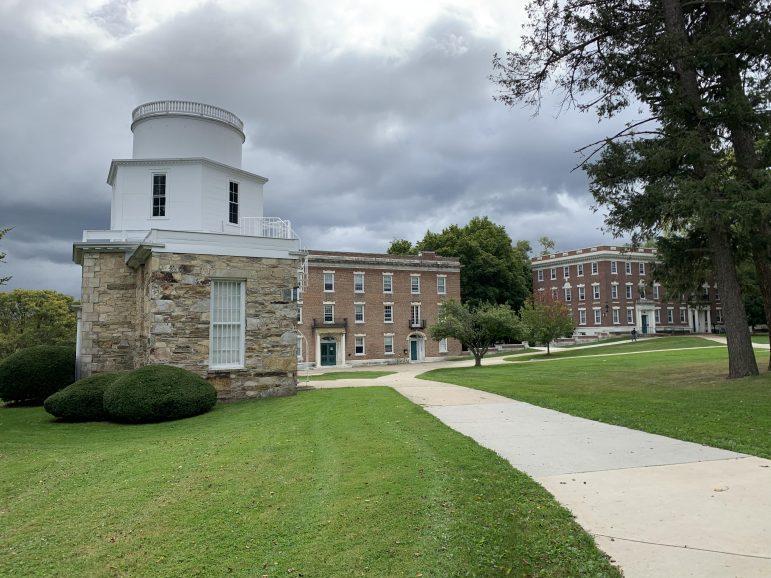 In response to student noise complaints, the Williams College Museum of Art (WCMA) will relocate the installation of Sonance for the Precession, an artistic project that required the placement of speakers outside windows of Currier Quad’s residential buildings, to the Hopkins Observatory building. As part of the installation, speakers played music for 30 minutes at approximately 6 p.m. on several days last week.

The project is the work of Arthur Levitt ’52 Artist in Residence Neil Leonard, who created the project with Hopkins Observatory in mind.

Residents of Currier Quad received an email from Deputy Director for Curatorial Affairs  Lisa Dorin on Sep. 18, one day after the music began, advising them that the project had been installed. According to Assistant Director for Residential Life & Housing Madeline Polidoro, the Office of Student Life (OSL) had not been informed of the project ahead of time. The email notified students that the music was “scheduled to play for 30 minutes every evening starting a half hour before sunset,” and would continue playing daily at progressively earlier times until late December.

Some residents of Currier Quad were upset that they were not given notice of the project’s existence ahead of time. Owen Foster ’22 said he first learned of the project when he encountered staff as they were installing the speakers in his common room.

“I walked into my common room one afternoon and there were two lovely facilities people installing a box on my floor,” he said. “I asked them what it was. They said something to the effect of ‘sound art,’ but that was all they really knew.”

Once the speakers were installed, the music began without warning. Many residents said they were unsure what the noises were meant to be until they heard it was part of a WCMA project. “I thought it was aliens,” said Regina Fink ’22, who is a House Coordinator in Currier.

Other students said they were disturbed by the sound, which was fully audible inside residence halls throughout its duration. Noah Reich ’21, who is a House Coordinator in Fitch, pointed out that the time of day chosen for the music could interfere with students’ afternoons. “Some students like to take naps or do homework in the late afternoon, so the noises would disrupt the schedules of these students,” he said.

Dorin explained the thinking behind the decision to install the speakers on residences. “With the logistical requirements of needing access to power and a computer to run the program, attaching the speakers to the buildings seemed to make most sense,” she said. “We had a sense that the sound might be audible from some spaces inside the buildings, but it was really intended to be experienced from outside. It was not until we were doing the actual installation and testing the volume levels in the quad itself that we understood the impact the speaker placement was having on certain dorm rooms.”

Residents of Currier Quad received an email on Thursday advising them that WCMA staff, accompanied by Campus Safety and Security and facilities personnel, would begin entering residence halls in the following days in order to address student feedback and concerns.

Julia Mariani ’21, who lives in Currier, reached out to WCMA and OSL staff on behalf of the residents of Currier to request that they provide documentation of the residents’ agreement to have the project installed. “When I inquired about any paperwork, guidelines, or prior documentation regarding student consent of art installations in the dormitories, I was informed that they do not exist at the moment but are in the process of being put together,” she said.

Mariani said she shared many of the concerns expressed by other residents of Currier Quad. “Neither I nor the residents of the building consented to this art installation,” she said. “I’m especially concerned with the fact that I was only notified after its installation about a noise that will last for a half-hour a day, right outside my room, for the next couple of months.”

Mariani said that she recognizes the value of art but feels that the installation’s negative impact on student life outweighs its artistic merit. “I fully support the arts here at Williams College,” she said. “I also stand by the needs of the student body. Speaking on behalf of the Housing Coordinator and many residents of Currier Hall, we are concerned with the precedent that is being set forth here with regards to infringement on residential life and student consent.”

On Monday, Dorin sent out another update, advising students that although adjustments had already been made to the placement of the speakers to “reduce disturbance in dorm rooms,” the project would be relocated completely, “us[ing] the Planetarium building for the hub of the installation.”

Dorin said the relocation will address student concerns about the noise level. “With the speakers attached to the planetarium we retain the ability of the sound to move around the quad, and with less direct impact on the interior spaces of the dorm buildings,” she said.

Vice President for Campus Life Steve Klass said the relocation makes sense given the fact that the installation was designed with a focus on Hopkins Observatory. “I personally love public art and hope that this relocation finds that sweet spot between allowing the work to remain while minimizing its impact on campus residential space.”