After camping out overnight, seniors make carrels their own 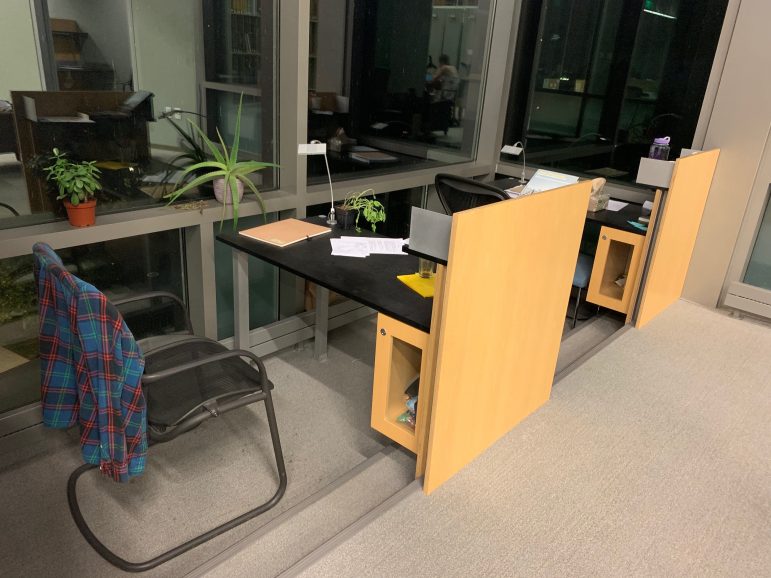 Seniors have begun to add personal touches, including potted plants, to their study carrels in Sawyer. (Nicky Wu/The Williams Record)

A couple of months ago, I was having lunch with a College alum who graduated in the ’80s. As is often inevitable while talking to alums, we ended up comparing our experiences of campus. Enthusiastically, she asked, “How do you ever leave Sawyer? Why would you? With a view like that, I would live there!”

Because of the library’s breathtaking view overlooking the Purple Valley’s iconic mountains, the architects of Sawyer’s new home (the library having previously been in between Hollander and Schapiro Halls) decided to add another feature: study carrels.

Sawyer has two types of carrels. The ones located on the third floor along the east side of the building are called “flippers” or “sawtooth” carrels, while the ones along the north side are “step-downs” and were inspired by the library’s light wells, according to the College’s website. Schow’s carrels, meanwhile, are scattered among the library in its labyrinth of shelves.

With these open and beautiful work spaces, it is no surprise that the competition for carrels is intense. This year, carrels were assigned on Sept. 9 for senior thesis students and the following day for seniors not writing theses and juniors.

The carrel journey starts with the location. Location is everything. Some prefer the bright lights of Sawyer, while others prefer the white noise of Schow. Connor Marti ’20, an astrophysics major, said Sawyer’s natural light was a big push in his decision for a carrel in Sawyer, while Schow was “too dark, sad and quiet.” Some students, like Tania Calle ’20, a political science major and public health concentrator with a carrel in Sawyer, want only a “regular workspace to develop” their theses.

The competition and excitement for study carrels is much like it is for WALLS. Students camp out the night before, armed with sleeping bags, ready to claim their carrels. Carlos Cabrera-Lomelí ’20, a political economy major and Latina/o studies concentrator, brought his mattress straight from WALLS to Sawyer.

“I was planning to camp outside WCMA Saturday night to get a good spot in line for that event, but didn’t have a tent or a sleeping bag,” he said. “So I carried my mattress across campus and plopped it outside WCMA and later realized it’d be so easy to move my mattress to nearby Sawyer.” Cabrera-Lomelí was able to get his first choice — one in the corner on the fourth floor with two large windows and an abundance of sunlight.

Calle also got her first choice, which she described as the “the holy trinity of carrel needs: central (third floor), sunlight (my succulents are really happy) and a view.” Even Marti, whose carrel location wasn’t his first choice, said he was happy with his step-down carrel on the second floor, getting the “Vitamin D” he said he had desired.

Now, several weeks after picking their carrel, students are enjoying their home away from home. Walking alongside the carrels in Sawyer and Schow, one can see the personalities of their owners come to life through decorations and books adorning the desks.

Calle, who is writing her thesis about the impact of punitive immigration policies on the health of Latinx residents, has decorated her carrel with poems about the Latinx experience and struggle. “When the world feels a little heavy, I print out my favorite poems and posters related to immigration,” she said. “‘Home’ by Warsan Shire helped me get through some really tough times and is taped on the side of my carrel.”

Eventually, the school year will come and go, and these carrels will get new owners. If you are looking to pick a carrel next year, current owners have some words of advice:

“Camp out the night before,” Calle said.

“Don’t be set on a specific carrel,” Marti said. “Have a general location and a few backups.”

“Don’t be afraid or shy to camp out!” Cabrera-Lomelí said. “It is fun and worth it.”