Farm Fun in the Sun: Students engage with local farming 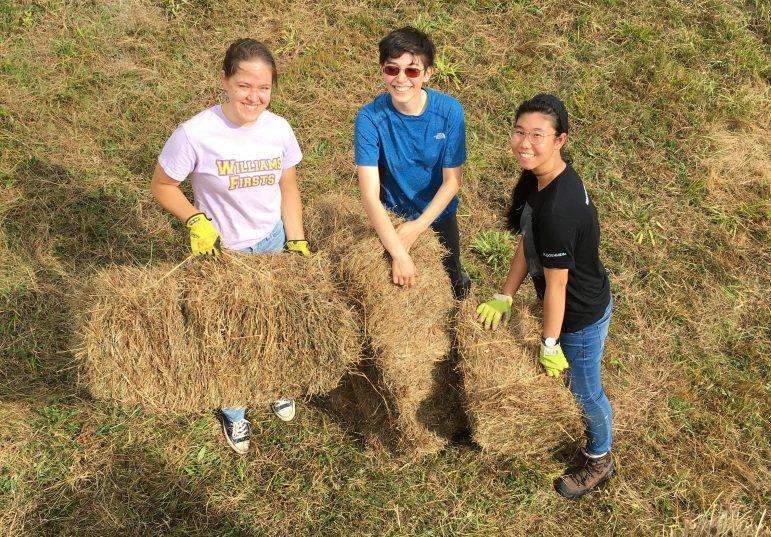 Around 200 students have volunteered at the organic-practicing Peace Valley Farm in Williamstown since the early 1990s. Photo courtesy of Marco Vallejos.

Around 200 students have volunteered at the organic-practicing Peace Valley Farm in Williamstown since the early 1990s. (Photo courtesy of Marco Vallejos.)

When Marco Vallejos ’20 walks into breakfast at Mission dining hall, he sees familiar “faces” — not a friend or a staff member, but the potatoes he recently dug up at Peace Valley Farm that are now turned into golden homefries. This is not uncommon for Vallejos and other students from the ‘Farm Fun’ physical education class he runs each fall. In fact, those in the class have grown accustomed to finding food they harvested on the farm in dining halls on campus.

This, according to Vallejos, is the most exciting part of working on a local farm. “It changes your perspective of what food really is,” he said. “It’s cool to see that the three hours you spent outside in the sun then manifest into a salad you can eat at dinner.”

Farm Fun, which Vallejos has run since 2017, brings students to Peace Valley Farm in Williamstown. The organic-practicing farm, a small operation that has been run by Bill and Susie Stinson since 1977, started welcoming students in the early 1990s. Vallejos estimates that they have had about 200 students volunteer on the farm since. Peace Valley supplies the College’s dining services with much of its fresh produce, ranging from swiss chard and kale to tomatoes and peppers. Almost all of the dining halls’ butternut squash, for example, is grown at the farm and picked by students.

As part of Farm Fun this fall, Vallejos and three other students will work on many aspects of the farm, from digging up potatoes to planting garlic. While the work can be physically demanding, Lyza Berg ’21.5, who took the class in 2017, found that it also prompted difficult realizations about the broader food system. “It challenged me in more ways than I anticipated,” they said. “It really gets students to spend more time thinking about where our food comes from, how much labor is required to bring our food to us and how much of this labor goes unnoticed, unappreciated and ignored.”

Part of what the class seeks to do, Vallejos said, is to personalize this system that often seems far-away and systemic. “To me, the most integral part is to pick the food yourself and then eat that food at least within a week,” Vallejos said. “I think it makes you consider food a lot more.”

By localizing how students think about food production, Vallejos hopes to deepen their understanding of what they eat daily and who works to provide it. “It offers this component of meeting someone who is not associated with the College by staff or by paycheck, yet who is integral to how you live at the College,” Vallejos said, referring to Stinson.

This knowledge of the local community is what Dylan Chan ’23 hoped to gain when he signed up for the course this fall. “I’d never done any farming before and I figured I might as well try it,” Chan said. “I felt like it would give me a deeper understanding of the community outside of Williams.”

The opportunity to not only learn about, but also become involved in local food production makes Farm Fun distinct from other PE options, Vallejos said. “It’s the only PE class that I know of in which you will actively do something using your body and then, from that thing that you did, be able to fuel said body.”