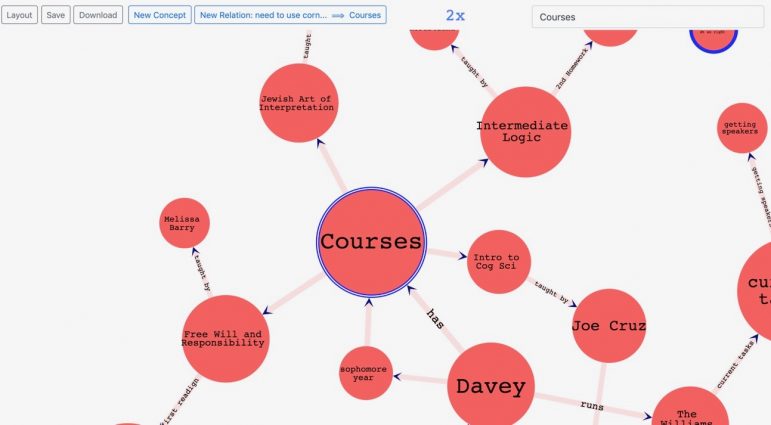 For most students at the College, note-taking isn’t a topic of particular interest. We all take notes, but few of us give much thought to the methods used to do so. The information delivered in class is of primary concern, and note-taking techniques are just tools used to store that information.

But Davey Morse ’22 thinks this seemingly minor facet of academic work is in need of an overhaul. As such, he is developing an app, called “Plexus,” that could transform the way we approach note-taking.

Morse’s fascination doesn’t just lie with note-taking within an academic context. More broadly, he is interested in the methods that we use to record and represent information. Traditional note-taking techniques, he argues, do a poor job of storing information in a manner consistent with the way that our brains work. Notes are often written in a linear fashion, in the format of a bullet-pointed list; Morse said he believes that this is not an effective emulation of the way we think.

“We think in terms of connections, but these other formats limit the number and kind of connections we can make,” he said. “I’ve  thought a lot about what kind of system would let one better record their thoughts.”

The answer, Morse said, lies in “concept mapping,” a visual technique for representing pieces of information and the connections between them.

“A concept map is a visual diagram,” he said. “You make circles and put labels inside of them for every idea that you have, and then you draw lines between them, and sometimes label those lines, to show connections. Plexus enables a kind of dynamic concept-mapping.”

The ubiquity of computers has enabled us to improve the tools that we use to organize our thoughts. But despite rapid technological advancement, Morse said, our note-taking methods have been slow to catch up.

“When you’re writing things down, the words do all of the connecting work,” he said. “Why don’t we take advantage of the page visually to show those connections, too? Bullet-points and writing fit really well onto rectangular sheets of paper because they’re just lines of words stacked on top of each other, but it’s ridiculous now that we have computers… that [we] still adhere to this traditional format.”

For Morse, Plexus has been a project long in the making. The summer before his first year at the College, he developed a prototype of the app. He has also worked with Professor of Computer Science William Lenhart, who specializes in graph-drawing and graph theory, to research existing note-taking tools and develop the algorithms underlying Plexus.

“He let me do an individual computer science research study with him where I just researched what kind of algorithms I’d need to let the computer do cool things to your concept map,” Morse said.

Morse also enlisted the help of other students, including Noah Cohen-Greenberg ’22, Isaac Wilkins ’22, Mark Bissell ’22 and Gaurnett Flowers ’22. Cohen-Greenberg, Bissell and Flowers assisted with the development of a pitch for the Venture Pitch Competition, an annual event put on by the ’68 Center for Career Exploration, in which groups of students compete to earn funding for their business ventures. The Plexus team earned second place last spring and walked away from the competition with $5,000.

Cohen-Greenberg and Wilkins have helped to develop the app’s software. “My role in the project was primarily implementing new functionality within the framework that Davey set up,” said Cohen-Greenberg. “If typing is a sport, then, yeah, I think it’d be fair to call me a student athlete.”

“The more I got to know Davey, the more I realized that this wild concept was much more tangible of a goal than I had thought,” Wilkins said. “When Davey asked me to spend July with him and Noah coding Plexus… I immediately knew that this would be a summer of love, hard work, and commitment to realizing Davey’s idea.”

This summer, the trio gathered in New York City to continue developing the app. “I brought them through everything I had coded up until then,” said Morse. “Noah coded a lot. Isaac coded, too, but focused more on the ‘theory of mind’ behind [the project].”

“The learning curve was still sharp and I was frustrated by the gap in my understanding, but I managed to make significant programming headway and make some distinct contributions to the project throughout the month,” Wilkins said.

Morse is pursuing a patent for some of the technologies behind Plexus. Meanwhile, the team has produced a functioning version of the app, but Cohen-Greenberg and Morse are still working on refining it and preparing it for release.