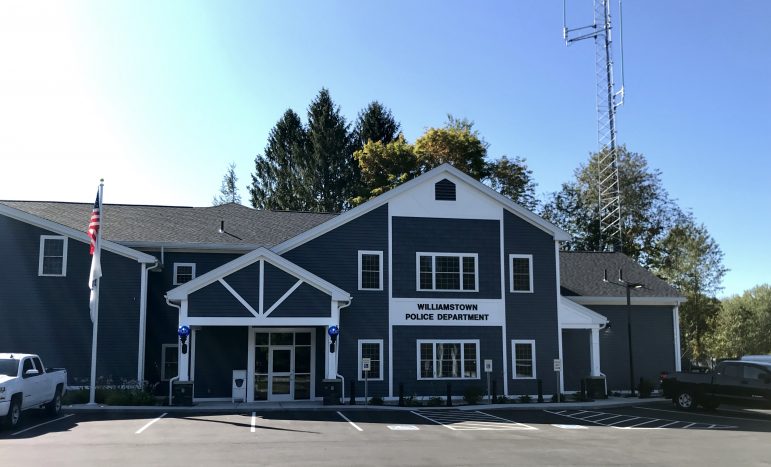 Williamstown’s new police station on Simonds Road opened for operation in July, made possible in part by a $400,000 donation and an easement of land from the College.

The College’s donation was a crucial part of allowing the town to construct the station with no net tax impact. Begun in 2017 and approved at the Williamstown town meeting in May 2018, the new station contains vast improvements from the old station, including areas for the public, crime victims, officers and those in custody to be out of sight and sound of one another. The old station also had a steep staircase leading down to the holding cells, posing a safety risk. The new station was built on the site of a former home for veterans, Turner House.

The College often plays an active role in specific public capital projects for the town, such as the police station or high school, with funding and in-kind donations. However, the College does not have a regular arrangement to provide funds to the town in lieu of property taxes save for a yearly payment to the fire district, which is a separate government entity from the town. Rather, it provides direct support to individual projects and initiatives. “This was a clear capital need for a long time,” said Assistant to the President for Community and Government Affairs Jim Kolesar ’72. “There were other projects lined up before it, such as the high school, but then it clearly became time.”

Kolesar noted that the College was not formally approached by the town, but rather is continually looking out for such opportunities to contribute. “We’re in constant conversation about this sort of thing,” he said. Indeed, the College’s involvement in the new police station continued through the planning of the project.

The most central form of the College’s support was financial. Kolesar informed Town Manager Jason Hoch ’95 on Jan. 20, 2018, following the January meeting of the College’s Board of Trustees, that the board had pledged $400,000 to support the project. Hoch replied, “That’s wonderful news. Thank you! That’s a critical piece of being able to put together a program that has no net tax impact. I should have a better sense next month of my timetable so we can coordinate an announcement for our best mutual benefit.”

Concern over the new location did delay the College’s financial support for the project, though, which it did not actually approve at the January meeting. On Jan. 22, 2018, Kolesar emailed Hoch to clarify his earlier email. “The board endorsed the idea but didn’t take a vote for a reason I can explain. At least one member wanted us to make sure this was the best possible solution for the town,” he wrote. “In other words, one closer to town that might cost more for which money could be raised. Don’t be alarmed. I think a small amount of due diligence will get us to the right place.”

At the time, the town had already approved the purchase of Turner House at a special November 2017 town meeting and purchased the deed on Feb. 5, 2018, according to deed records. The payment for the station and land also included a state grant for $250,000 in recognition of the town’s affordable housing efforts, both of which reduced the amount the town needed to borrow. “In short, we are using free cash on hand and reallocating utility cost savings (based on the electricity generation credits from the solar array at the old landfill, also facilitated by Williams), to cover annual debt costs to keep our total town debt payments flat,” Hoch said to the Record. “In 2025, we finish paying off a bond from the Elementary School, so those funds will then be reallocated to pay the Police Station debt.”

Kolesar stated to the Record that the College’s board did not have any input as to the location of the station or construction details, such as the resources that were to be provided in the new station. Nonetheless, at one point, a member of the board made an unannounced visit to the station to assess what officers thought of the potential new location at Turner House. On Feb. 6, 2018, Kolesar wrote to Hoch, “[A] Williams board member who owns a residence in town arranged last weekend to be shown around the current station and while he was there asked the officer (I don’t know who it was but I think not [Chief of Police] Kyle [Johnson]) what he thought about the move. That person’s reported to have said that mainly he’s extremely happy to finally be moving into a modern facility, that he’s wistful (probably not the word he used) about being out of the center of town but apparently didn’t think it was a huge deal.”

The other location that had been considered for the project was where Mountain One Bank is currently located on Main Street, near Currier Hall and Spencer Art Studio. This site, however, was only brought up after discussions had already started on the Turner House site. “The Town was only considering sites that were on the market or known to us to be available. The suggestion about the bank site came late in the process after we had already completed a needs assessment at the Turner House site,” Hoch said.  “The bank site had not been part of our original consideration set; however, we did reflect on the suggestion when it was made and did not find it sufficiently advantageous to suspend the planning and commitments already in place at Turner House.”

Hoch and Kolesar focused on the disadvantages of a site so central to campus and the relative lack of issues that were  posed by a less central location. Not only would buying the building harm an active local business, Hoch maintained, but would also be closer to campus than the current station. “In thinking about that site, which is a gateway to the campus on the east, it feels like an uneasy juxtaposition to have the Town’s Police nestled within the edge the campus with dorms and academic buildings adjacent without even a road crossing,” Hoch wrote to Kolesar on Feb. 5, 2018. “Our current facility has reasonable  separation at the back of a building, with Route 7 as a secondary buffer to the edge of the Greylock Quad.”

Since most calls are responded to from the field, Hoch continued, the centrality of the station should not affect response times. Alleviating the board’s concerns on this issue in part depended on Johnson’s assessment of the merits of the new location. On Feb. 6, 2018, Hoch sent an email to Johnson. “Just a heads up that I suggested that Jim Kolesar chat with you re location of new facility. He’s been tasked with gathering info to allay board member concern,” he wrote. “No issue, Jim gets it, just needs the attributable comments from you. Thanks.”

The executive committee of the board then approved the College’s involvement about a month later, on March 6, 2018, per an email from Kolesar to Hoch. Following that, the discussion between the College and the town turned to the land needed for the station. While the town and College had originally considered an arrangement in which the College would purchase Turner House and donate it to the town, ultimately the town chose to buy the property outright. The College, however, agreed to grant the town an easement for a parcel of land adjacent to the station.

The main purpose of this easement was to allow for drainage off of the town’s property, as Jim Hanifan of Caolo and Bieniek Associates, the architecture firm working on the station, stated in an email to Hoch: “The drain pipe discharges overflow runoff from the Police Station’s underground detention/infiltration basin onto Williams College land.” The College assented to the easement in principle on March 14, 2018, in an email from General Counsel Jamie Art ’93 to Hoch.

Earlier correspondence between the College and town in September 2017 had also explored  the possibility of sharing network fibers between the station and the College’s library shelving facility (LSF). After a series of exchanges, though, divergent timelines meant that the College moved ahead with its own fiber. “We haven’t even begun contemplating fiber and data options at all and I don’t want to slow your process,” Hoch wrote to the College’s chief information officer, Barron Koralesky, on Nov. 6, 2017. Eventually, the police station used its own network cable, rather than sharing with the College.

A final discussion between the town and College before construction began on the station concerned water access. The town’s public works department had recommended that the station tap into an existing water line to the College’s LSF. On July 16, 2018, Senior Project Manager Jason Moran wrote to Hoch confirming this. “No issues with you tapping into our existing water line on the access road to the LSF,” he wrote.

The new station indeed does tap into the LSF driveway’s water access line. “Our Water Department recommended the driveway connection as being a better connection and less disruptive during construction which would have required cutting across or tunneling under Simonds Road since the water main is on the opposite side of the street,” Hoch said to the Record.