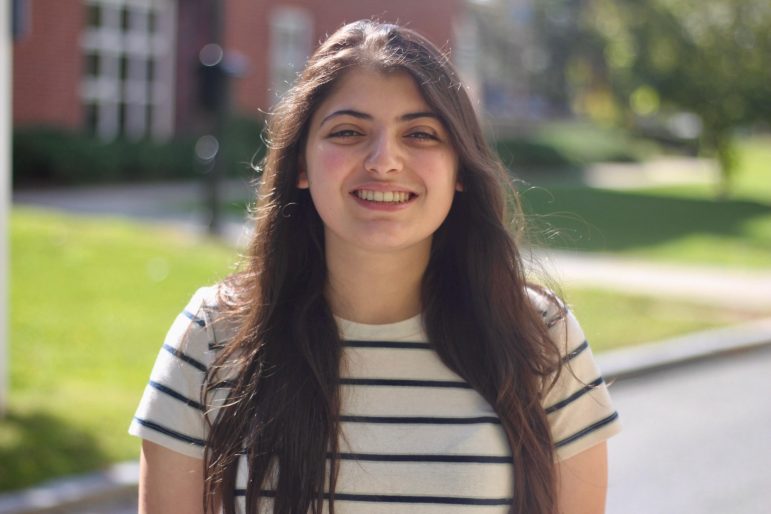 Lour Yasin ’23 is an international musician from Palestine. A guitarist, singer and composer, Lour mixes Arabic and English as well as Eastern and Western music styles.

How did you get involved with music?

I’ve been a performer ever since I was a kid. My love for music started when my father, who would travel a lot, would come back from his travels and bring a guitar every time. I started learning guitar at the age of 5 or 6. At the age of 8, I enrolled in a music conservatory and exper-imented with many styles, like classical, pop, jazz, arabesque and a little bit of Western music.

What makes your music unique? What’s your thing that you bring to the table?

I mush the two languages, English and Arabic. I make the chorus in Arabic and the verse in English, and then sometimes in a single line, I use a word that’s both the same in English and in Arabic. I also experiment with the beats, the music, the harmonies and the instrumentals. I use many different styles. When I play the guitar I use the Spanish picking style, and I’ll use chords that are mostly used in Eastern music. Everything right now is just experimental. When people listen to it, I want them to think, “This is new. This is unlike something I’ve heard before.”

Who is your intended audience? Is your music generally more in Arabic or English and which style do you feel more comfortable with?

I try to do 50/50. It’s not intended for a specific audience. I want everyone to enjoy it. People say, “Only Arabs listen to Arab pop,” or “Only Americans listen to American music,” but I think that’s just dumb, because music is very subjective and inclusive. I make music for everyone, and I want to make it all melt. I don’t want people to say “This is the part in English, and this is the part in Arabic.” I want them to listen to something new and still like it even though it’s a bit foreign. I don’t want the music to be so foreign to the point where it shuts people out. I want to let them in.

That’s very admirable. Did you have any unexpected challenges or surprises that you ran into in the creation of your music?

When I first started out I was telling people, “I want to make Arab pop and I’m gonna mix it with elements of Western music,” and some of the people at the music conservatory were like, “What? This doesn’t really work… You do realize that no one’s going to listen to what an Arab girl has to say… You can’t really attract a Western audience.” I thought to myself: it just doesn’t matter. It’s just music. There’s nothing political about it. I did have a lot of trouble with the technical aspect when I was making the music. I just didn’t know what to do, like should I use this chord or that one or write it in the Arabian musical notation that I know or in the English one. In the end, I just thought to myself — let’s just put on the lyrics, put on a song, and see what happens.

Has your music developed or changed over time?

Yeah, it definitely did change. When I first started out making music, the instrumentals were very Eastern. I thought, “This sounds like the next soundtrack to an Indiana Jones film. I need to fix this.” So it did change. Basically what I do these days is I pick three, four, five chords, and then I change the pitches of each chord on the guitar or the piano and I try to match the lyric or line to each chord, and I keep doing that until the song is complete. In terms of instrumentals, my songs are more Western than Eastern, but they’re balanced out by [Arabic]. The beat changes when I sing in Arabic. It’s like when you’re a DJ and you have a beat drop and the whole crowd goes wild. Arabic for me is the beat drop.

Are there any people who inspired you on your musical journey or any artists that you look up to?

There’s this guy who lives in the Armenian quarter in Jerusalem named Apo, and he has a band called “Apo and the Apostles.” I took a listen to their music two years ago and I thought, “They’re using Arabic and English as well.” He would speak in Armenian when he sings, and I thought, “he’s just including all the cultures he’s part of: English, Arabic and Armeni-an.” It was very different than anything I’ve ever heard from an Arab artist. Also, Mashrou Leila, which is a Lebanese band, had a really big influence on my music because they revolutionized Arab pop in a sense. They basically mixed elements of Arab pop with the alternative style. What they were doing was really incredible.

For those of us who now want to listen to your music, where can we find it?

I’ve got a Soundcloud account that goes by the name Lour Yasin. That’s basically it, but I’ll be starting a YouTube channel for music in about a month. I also have a Spinnup account but I still haven’t uploaded any original songs on it. I’ll be doing that next month.

Will you be performing live anytime soon or do you foresee yourself doing that in the future?

Oh yeah, definitely I’ll be doing that in the future. I did have a performance at the Rectory last week.

It was really fun. I was a bit nervous because that was the first time I played my songs live. I was  afraid that people were not going to like it or not understand what I was trying to do, but a lot of people loved it and a lot of people after the show came up to me and said, “This is unlike anything I’ve ever heard before and it’s really nice.” That was really great to hear.

What was your initial take on the music scene here at Williams?

I think the music scene is very vibrant to say the least, but I feel like it needs more diversity. When it comes to having student-run bands at Williams or having people regularly perform music from their own culture, it doesn’t really happen much. I really do want to see more diversity in the music scene at Williams but I do believe it will be more diverse as we go along, and I just hope to be a part of it and add a little bit of Arabian music to make it more interesting.

Final question: Do you see yourself working as a musician in the future?

Oh yeah, definitely. That’s what I want to do. I want to be one of those musicians who adds more diversity to the music industry and the music scene, and I just want to give people something new. I just want someone out there to listen to the music that I make and say, “This music gets me, even if I don’t understand what some of it is saying.” I just want to connect with someone on a very personal level. I try to write about issues that everybody deals with. I want to bring Arab pop to the scene because I think people will enjoy it. It’s really nice. It’s gonna do wonders.