One in Two Thousand: Grace Murray ’20 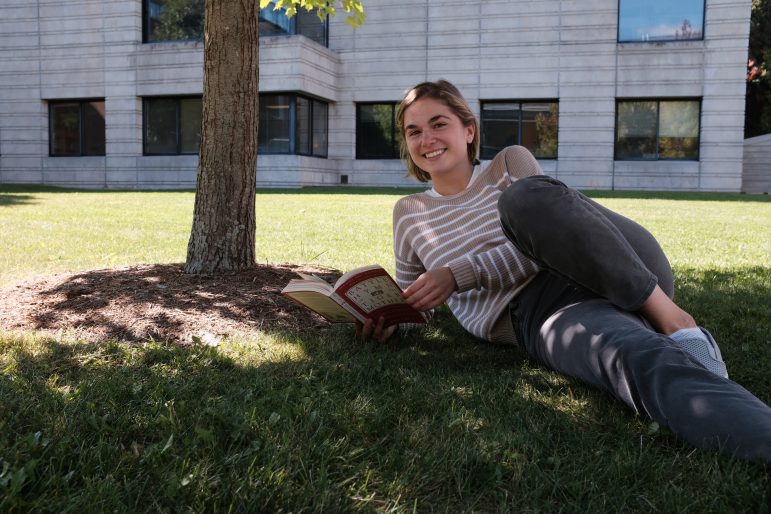 We tried to select the subject of this week’s One in Two Thousand randomly, but the first ten people we emailed did not respond to us. We decided to interview Grace Murray ’20, someone we knew would be interested and interesting, and it all worked out. But in the future, if you get an email from us, don’t miss your chance to be featured!

Two Septembers ago, I met Grace in the psychology lab of Professor Jeremy Cone. We were shy and awkward, as expected from those who know us. But, six months later, we shared a hotel room in Atlanta during a psychology conference, and the rest is history. This Monday, I sat down with my friend (and future co-author of some ground-breaking social psychology theory) to talk about her family, aspirations and work experiences.

Lately I have been thinking about childhood memories. Is there a moment that stands out to you?

I have gotten this question before, and I’ve always struggled to answer. I genuinely had a happy childhood, but for some reason the memory that comes to mind is when I was 4 or 5 years old, I had a tricycle — it was red, it had a horn on it, it was awesome. I left it in the middle of my driveway, and my mom had this huge green Suburban. She was backing out, and she accidentally ran over my tricycle. It was a tragedy! This should not be the first childhood memory that comes to mind. But the good thing about that story is that it led me to getting my very first bike with two wheels.

There’s always a silver lining! So, you come from a large family, right?

Sure. I have three brothers and one sister. So five kids is a lot of kids, but when I think about my grandma’s family or my mom’s family, it actually seems pretty small because my grandma had 12 siblings and my mom has eight siblings. My family is no longer religious today, but historically, the Murrays are a Catholic clan, and back in the day, birth control was not permitted by the Catholic Church … [Chuckles.] That’s why my grandmother has so many siblings.

Whoa! O.K. And what about your family on campus? This was a cheesy question, I know.

I have a bit of an extended family on campus. I live in Poker F with some great friends; I also have some friends living in Spencer House. But I feel most at home in the psychology department, which seems kind of silly. But I have worked for professors. I hang out in the common room and make tea — and take snacks from the cupboard.

The snacks are the best. Shoutout to [Departmental Administrative Assistant for the Psychology Department] Christine Russell! What kind of work have you done for those professors?

[Cone] did social psychology research, looking at implicit biases between groups. The other professor [Dan Norton] I worked for was particularly interested in this field called psychophysics, which is low-level perceptual responses in populations with depression.

Have you done any particularly meaningful or impactful psychology work that you are proud of?

Yeah! Last year in my junior spring semester, I took a class called “Clinical and Community Psychology.” As part of that class, you incorporate an internship or volunteer position to get some real clinical experience, like what a psychologist might do. My internship was at the elementary school with the school guidance counselor, and she’s a licensed clinical social worker. I got to sit in on some one-on-one counseling sessions as well as teaching an anti-bullying and emotional health curriculum in the classrooms. I would say that really impacted me because Greylock Elementary School is in the town over from us, but I had never had any contact with that community at all in North Adams. So that was the moment when the Purple Bubble popped for me and I realized the level of privilege that we have at this college and the education that we are pursuing. Everyone in the community around us has a unique life story and things that they are working through, and I am interested in hearing those stories and engaging with the community. One way that I hope to do that is by pursuing psychology and counseling in my future career. So that definitely guided my dream a little.

So the great thing about doing research with professors is that you often get the opportunity to travel with them to a conference to present their research. I got to do that twice. The first time, I traveled with you to Atlana, Georgia, for the SPSS conference … SPSP?

One of them is the stats thing…

I know — [Pause.] Wait! The SPSP, Society for Personality and Social Psychology, conference! Yes, it was super fun to engage with the research and be in Atlanta. Then a year later, we took our research to the International Convention of Psychological Science, which happened to be held in Paris, France! So, I managed to convince the psych department to fund my trip to Paris, which was amazing.

Sneaky! You’ve also managed to escape the Purple Bubble on a more local level. Any recommendations?

One of the highlights of the Berkshires is this little town called Lenox. It’s nearby — maybe a 30-minute drive away. There’s lots of great shopping, particularly this store called FatFace. I have bought quite a few items of clothing from there. They speak to my style, I would say. I also love going to the Blue Benn and the quarry in Vermont.

Those are great ideas! So you’ve got this big family, you’ve done this great psychological work and you’ve had these abroad experiences. It seems like you’ve got it all. But is there something you don’t have that you really want?

Well, there is one thing. I have been cursed my whole life with better than perfect vision, and I’m just jealous of all these people with the amazing accessory of eyeglasses. I have always wanted some of my own.

Why don’t you get fake prescription glasses?

That’s dumb. But recently I bought some blue-light glasses, which makes me feel pretty intellectual. So there’s hope!

We’re rooting for you.