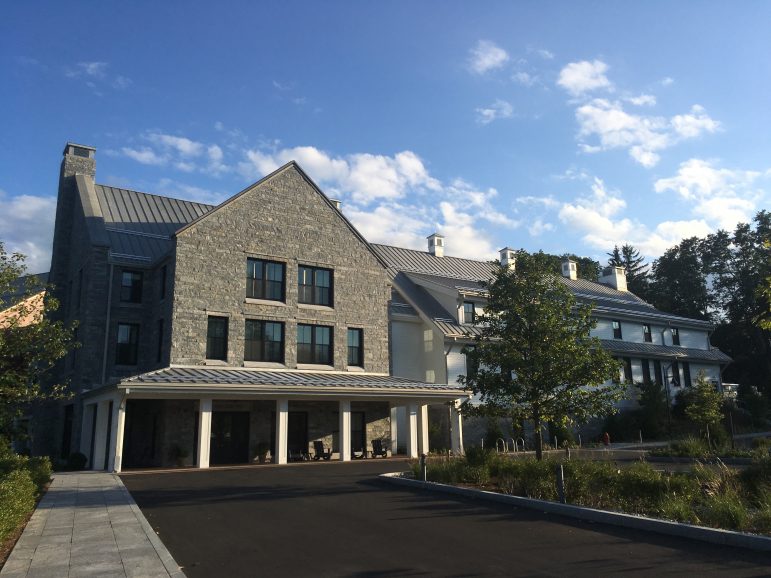 The exterior of the new Williams Inn from the driveway off of Spring Street. The inn has been open since August. Photo courtesy of Joey Fox

With the opening of the new Williams Inn at the base of Spring Street on Aug. 15, the College completed a three-year, $35.6 million project in the making. The College owns the inn and was heavily involved in its construction, but has leased the inn’s daily management to the Waterford Hotel Group, a New England-based hospitality management company. The new inn is significantly smaller, with 64 rooms to the previous inn’s 114, but has a larger staff and improved energy efficiency technologies. The inn also contains The Barn, a restaurant which advertises “familiar New England classics.”

“The new inn is more modern, with amenities not found in the old inn, while maintaining a real New England farmhouse feel,” said Rita Coppola-Wallace, executive director of design and construction at the College. Coppola-Wallace also emphasized the important role of outdoor spaces in building a sense of community around the inn. In particular, a large lawn outside the inn will hold numerous community events, including outdoor movies starting next summer.

For many, the change in the inn’s location — from Main Street to Spring Street — is its most distinguishing feature. “From my perspective, the location is really the most important difference,” said Matt Sheehy, who is associate vice president of finance and administration and also serves as a liaison between the College and the Waterford Hotel Group. “From what I have personally experienced, it has been a place where casual meetings, business meals, and larger events have occurred in greater number than the old property and many more activities are planned now that the academic year has kicked off,” he said. “I believe this is because of the location at the base of Spring Street, the overall design and its natural place in the landscape.”

Jim Kolesar ’72, assistant to the president for public affairs, also emphasized that the new inn sits on a previously underutilized space. “What was there before, storage barns, did nothing for the community,” he said.

The College only publicly announced its plans to build the new inn in 2016, but began considering the possibility in 2013, after the old inn’s declining profitability led the College to purchase its debt. The previous inn, which has sat on Main Street at the western end of campus since the 1970s, was considered too large to be financially stable, partially explaining the decreased number of rooms in the new inn.

Construction of the new inn wrapped up in August, a few months behind previous estimates of a late spring or early summer opening. According to Senior Project Manager Michael Wood, this delay allowed for the addition of College-themed artwork and decoration in the last weeks before opening. The construction team also focused on improved energy efficiency measures for the inn. “This includes the use of low flow fixtures, LED fixtures with advanced controls and daylight harvesting and any integrated building management system that interconnects with the reservation system to control room conditioning based on room occupancy,” Wood said. In sum, these changes will result in a 45 to 50 percent reduction in energy consumption per square foot from the old inn to the new inn.

Though the inn only opened four weeks ago, College administrators are already optimistic about its effect on campus life. “Many community members have said to me how great the inn looks both outside and inside,” Kolesar added. “It’s clear that the new restaurant has been very full, while the one at the former site had become quite empty. And it sounds, from stories I’ve heard, that the restaurant is having to work through perhaps a predictable number, for a new operation, of service wrinkles.”

“I believe it is a bit too early to determine its true impact on the student body and town culture,” Sheehy said. “Anecdotally, I was excited to stop into the inn on Aug. 30 and see students, faculty, staff, and towns people enjoying the various spaces surrounding the restaurant, The Barn, and the property.”