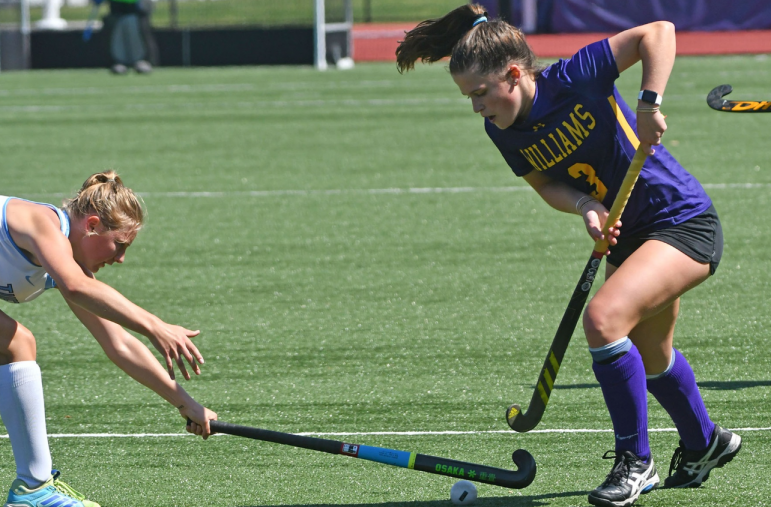 As the excitement of move-in and First Days begins to settle, fall season athletics are heating up, with teams taking on their first competitions of the season.

Men’s soccer (0–1–1, 0–1–0 in the NESCAC) started off its season with a 1-1 tie against Springfield last Wednesday and a narrow 3-2 conference loss against Tufts on Saturday. The men will play their next game at RPI today and their next conference game at Wesleyan on Saturday.

Football has yet to play this fall, but will get its first shot at a win in a conference game against Middlebury on Saturday. The men will take on several NESCAC rivals in September.

Volleyball  (3–1) started strong at the Hawk Invitational last weekend, winning three straight matches. In their season-opening game against Kean last Friday, the women secured  a 3-0 set victory. Later in the day, the team played a close game against SUNY Oneonta that went to a full five sets, pushing through to clinch the victory in the final set with a score of 15-11. The next day, the women defeated Mount St. Mary in straight sets, before falling to SUNY New Paltz 3-1 in their last game of the weekend.

With nine returning players and seven incoming players for the fall season, volleyball has a solid core of experienced players, along with a refreshing and exciting group of first years.

“We are really excited about the possibilities of this group,” head coach Christi Kelsey said. “It’s cool for us coaches to think about the depth and talent we have on our entire roster and have fun trying to figure out all the pieces and combinations that might work best together.”

While those first two games have been out of conference, the contests helped pinpoint areas to work on before the team’s first conference game on Sept. 20, when it takes on Trinity. “All of our matches will really provide us with an opportunity to measure where we are at currently and what we can do to keep growing and improving each day,” Kelsey said.

Men’s and women’s cross country started their season at the Monmouth Invitational last Saturday. The teams’ main goals this fall are the three season-ending championships, along with the Little Three next week, the inter-regional meet at Connecticut College in October and the USATF meet in November.

Another much-anticipated event of the cross country season is the NESCAC Championships, which will also be held in Williamstown. Both teams are eyeing first place this year, after finishing second last season.

Head coach Pete Farwell ’73 credits the team’s senior runners with much of the team’s energy. “[They] have been motivating the squads to build their training over the summer… everyone on the roster has ‘bought in’ to being the best teammate and runner they can be,” he said.

The women’s team is captained by Hannah Lebowitz ’20 and last year’s All-NESCAC first team honoree Emma Herrmann ’20, who have been working to bring first-year runners “into the fold.” The men’s team also has the “most returning ‘starters’ ever,” and looks forward to a strong showing this fall, especially at the Purple Valley Classic on September 28. Hosted by the College, the meet will bring together 20 teams from all over New England and New York.

After finishing runner-up at the NCAA National Championship last spring, women’s golf is excited to not only continue to improve and grow as a team, but also to welcome two new players.

The women will kick off their fall season at the Ann Batchelder Golf Invitational on Sept. 14. “We are looking forward to building on to what we have created in the past years,” head coach Tomas Adalsteinsson, who was named the National Women’s NCAA Div. III Golf Coach of the Year last spring, said. “The next six weekends [of competition] will give us an opportunity to test our skills, and compete with the top teams in the Northeast.”

The women will compete at Taconic in October at the Williams Fall Invitational, which is also the NESCAC Championship Qualifier. The team seeks to obtain their fifth consecutive NESCAC title.

Men’s golf co-captain Sam Goldenring ’20 concluded the team’s season last spring with a third place finish at the NCAA Div. III Championship, after earning the Little Threes title with Amherst and playing in the NESCAC Championship.

“It is a fantastic group of young men and they like to work hard and make each other better,” head coach Josh Hillman said. “Personally, I am really looking forward to watching them grow.”

“The fall season provides a great opportunity to make significant strides on the water, improving our boat feel, efficiency, trying different combinations and simply taking as many strokes as possible,” head coach of the men’s team Marc Mandel said. His main goal is for team members to “create a solid foundation of mechanics and fitness to lead them into the winter offseason with the fundamentals that will serve them well while they train on their own.”

With brand new team members to get to know and old team dynamics to revisit after summer break, women’s head coach Kate Wachala said that the fall is all about, “a focus on training, boat skills and team dynamics… [it] is a time to assess our starting point and work to get better every day, every practice and every stroke.”