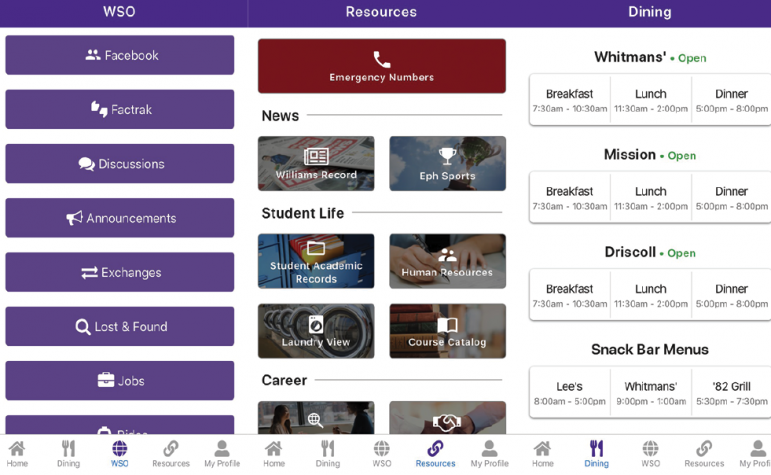 The academic year has only just started, and it seems as if there are a million things to keep track of: deadlines, drop/add period, campus events, whether your laundry is done and what the alternatives are to Taco Tuesday.

Lucky for you, two computer science majors, Dysron Marshall ’20 and Kelvin Tejeda ’20 have created the Williams Mobile app, which should make being a student at Williams just a little bit easier. The app — available on both the Apple Store and the Google Play Store — combines such frequently used resources as Daily Messages, Williams students online (WSO) and dining hall menus.

The main purpose of this app is to engage the student body directly with what is going on around campus. “That’s why the calendar is front and center, so that you know what is going on,” Tejeda said. “Design has to have a purpose.”

During his first year, Marshall enrolled in a Winter Study course in which he learned basic coding and created the first version of the app. Unfortunately, that project remained dormant for year, and while it was eventually published on the Google Play store, there were quite a few bugs, and user engagement was low. Later on, Tejeda worked on a new design layout, which would be incorporated into the current version of the app.

This summer, Marshall, working in San Francisco, and Tejeda, working in Boston, decided to finally turn the project into a fully functioning app. Because of the often-frustrating nature of coding, they relied on each other for motivation. “What tends to happen in a situation like this is that you get into a dry spell for weeks, and then you never revisit the app,” Tejeda said.

Apart from requesting the office for information technology and the office of communications for information about on-campus events and dining halls, Marshall and Tejeda built everything from scratch, coding in JavaScript and using the framework React Native.

The app boasts clear fonts, clean lines and a user-friendly layout. “I am interested in design that is useful, [as] clean as possible and accessible to people with low vision,” Tejeda said. “The first design was awful, but that is the process: You implement your first design and you keep working on it till it works for everyone involved.”

Deeply interested in product management and design, Marshall and Tejeda listened to what students said they wanted to see in the app. Being students themselves also helped them create a design tailored to the student experience. “People didn’t know what there was for meals, so [we asked ourselves], ‘What would we do to solve this?’” Tejeda said.

The most rewarding part of this project for the pair was when Williams Mobile launched on both Apple Store and the Google Play. “We woke up the next day and saw 500 people were using it. Seeing numbers rising and positive feedback was super cool,” Marshall said.

Both seniors said they hoped that other students would want to contribute to the app so that it reflects the needs of future generations of students. “We are not keyholders for this app — anyone can come up with ideas,” Tejada said. “We have spoken with the office of communications, and we were hoping we could set up [an] agreement [in which] they would pay students to work on the app, ensuring constant development of the app and a mentorship program for students.”

Going forward, Marshall and Tejeda would like to change the current WSO into a more social feature on the mobile app, allowing students to post discussion threads or comments. Tejeda and Marshall are also interested in adding a tracking feature to the app so that they can understand what users benefit most from and then improve those areas.

Students interested in learning about Williams Mobile and the website can join WSO or participate in a winter study independent project Marshall and Tejeda may organize on coding and adding new features to the app.