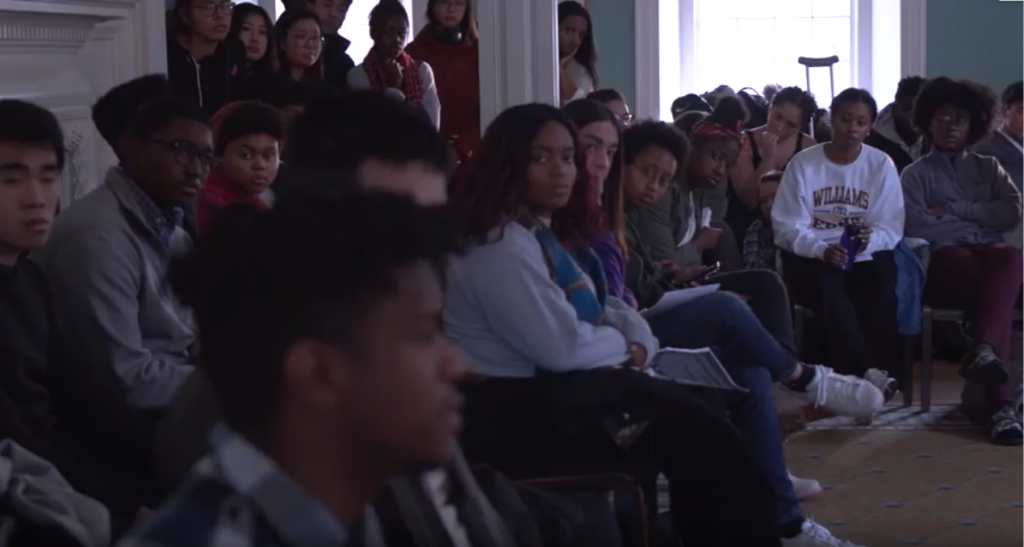 On Sunday, the Williams College Black Student Union (BSU) organized a town hall in Griffin Hall on affinity housing and Davis Center renovations. As the event flyer read, the gathering was to be “a space for students, particularly Black students, to reflect on recent events and the general student experience here,” granting students the opportunity “to voice concerns and work towards solutions.” The meeting was attended by students of varying racial, economic and sexual identities, as well as by a few members of the staff and faculty, including President Maud Mandel. Topics of discussion included affinity housing and the upcoming housing lottery, the existence or nonexistence of Black spaces on campus, the difficulties of the entry system for people of color (POC), experiences with Campus Safety and Security (CSS) and the potential for the College to adopt “The Chicago Statement on Free Speech.”

The Town Hall began with personal anecdotes from current Black first-years, who discussed their feelings of tokenization within entries and the lack of POC Junior Advisors (JAs), particularly Black JAs to whom they felt comfortable turning to. There was discussion of the burden Black first-years, and Black students in general, feel to “educate” their non-Black peers at a time when they themselves are trying to learn, dissect and understand their own experiences.

Current and past Black JAs also spoke on their varying experiences. Alia Richardson ’19, co-chair of BSU and a JA to the class of 2021, described her own first-year experience as a positive one, stating that she “had a really good experience [and] made a lot of close friends,” and that she spent her time as a JA trying to recreate that positive entry experience for her own first-years. Jazmin Bramble ‘20, current JA to the class of 2022, described her first-year experience as “[neither] positive nor negative.” Bramble discussed how, early on in her first year, one of her JAs, a POC, explained to her that “the [entry] system itself wasn’t going to benefit [her],” so her goal was to simply create a comfortable space within the entry.

Discussion of the entry experience interweaved with ideas about what affinity housing could potentially look like at the College. Rocky Douglas ’19, co-chair of BSU, explained how as a first-year she experienced constant microaggressions and felt obligated to educate her peers, ultimately leading to intense feelings of isolation. “Thank God I found Rice House [a Davis Center house autonomously managed by BSU]” Douglas said, describing Rice House as “this space I could go to and connect with upperclassmen, feel safe and not deal with microaggressions or feelings of alienation. I was in a space that was made with me in mind.” This idea of a space created by and for students of color was described as a central feature of potential affinity housing.

Some attendees likened affinity housing to current housing for student-athletes. “Right now, we have a lot of houses on Hoxsey Street or off-campus houses that unofficially serve as affinity spaces for student athletes … whereas there are no other spaces that can be claimed by students of other identities in that same way,” Richardson said.

Students also questioned the potential effects of the absence of affinity housing and POC spaces on application and enrollment rates of students of particular identities.  Liz Creighton, dean of admission and financial aid, provided data to that end.

“Forty-five percent of students admitted to Williams end up enrolling,” she explained. “You’re right that we yield athletes at a higher rate, [meaning] they enroll at a higher rate than non-athletes, [but] beyond that, across the range of other identities on campus, the yield is actually quite similar.” Students brought up that forming communities in college is considered by many high school students when deciding which school to attend.

One student pointed out that heterosexual white men are actually a minority on this campus. The student explained that when one takes race, economic class and sexual and gender identities into account, minority groups make up a large percentage of the student body. Official College statistics on class data state that around 40 percent of the school identifies as POC. However, this statistic does not take into account other minority groups such as first-generation, low-income or LGBTQ+ students.

The relationship between some students of color and CSS was also a topic of discussion. Isaiah Blake ’21 described the POC community as a “magnet” for CSS, a sentiment echoed by other attendees.

Douglas provided context to the group, explaining how “recently there have been multiple run-ins between Black students, Black spaces and CSS or people who are supposed to be policing the space in some way…” Several students expressed how they feel unsafe around CSS of-ficers. Some examples of alarming behavior that attendees gave included POC-organized parties, where room capacity was arbitrarily and significantly lowered on more than one occasion, as well as examples of condescending and rude tones some CSS officers have taken with POC.

Also highlighted was the discrepancy between policing of majority POC and non-POC parties. Alexa Walkovitz ‘21, shared her experience of living in Wood house, which has a large student athlete population. “[My roommate and I] walk in a lot of times and their parties are going on in multiple spaces in Wood and I don’t think I’ve once seen a CSS officer shut them down, and they destroy the space,” Walkovitz said. To her, this is a direct contrast to the experiences of many students of color with parties and CSS.

One of the final topics addressed was the College’s potential adoption of “The Chicago Statement On Free Speech,” also known as the “Chicago principles.” President Maud Mandel spoke about a petition that has been circulating amongst faculty requesting that Williams sign the Chicago Principles. Though she encouraged students to look up the Chicago principles themselves to get a better understanding of what they are, Mandel described them as “a kind of high-level set of principles encouraging the university to have a stance towards speakers; [that is,] anybody should be allowed to be invited to the campus that anyone in the campus community wants to have come.” According to Forbes, since February 2018, at least 35 universities have adopted the Chicago principles.

This brought up questions among attendees about the role of Uncomfortable Learning, a group that frequently brings controversial speakers on campus. Much of the discussion was centered around students’ qualms with the lack of academic value of many of these speakers. Some worried about the effects of people spouting hateful or even false rhetoric and refusing to engage with students or faculty in non-combative ways, in contrast to the legitimacy that an appearance at the College might lend these views.

This meeting was recorded and is available for viewing on the “Williams BlackStudents” youtube channel.