One in Two Thousand: Delsa Lopez ’21 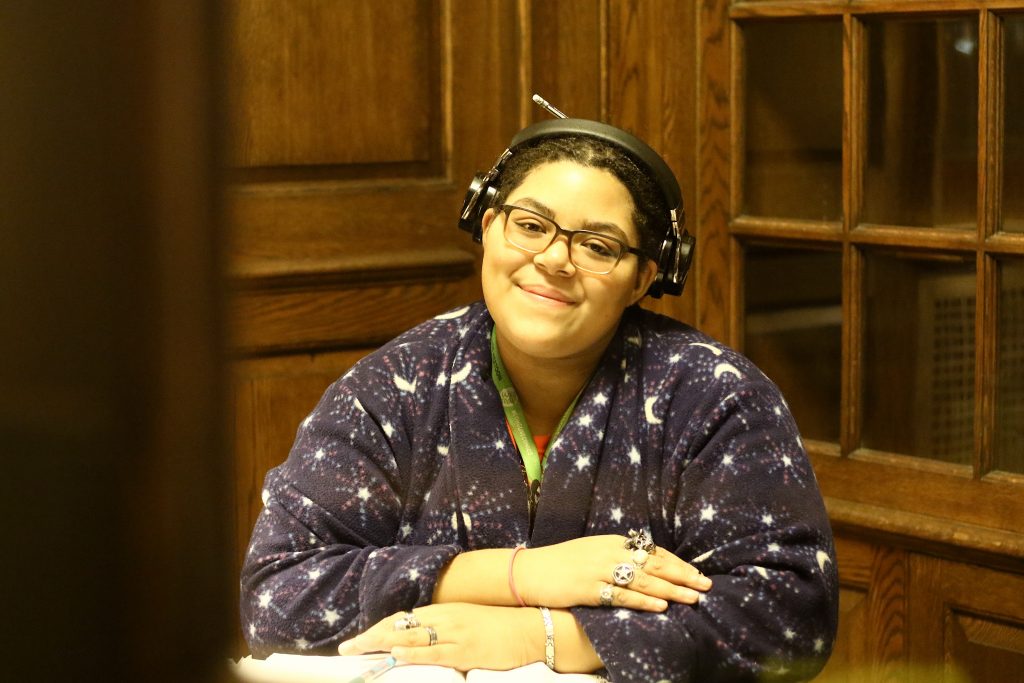 I first met Delsa through Exploring the Arts during First Days. Everything about her – from her bold lipstick to her buoyant energy – had me thinking, “This is someone I want to get to know.” I sat down with her to talk about all things spooky, ranging from makeup to taxidermy.

Delsa! We have to start with your Halloween makeup. You were just serving up looks left and right. How did this tradition get started?

Ninety percent of my personality is Halloween and spooky stuff. I feel like I lack ambition unless it comes to the aesthetic. My dad is the spooky one who got me into goth [stuff] and reading classic literature like Edgar Allan Poe, who’s bae. He used to do my makeup as a witch or clown every year until I was eight years old. Then I was like, “I’m bored, and I can do better than you.” [Laughs.] By the time I was in middle school I had too many ideas … so I decided that starting October 1st, I would just do a different look every day. It started with really small stuff, like drawing a heart on my cheek and being “just cute,” and by the 30th or 31st, it would be like a full-on witch look, with skin peeling off [like] the Wicked Witch of the West getting hit with water in The Wizard of Oz.

Is this how you got interested in cosmetic makeup?

Once, my dad was like, “Oh, wait, you’re actually pretty good,” and I was like, “Maybe I should do beauty makeup,” because that is the birth child of SFX [special effect makeup] in my opinion. I would just mix colors and be like, “What why does this look so orange?” So I just kind of learned on my own. I grabbed a couple books, and I learned on YouTube… When I showed interest in makeup, my mom was like, “I’ll teach you everything.” But everything she taught me was dated [laughs]. Because it was very ’90s, like line your lips very dark, and that just ain’t facts anymore, bro.

Do you have looks that you’re especially proud of?

In ninth grade, I was Twisty, the clown from “American Horror Story.” He has this giant mask that makes him look like he’s always smiling, so I built teeth on top of my lips so it looked like my face was always open. I skipped all of my classes just to finish my makeup in time for a costume contest. So, I’m doing this. I have a blow dryer. Everything is happening. I finish at 3 p.m., and I think it looks like shit, but I literally come out the door, and one teacher is like, “WTF?” and I was like, “Aye, okay, so apparently this is good.” I go into the theater, everyone turns around and is like, “What?” and I’m like, “What’s up, my dudes? … Spooky spooks.” The best part of that day was when I went home because I had to take the train home, so all these random public people just kept looking at me on the train. It was really fun.

That’s actually amazing. On the topic of spooky things, don’t you want to be a coroner?

Medical examiner. But close enough. Because I’m a spooky boy, it only makes sense. A coroner is just a person that investigates a dead body after it’s been found, and they basically just say, “Yeah, that [body’s] dead.” A medical examiner actually performs autopsies and chemical tests to see what are the residues left in this person’s body to investigate how they died. It came from me just loving the idea of death, honestly. I’m a very goth child. I take comfort in the abyss that is the unknown of death. I really like it because I’ve never been afraid of things I don’t know… Branching off of that, I just want to do something to Sherlock things out. I want to investigate and puzzle things out. Medical examiner made the most sense because it involves forensics, which I love. And I like feeling like I’m doing something because I’m helping the police, and even though I don’t trust the police, I like giving answers, and I like feeling needed.

Respect. Can you tell me a bit about where you grew up?

I was raised in Washington Heights, N.Y., which is where Lin-Manuel Miranda and Jennifer Lopez are from. It’s a really poor neighborhood with Broadway splitting Dominicans and Mexicans and Hasidic Jews. So anytime I walked my dog past Broadway, all these white people would just look at me and I’d be like, “Excuse me, I deserve to be here.” [Laughs.] I jumped through different public schools until I got to high school, and then I got into this really good private school because of a scholarship program I went through called Prep for Prep. This school was predominantly white, so I learned to navigate white spaces. A lot of celebrities rolled through because their sons and daughters went [there]. I don’t get starstruck, so like, Hugh Jackman had come over and [so did] Carmelo Anthony, this basketball player – I don’t know sports. I met Matt Damon because his stepdaughter was in our grade and she had a sweet 16. My parents would freak out whenever they pick me up from someone else’s house and be like, “Is that Stanley Tucci?” and I’d be like, “I don’t know, I guess it is?” There were a lot of bar and bat mitzvahs and one friend of mine, her mom was the head of Atlantic Records, so at her bat mitzvah were Flo Rida and Bruno Mars. And I was like 12, mind you, so I was like Flo Rida? [Laughs.]

Yeah, this was in like 10th grade. My school was a progressive white school in Upper West Side called the Calhoun School. [Part of] AP Biology was going to the forest and investigating vertebrate anatomy and finding dead things. One of the things they do is that they’ll find a roadkill of a deer, that you can see all of the bits and stuff. So our bio teacher found a deer. Then I was like, “Wait, I want this… I want to keep this as a memory.” We call teachers by their first names at this school, so I’m like, “Hey Francesco, can I grab this deer?” And he’s like, “Yeah, sure, when we’re done with it.” He didn’t say nothing about my request because he’s low-key crazy, which is why I loved him. So I grab this giant black garbage bag and I’m like, “Lit.” I named the deer Barney Vincent, because, like, venison. When we went back [to school], we went on this yellow school bus and I just held this bag with Barney Vincent in my lap the entire time. [Laughs.] Because I’m weird, my parents also did not ask any questions. They’re like, “Alright. She’ll show us eventually.” What I did is I put Barney Vincent into this giant vat of alcohol, so you can kill every bacterium that was ever in this deer’s body. I did that for like two weeks. Then after you desiccate, you soften the fur. So I did that for like another month. Then I capped the limbs off with hot glue and leather so that it’s tight and nothing can get in there. I made this deer, and then I showed it to my parents, and they were like, “WTF, wait, you didn’t do his eyes right.” [Beat.] I was like, “You right,” so I got some glass eyes and fixed it.

I’m floored, but moving on. Can we talk about your reading habits?

I read super avidly. Throughout high school, I would read two to three books a day. Now I’m sad if I don’t read one a day. I need constant stimulus; as an extrovert, this is how I survive. Now that I’m busy, I read like tiny books, but I’ll make sure to read at least one a day. My record in one month was 400 books. I’m just a very fast reader. Like, in Writing Workshop, I have to use that skill when I’m reading a seven-page paper in an hour and have to be able to talk to someone about it, which means I have to internalize what happened in it.

Is there anything else you’d add before we wrap up?

Let’s get introspective. I’m a very introspective person. I really like self-reflecting all the time, which is also why I like making people uncomfortable, because it forces them to cope with it, and I like observing how people cope with things. Just to be like, “Oh, how are they going to deal with this?” I think that’s the most fun part of a person that I can investigate. When I do that to myself, I’m just more like, “Hoo, I can tell this is a thought I do not want to probe. So let’s probe it.” So for me, I don’t think I’m an ambitious person, which might seem odd. I just feel like I know what I want to do, but I also know that I could be easily swayed in any direction and that scares me. I really love makeup, I really love science and I just think that I try to be open-minded with any opportunity that comes my way.