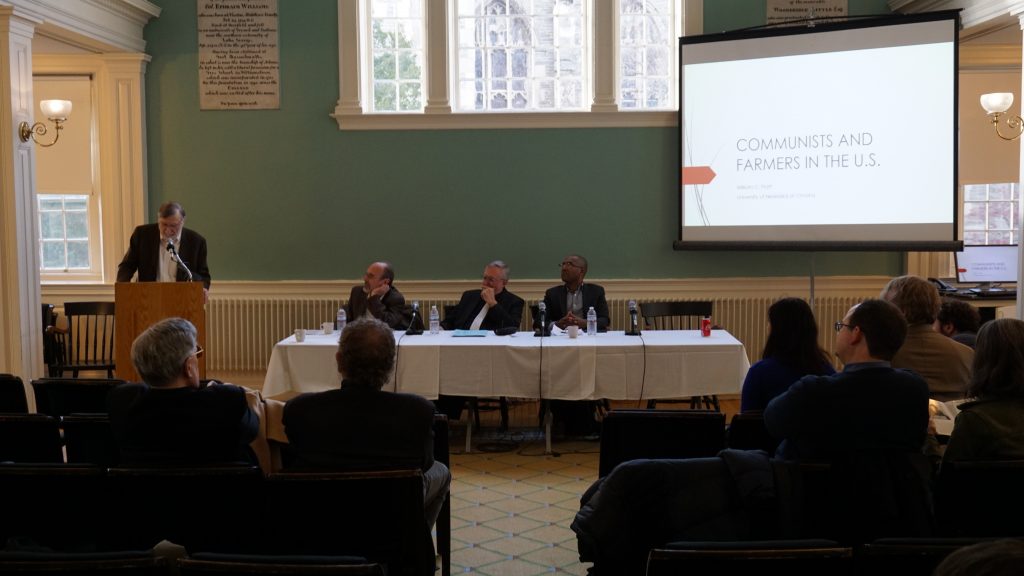 The Stanley Kaplan Program held a conference at the College for the centennial anniversary of the CPUSA. Photo courtesy of Glenn Gebhard.

The Stanley Kaplan Program held a conference at the College for the centennial anniversary of the CPUSA. Photo courtesy of Glenn Gebhard.

As a student-organized event, “Peace Party,” celebrated the 100th anniversary of the Armistice of  November 11, 1918,  a completely different centennial event was also celebrated at the College this weekend: the anniversary of the establishment of the Communist Party of the United States of America (CPUSA), an important political development of the last century. A conference sponsored by the Stanley Kaplan Program in American Foreign Policy, as well as the political science department, provided the setting for a gathering of several dozen scholars of the history of the CPUSA.

Chair of the political science department James McAllister said it was important to host the conference. “The rise and fall of the communist party is of central importance to the history of the American left in the 20th century,” he said.  “I don’t think you could have asked for a better and more diverse group of scholars. Maurice Isserman, Harvey Klehr and John Earl Haynes are towering figures … on the subject, along with … younger scholars, such as Randi Storch and Erik McDuffie.”

Additionally, Ryan characterized the event as “a reinvigoration of the historians in the field,” adding that his hope for the conference was to “bring together everyone significant on the topic.”

Meanwhile, Sibley emphasized the event’s focus on historical figures who oversaw the rise and fall of the CPUSA. “It’s a celebration of the 100 years, but it’s also an investigation into the history of the people behind the party,” she said. “They were a really fascinating group, and many of them put forward ideas that were incredibly progressive for the time.”

One such highlight was presented by John Sbardellati, associate professor of history at the University of Waterloo in Ontario, whose talk focused on the role of communists in Hollywood as well as J. Edgar Hoover and Ayn Rand’s views on both communism and the film industry. His paper, entitled “Ayn Rand and J. Edgar Hoover Go to the Movies: Contested Visions of Anti-Communism in Hollywood’s Early Cold War Films,” explored Rand’s largely failed attempts to find work as a screenwriter in Hollywood (which she blamed on her outspoken anti-communism) before the impact of her novel-turned-film The Fountainhead. Meanwhile, Sbardellati argued that Hoover was driven by a spiritual battle between “the American Christians” and “the atheistic, ‘godless’ communists.” Hoover, he explained, was intensely involved with the film industry during the 1940s and ’50s, convinced that Hollywood was attempting to subvert the “American way.” He pressured producers to put out allegorical pieces, such as Invasion of the Body Snatchers, which highlighted the purported evils of communism.

Panelists at the event took varying approaches to investigating the party’s history. The first session explored the evolution of the party line and the ideas of party leaders as they promoted revolutionary change in America. The second focused on Red Scares in the United States and the McCarthy era, as well as the Rosenberg case. The third looked at the party’s involvement with progressive movements for social justice, including racial equality, women’s rights, labor activism and peace activism. The fourth explored the party’s involvement with espionage and propaganda campaigns in order to spread its messaging in the United States. The panel also considered the impact of those activities on Soviet-U.S. relations. Finally, the fifth session looked at how the Communist Party affected the lives of Americans, from its message to the working class, to its scrutiny by the U.S. government, to any related consequences of the party’s activism.

Ryan confessed that “technically, the party was born in 1919, marking the split in the Socialist Party of America. But we got such a good offer this year, we decided to hold the event a year in advance!”

On time or not, the conference provided a deep exploration in various aspects of CPUSA history, and fulfilled Ryan’s goal of “reinvigorating” the study of the subject.

“I think it’s a wonderful conference,” said Gail Williams O’Brien, professor emerita of history at North Carolina State. “The field deserves more events like this one.”