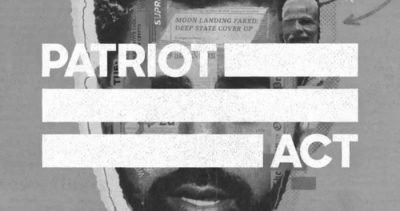 “Look, I’m not gonna get my humanity from Bill f*cking Clinton,” Hasan Minhaj said. “He’s just not gonna understand where I’m coming from, my point of view, the things my community has had to go through – we have to claim that shit on our terms.” Minhaj recalled this specific moment at the 2016 Democratic National Convention as being that which inspired the creation of his new weekly Netflix comedy series, Patriot Act. Right before Hillary Clinton officially accepted the presidential nomination, Bill Clinton gave a speech in which he addressed different minority voters across the country, and Minhaj was left in shock as Clinton seemed to call on Muslim Americans to lead the “war on terror.” “I remember standing there like ‘Bill, I hate to tell you this: I don’t know any terrorists.’ He thought our only value was to help find terrorists,” Minhaj said in an episode.

The title itself, Patriot Act, is a move to reclaim the 2001 legislative act entitled “Uniting and Strengthening America by Providing Appropriate Tools Required to Intercept and Obstruct Terrorism,” which allowed for greater federal surveillance and marked a painful new era for Muslim Americans after the 9/11 attacks. It is also a play on words, as the show is meant to repudiate the false belief that Americans from different ethnic backgrounds shouldn’t criticize the United States if they want to be seen as patriotic. “I’m gonna show my perspective on what it means to be an American,” Minhaj declared.

Most late-night television is known for having the unique ability to inform its audience while providing comfort. From 1954’s The Tonight Show with Steve Allen to today’s The Daily Show with Trevor Noah, comedic hosts have for years provided the American public with entertainment along with a final word on the day’s newsworthy events. Through comedy, these shows have created engaging ways for everyday Americans to become involved in discussions around politics.

Especially in today’s climate, comedy has served as a coping mechanism for many Americans who are constantly drowning in distressing news alerts. Rather than wallowing in the seriousness of the current problems, jokes about the president or others in power can help people remain hopeful. As evident in movements such as Black Lives Matter, the only outlet for Americans of marginalized identities to express political dissatisfaction is oftentimes through harrowing, emotionally exhausting measures. This may also stem from a fear that these issues will not be taken seriously by the larger American public if viewed from only through a comedic lens.

The vast majority of weekly comedy television is still hosted almost exclusively by older, white, male comedians despite this not being reflective of the country’s demographics. Networks have isolated people of color from participating in the national political conversation in comedic spaces, instead choosing to cater to a version of America that no longer exists.

Marginalized Americans have not been afforded the luxury of comfort through comedy, and have been forced to be acutely aware of their own social standing at all times. With Patriot Act, Minhaj has become one of the few people of color, and the first Indian-American, to host a show of its kind. Minhaj was given his big break by Jon Stewart as a correspondent on The Daily Show, and was the featured comedian at the first White House Correspondents’ Association dinner during the Trump administration. So when the announcement came that Minhaj would be leaving The Daily Show to work on his own program, fans began to look forward to a comedy show that would be deeply political at its core.

Patriot Act has powerfully delivered on this expectation, as it premiered with two episodes that delve into the current legal battle against affirmative action, and the United States’ harmful economic relationship with Saudi Arabia. Until now, Last Week Tonight with John Oliver was the only show giving weekly nuanced takes on problems that are largely overshadowed by the daily boisterous distractions that the White House constantly throws into the news cycle. This has allowed Last Week Tonight to cover events from the recent Brazilian election to corporate taxes and felony disenfranchisement, problems that are likely to remain long after Trump is gone and deserve as much attention.

By following this form of detailed reporting seen in Last Week Tonight, and because Patriot Act is informed by his life experiences as a Muslim- and Indian-American, Minhaj has poised himself to become one of the most important new voices in American politics going forward, revolutionizing the way in which people of color engage in the national political conversation.

Marginalized Americans have long understood that the irony we find in racist episodes or microaggressions could only be laughed about in whispers amongst ourselves in fear that the rest of America would dismiss the gravity of our experiences. Comedy, however, acts as a tool for us to cope with our everyday lives in the United States, which can be filled with fear and uncertainty, but are also filled with laughter and experiences relatable to the rest of the country.

Shows like Patriot Act with Minhaj are the first step with which people of color can talk about our political concerns nationally in the same way in which we interact with each other personally: aware of the things that threaten our livelihood, but being allowed to process our emotions in realistic and healthy ways.