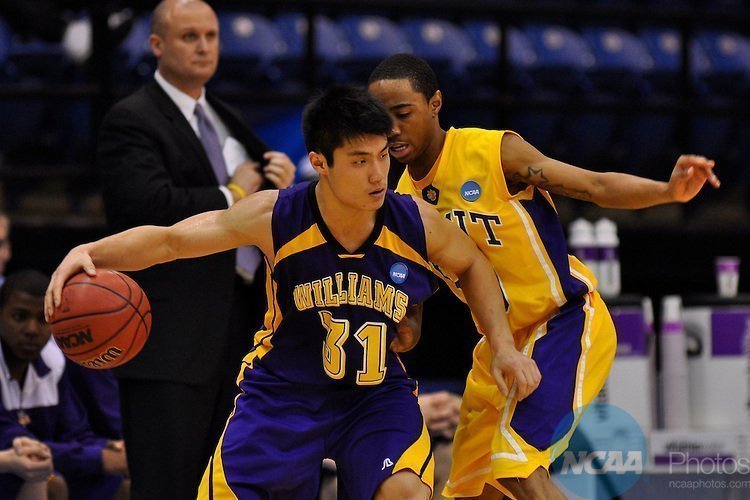 From 2009 to 2012, James Wang ’12 was an instrumental part of the men’s basketball team’s success, leading the way as a three-time All-American and the fourth leading scorer in Eph history. Six years later, both the sport and the College still remain influential to his life.

Wang was born in Taiwan, went to school in Australia and moved to the United States to pursue a basketball career. He attended Montverde Academy in Montverde, Fla., the same school that produced NBA stars Joel Embiid and Ben Simmons, as well as current Duke basketball star R.J. Barrett. In college, Wang led the Ephs to a national championship game in 2010 and a final four appearance the following year. Naturally, he had fond memories of the two deep NCAA tournament runs, but he cited the people he met in college as equally memorable. He still sees some of his former teammates multiple times every week. “The things that stand out most are the relationships created,” Wang said.

But Wang’s time playing for the Ephs was not even the pinnacle of his athletic success. After graduating, he played professionally for five years in China and Taiwan with three teams: Dongguan New Century Basketball Club, Pu-Yuan Basketball Club, and Guangxi Weizhuang Basketball Club. Initially, this presented inherent challenges, as moving to another country is always difficult. But for Wang, the opportunity to test his skills against elite competition outweighed any difficulties he faced. “I wanted to test my abilities against better players,” Wang said. “Night in, night out, I was facing a guy who had played in the NBA before.” And no matter what challenges he faced, Wang kept one simple truth in mind: “I was getting paid to play basketball. That alone trumps everything.”

The five years that Wang spent playing basketball postponed the beginning of his current career, but his late start did not prevent him from achieving immediate success. He currently works for the talent agency Williams Morris Endeavor (WME-IMG)in New York City, representing professional athletes. He recruits the athletes and also negotiates endorsement deals for them. “I knew that when I stopped playing I wanted to get back into sports,” Wang said. He had originally assumed he would go back into sports as a coach, but agency turned out to be the better fit for him. “I lived in New York and was thinking of sports opportunities in the city,” he explained. “I decided the agency route would be the most interesting.” He cites the opportunity to work with professional athletes as a major positive of his job as an agent.

At WME-IMG, Wang has worked on deals for athletes as famous as tennis stars Serena and Venus Williams and golfer Jordan Spieth. Recently, he closed a deal with NBA star Victor Oladipo. He is not Oladipo’s primary agent, but has met him multiple times and is always on the lookout for new deals for him. “It’s kind of rewarding when the deal’s done and he gets on a campaign and you say ‘Oh, that’s because of me,’” Wang mentioned.

In the professional world, Wang’s connection to the College is still important to him. “It’s awesome that if there’s ever a Williams connection, they’re always willing to help,” he explained. “If I ever come across a Williams guy, he’s always happy to connect me to the right people.”

And his attachment to the College goes beyond the ways it can be useful to him. He loved his time as an Eph. “Williams gets this reputation for being in the middle of nowhere [but you] form tighter bonds because it is a bubble; you have no choice but to form relationships with the people around you.” Wang’s former teammate Mike Mayer ’14 is visiting him this weekend, and his wife, Danielle Rainer ’13, is a former basketball standout who he met when they were both in college.

Wang’s life has been characterized by an ever-present desire to get the most out of his talents. That’s what drove him to come to the United States, to move to China and finally to become an agent. And throughout all of his successes and all of his travels, his connections to his college years have remained as strong as ever.