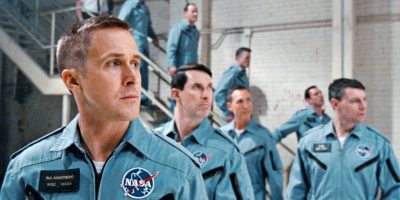 First Man, playing at Images Cinema through tomorrow, is the first of Damien Chazelle’s major films that isn’t centered around music. La La Land was a musical about performers in Los Angeles, while Whiplash focused on a jazz drummer’s ascent to greatness. Here, however, we are faced with something different – a slower, often quiet character drama about the first man to land on the moon. Despite having stretches of silence, the film still serves as an opportunity for Chazelle to show off film’s second dimension. The quiet is punctuated by mechanical groans and deafening thrusts, humbling reminders that these are just humans hurtling through space in hunks of metal. Songs of protest are played at one point as we watch the astronauts prepare for their mission, leaving the viewer to question whether the dream of sending men into space is worth the sacrifice. Thus, sound is as important as ever in Chazelle’s artistic vision, even as he leaves jazz clubs behind for outer space.

Although the film is a significant departure from his previous work, Chazelle handles the new setting beautifully. The spaceflight scenes leave the viewer feeling cloistered and breathless; the sense that the mission is never more than a mistake away from catastrophe is always present. These scenes are particularly effective because of their contrast with the climactic moonwalk scene, an exhibition of vast, open space that serves as a perfect foil to the oppressive confinement leading up to it.

Despite the setting, First Man isn’t really about space. It is more the story of Neil Armstrong (played by Ryan Gosling) than it is the story of the first moon landing. A significant portion of the film’s runtime is spent on Armstrong’s personal life and the tragedies that afflicted him throughout the buildup to his great achievement. Most notably, the death of Armstrong’s daughter at the beginning of the film becomes a fundamental part of his character. But one of the film’s greatest strengths is its success in integrating Armstrong’s personal life with his professional life. It never feels divided between exciting space sections and biographical filler; Armstrong’s dedication to his work is always contextualized by what he has going on at home, and vice versa. The film’s cohesive character arc shows the totality of a man’s experience at a dramatic time, and never settles for leaving his personal matters as a side note.

Films about figures as celebrated as Armstrong can easily fall into the trap of hero worship, but Chazelle is careful to avoid this, never depicting Armstrong as more than human. He is portrayed as a highly skilled pilot and astronaut, but his achievements are accompanied by mistakes and occasional recklessness. In fact, the film opens with a scene of Armstrong flying a rocket-powered airplane and accidentally “bouncing off the atmosphere” before narrowly saving himself. The same complexity is on display in his personal life. It is obvious that he loves his family, but by no means is he depicted as a perfect father or husband. His relationship with his wife is often strained, especially during the film’s latter half. His work frequently affects his relationship with his children, and this tension comes to a head before his mission to the moon. The film isn’t a pure celebration of Armstrong, nor a criticism of him; rather, it is an acknowledgement of his humanity.

Despite all of these strengths, it is apparent that the film won’t please everyone. The film omits the planting of the American flag, upsetting some viewers who are looking for a patriotic celebration of a national achievement. However, these people miss the point; the film never seeks to be a simple celebration of American excellence. As Armstrong’s sons note in The Hollywood Reporter, the film “is a story about an ordinary man who makes profound sacrifices and suffers through intense loss in order to achieve the impossible.” There’s no requirement that every film about a national achievement has to place an emphasis on patriotism; the film provides a look into the personal side of a remarkable feat, and in doing so, enables it to be a refreshing, original take on an incredible story.

First Man is further proof that Chazelle is among contemporary cinema’s most compelling voices. It is a deeply human film that is simultaneously thrilling and humbling, enormous and personal. For anyone who wants a look into the human side of a historical moment, First Man is unmissable.