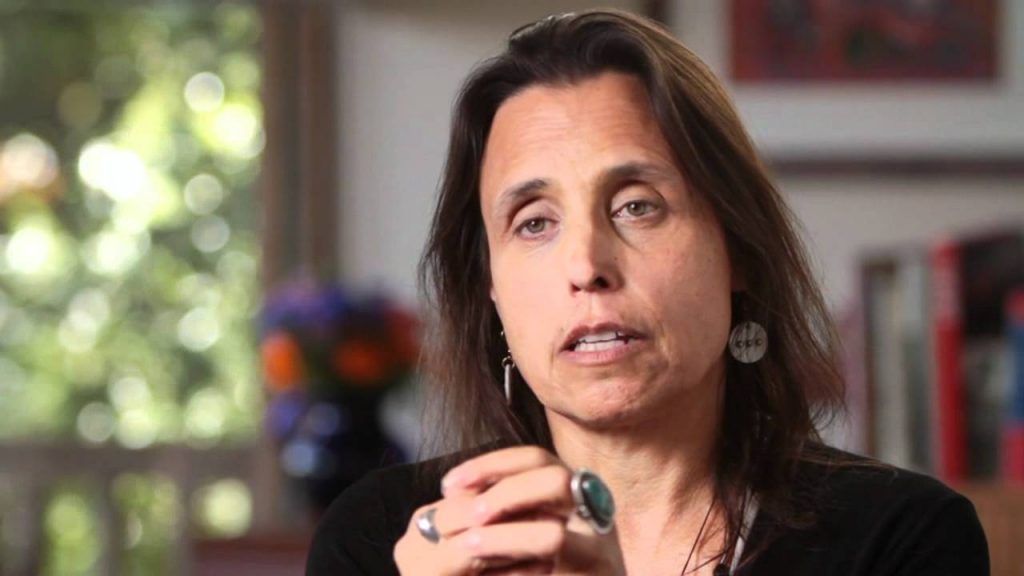 The talk, “Environmental Justice from a Native Perspective,” focused primarily on LaDuke’s work to protect Native lands and ways of life against the threat posed by moneyed fossil fuel interests. It also served as a call to action for members of the College and surrounding community to fight back against the broader threat of climate change.

LaDuke, who holds a B.A. in economics from Harvard and an M.A. in community economic development from Antioch, spoke on dealing with climate change as an economic issue as well as a social one. She opened by arguing that society finds itself on the brink of creating what she referred to as “a new economy.” Co-opting contemporary political language, LaDuke spoke hopefully about society’s opportunity to transform the economy away from its reliance on fossil fuels.

“I want to make America great again,” she said. “Though, for me, that looks a bit different than it does for Mr. Trump: to me, America was great when we had the agricultural and biodiversity that sustained this continent for thousands of years.”

The arc of the lecture focused on the two paths that LaDuke argued society must choose between,  which will determine the country’s economic course. “It is a time for choice,” she explained. “Either we continue on the scorched and worn path and continue to lose what we have, or we follow the green path.”

To follow the scorched path, according to LaDuke, is to continue the current economic course in this country, leading to greater levels of emission and continued climate change. The green path, on the other hand, offers the promise of cleaner air, water and economic development.

Changing course, LaDuke explained, requires a shift away from carbon-based development and toward regenerative economies. She has long fought for this change through her organizations White Earth Land Recovery Project and Honor the Earth, which advocate for culturally-based sustainable development, renewable energy sources and environmental justice for Native and Indigenous peoples.

LaDuke also emphasized the need for communities to “localize energy,” a means of moving away from fossil fuel-based energy and pursuing more efficient sources. She discussed some of the innovative methods that her community on the White Earth reservation in northern Minnesota has instituted to pursue this goal. These include solar-paneled homes and restaurants as well as using other renewables to cultivate local sources of energy.

For LaDuke, climate change poses a threat not only to the environment and economy, but also to American civil society. LaDuke documented the collapse of civil society in the northern United States, explaining how police forces armed with military-grade weapons are being deployed to shut down protest that resist encroachments on their land and the destruction of the local environment. LaDuke used photos to illustrate the abuse suffered by activists who have protested attempts by special interests and companies like Enbridge to construct the Dakota Access and Line 3 pipelines.

The economy and broader political structures that uphold it are failing citizens, LaDuke argued. She believes the rights of people are being sacrificed to benefit wealthy corporations. “My whole life I’ve been told we have to follow the ‘system,’” she said. “Well, I really wish the system would work. I’m sick of having it shoved down our throats.”

The policy of extreme extraction pursued by oil companies in North America threatens to further the path of the “scorched” economy, LaDuke argued. She discussed how dependent modern society is on fossil fuels, and how this only feeds the greed of wealthy corporations who rely on ever-increasing consumption. “We rationalize our behavior like addicts,” she said. “And so, our public policy is written by the dealers [the corporations] … and their interests have now superseded those of people.”

Despite the forces working against progress, LaDuke remains optimistic that progress is possible. She spoke of the need for communities to come together and achieve change at the local level, explaining that the only way to combat climate change is for every person to do something productive. LaDuke encouraged the audience to stop waiting for someone else to do the work and fight for what they believe in. Her motto of choice is, “Just do it.”

The aim of society, LaDuke concluded, should be to resist the negativity in the world and combat it with optimism and love. She believes in the power of positivity and the ability of all people to be forces for good in society. “There’s a lot of ugly in the world,” she argued. “But let’s be beautiful.”