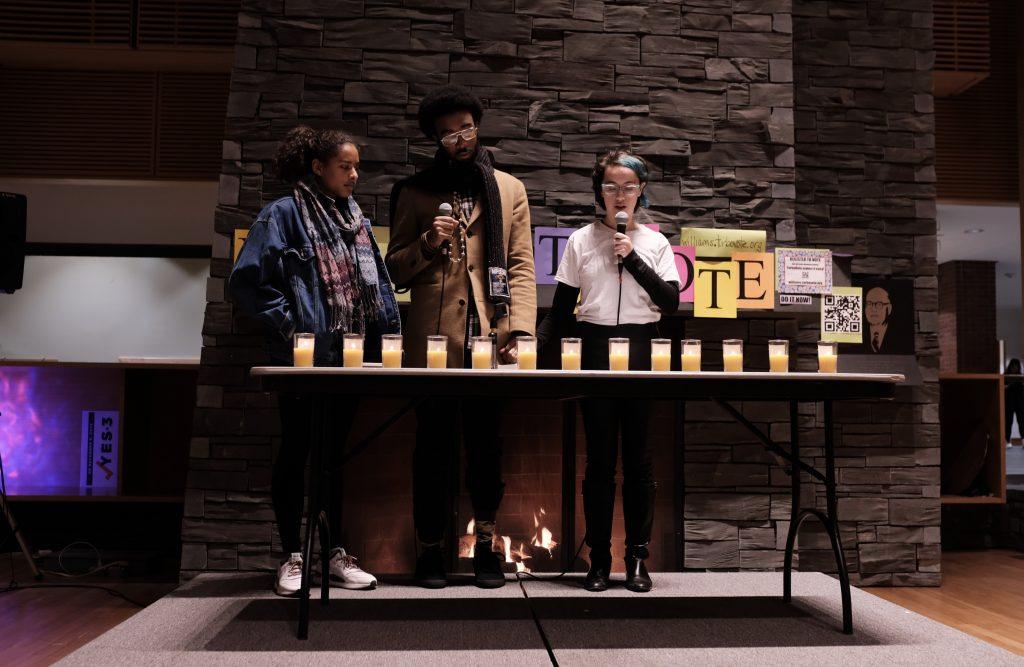 On Wednesday, students across campus participated in an interfaith vigil to remember the victims of the Louisville and Pittsburgh shootings. The vigil included speeches, poetry and songs. Shaheen Currimjee/Executive Editor.

Four days after the Tree of Life Synagogue shooting in Pittsburgh, Pa. and the Kroger supermarket shooting in Louisville, Ky., students, faculty and community members came together in Baxter Hall to mourn and remember the victims, console and comfort one another and inspire hope. The vigil was co-organized by members of the Williams College Jewish Association (WCJA), Williams Interfaith, the Muslim Student Union (MSU), Williams Catholic, InterVarsity Christian Fellowship, Williams Secular Community, the Black Student Union (BSU) and Refugee Advocates: No Lost Generation (NLG). Students from each group responded to last week’s white supremacist attacks through speeches, poetry and songs.

Omar Kawam ’20, from MSU, spoke about the importance of interfaith gatherings. “Regardless of our community, regardless of our background and faith, we need to actively feel a sense of mourning and recognize [these events] as atrocities and not as just recurring events,” he said. Kawam shared a brief verse from the Qur’an in which God informs the children of Israel that killing or taking a life of one person unjustly is as though you are taking the life of all of humanity. “There’s an essential quality in this message … that we have to reflect upon [the fact] that these tragedies affect not only the direct communities, but also communities at large,” he said.

Jacob Lezberg ’20, from WCJA, and Caitlin Coyne ’21, from Williams Catholic, recited poems commemorating those who died and reminding the community that in trying times, blessings come in odd forms.

In a moving speech, Evan Chester ’21, from WCJA, declared his anger towards the acts of terrorism against both the Jewish and black communities and expressed his fear that these tragedies will continue. “I’m terrified because on Sunday morning when I walked into the Jewish Religious Center (JRC) on campus, there were Campus Safety and Security officers waiting outside,” he said. “The JRC, an open, religious, safe space, my safe space, needed some form of protecting.” Chester concluded by saying that we need to keep the passion and frustration we feel towards these acts so that we can fight against discrimination and hatred.

Judaism teaches that in mourning it is important to embrace not only sadness, but also joy, and to be grateful for the lives of the deceased and the love that they spread. Everyone hushed as Theophyl Kwapong ’20 took to the stage to sing the hymns, “Amazing Grace” and “Take My Hand, Precious Lord.” After, Coly Elhai ’19, from Williams Secular Community, and Patrick Postec ’21, from Williams Catholic, read out brief biographies of each of the 11 victims from the Tree of Life shooting. Mackenzie Grace ’22, from WCJA, and Isaiah Blake ’21 and Alia Richardson ’19, from BSU, lit candles honoring each of the victims.

Later in the service, Emma Lezberg ’20, from WCJA and NLG, spoke on another aspect of the Tree of Life shooting: refugees. The shooter, Robert Bowers, not only targeted Jews because of their identity, but also because of vocal Jewish support for refugees and immigrants, particularly through the Hebrew Immigrant Aid Society (HIAS). HIAS, which has helped over 4.5 million people escape persecution, organized National Refugee Shabbat on Oct. 19. Congregations, organizations and individuals across the country, including WCJA, dedicated that Shabbat to refugees. Lezberg noted that National Refugee Shabbat was a catalyst for the gunman’s attack. “The horrific tragedies of last week teach us that we cannot approach issues of hatred and injustice in isolation,” Lezberg said. “Anti-Semitism, anti-blackness, racism, discrimination and xenophobia cannot be untangled and must be fought by all of us, together,” Lezberg explained.

Michael Rubel ’19, from WCJA, echoed these sentiments, focusing on students’ roles at the College. “In a country – and especially on a campus – where leaning into the numbness and avoiding the terror seems easier, we cannot be silently hopeless,” Rubel said. “Sweeping, systemic change is necessary, but reaching for progress also depends on the little things. The individual conversations we have with our friends and our yet-to-be friends are the ones that can remind everyone of that core idea which, amidst tragedies like these, seems radical: life has value.”

Students from the Gospel Choir (GC) also paid their respects on Nov. 1 at a community vigil in Pittsfield, Mass. During the vigil, religious leaders of different faiths and backgrounds stressed the importance of finding courage and solace in religion. “Music was used throughout the service to uplift the community, and GC’s performance at the end of ‘This Little Light of Mine’ served much the same purpose,” Ana Laura Delgado Fernandez ’22, from GC, said.