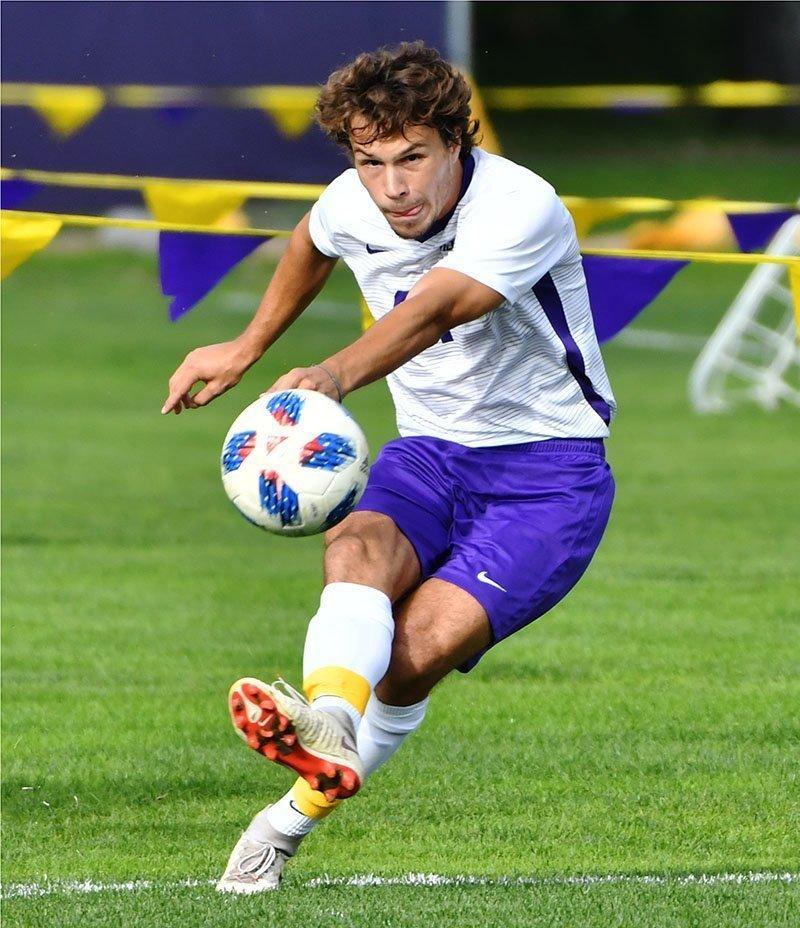 While there were no goals in the first half against Hamilton, it was nevertheless an entertaining 45 minutes. Williams recorded two shots on goal within the first two minutes of the match, and a seventh-minute shot from Hamilton’s Luke Eckels, a volley off of a corner kick, hit the crossbar, inches away from a score.

Williams played quality soccer; the Eph back-line defenders gave up just two other shots in the first half, neither of which was on goal, and ably contested a staggering seven first-half corner kicks from the Continentals.

Despite a scoreless first half and Hamilton’s overall skill and chemistry, the Ephs were primed to strike at any moment. The second half began similarly to the first, with attacking pressure from Williams leading to several legitimate chances to score, as well as a few more breakthrough opportunities from Hamilton.

The tenor of the match drastically changed in the 76th minute, however, when midfielder Chris Fleischer ’20 hit a cross to striker Demian Gass ’20, who headed the ball into the lower right corner past Hamilton netminder Thomas Benson, putting the Ephs up 1-0.

Clearly not satisfied with just a one goal lead, Williams grabbed an insurance goal in the 82nd minute via a breakaway strike from Eric Hirsch ’19 to seal the victory. Hirsch stole the ball from a Hamilton defender 30 yards out from the goal and advanced on Benson in a one-on-one opportunity. As Benson roared off the goal line towards Hirsch, Hirsch chipped the ball over Benson into the net to give the Ephs a 2-0 lead.

Williams netminder Aaron Schein ’19 was the beneficiary of tremendous defense by the Eph backline and was only called on to make but one save recording a clean sheet. Meanwhile,  Hamilton goalie Thomas Benson also had a strong performance. Despite allowing two late goals,  he saved seven Williams shots.

Sunday’s match was as entertaining as any match with zero combined goals could possibly be, with both teams aware of the stakes. Both defenses played especially aggressively, thwarting dangerous chances on either side.

In the 29th minute, Jules Oberg ’22 blasted a shot from 25 yards out on the left side towards the bottom right corner, but the ball bounced just inches wide of the net. With eight minutes to go in the first half, Mules player David Howarth curled a rocket from just outside the box, garnering a terrific diving save from Schein to preserve the scoreless half.

In the second half, Williams would dribble the ball deep into Colby territory and look primed to finally dent the scoreboard. However, in a testament to the ferocious effort of Colby’s defenders, these possessions ended with five outstanding saves from Mule goalie Dan Carlson, four corner kicks, three shots that were either off-target or blocked and zero goals.

The most perilous chance came in the 59th minute when Eric Hirsch ’19 tried to head a ball past Carlson. Despite running in the opposite direction, the goalie managed to barely redirect the ball away from net, keeping the match scoreless and proving his reputation as one of the preeminent goalies in Div. III.

The first overtime saw several decent chances from each side, including a rocket from Oberg that flew inches over the crossbar, but penalty kicks is where this match was decided.

Between the second overtime period and penalty kicks, Colby coach Ewan Seabrook subbed Carlson out for first-year Matt Johnson in what many considered a risky move.

After trading misses in the first round and makes on the second, third and fourth rounds, the two squads remained deadlocked going into the fifth and possibly final round of kicks. Colby’s Ethan Fabricant, brother of Williams’ Bobby Fabricant ’20, stepped up to the ball and slotted it right past a diving Schein to put the Mules in the lead.

Up to take Williams’ kick, in hopes of continuing the shootout to a sixth round, was Oberg, who had been around the net all match long, to no avail. On this final kick, Johnson guessed right, saving Oberg’s shot and clinching Colby’s spot in the NCAA Tournament. This win was Colby’s first NESCAC Conference Tournament Championship in its school history. They are the first team to win the tournament as an eighth seed.

Schein made three saves in regulation, while Carlson, fresh off winning NESCAC Player of the Week, was tremendous once again, recording nine saves during the first 110 minutes.

Colby secured the conference’s automatic berth in the NCAA Div. III men’s soccer tournament. On Williams’ side, the men still qualified for the NCAA tournament.

In the first round, the Ephs prepare to travel to Cortland, N.Y. on Saturday to compete against Elizabethtown College at 7:30 p.m.