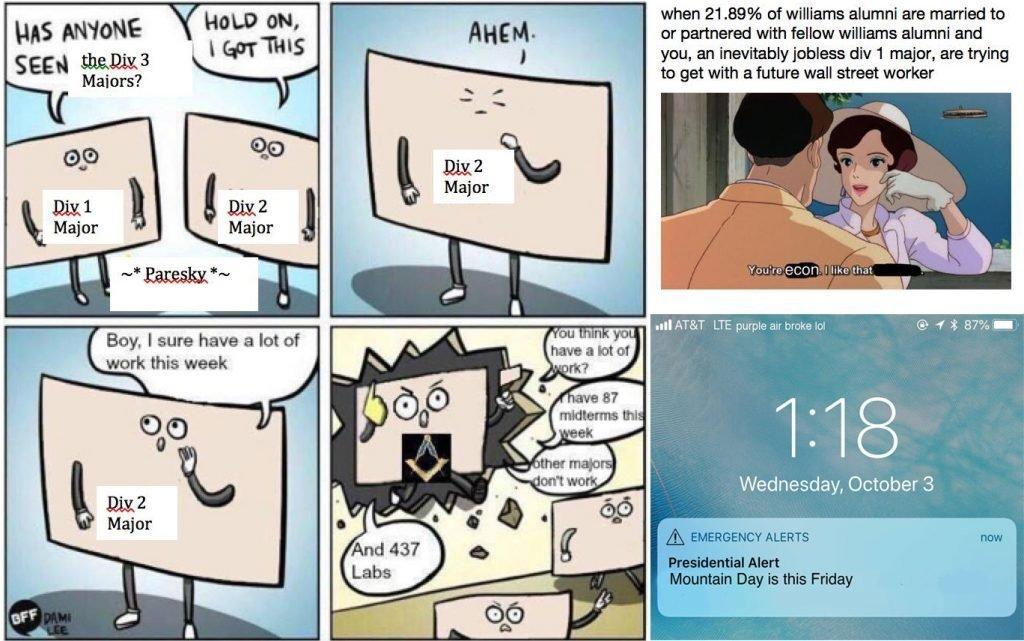 In just over a year and a half, the group has expanded at a remarkable pace, now “boasting” 2,589 members. Issues raised within the group vary, including commentary about working on one’s acting chops as a “sober” student at Whitmans’ Late Night, rants over course workloads, a petition for making the exterior of the Williams Inn blue and “spicy”  call-outs at certain members of the College administration.

This is “Williams Memes for sun-dappled tweens,” the premier Facebook page for students to share all sorts of memes commenting on College life and topics important to members of the student body. Any member can post, granted that the post meets the community standards of relevancy to the College and is not racist, sexist or ableist.

Despite the group only existing in a virtual space, the beauty of the page lies in the fact that students can come together on “Williams Memes” in an open forum for some cathartic, edgy and humorous content. As Luke Baumann ’19, co-founder of the group, put it, the group’s purpose is “to provide high-quality, hilarious image ‘macros’ to our valued customers.”

“Name another institution on campus in which every single person on campus who is a part of the group – and even those who are off-campus – are on equal footing in an open forum, and they are nice to each other for the sake of humor,” Danny Donahue ’19, another co-founder, said.

The establishment of the meme page is part of a larger nation-wide movement of students at institutions of higher education creating Facebook pages in which members can post memes to relate to other students on campus. Inspired by these meme pages, Baumann founded the page with classmates Donahue, Liam Ouweleen ’19 and Mano Sundaresan ’19.

The page is also used to criticize the administration on several fronts. Sundaresan said that the four of them were upset by parties “constantly getting derailed by the administration.” Additionally, they cited overspending, administrative bureaucratic decisions and misappropriation of funds – for example, the costly marble blocks in Sawyer Quad –  as other criticisms. Memes were an ingenious way to voice such concerns.

“It’s a language that the bureaucracy can’t really speak,” Donahue said. “Memes are an outlet for student grievances. It’s just ridiculous how serious the administration takes itself sometimes; this understanding that this meme is inaccessible to them and that they won’t be able to understand them – that is why the memes are so perfect.”

But with the arrival of  Maud Mandel as the College’s new president following Adam Falk’s departure, students are excited for the “Maud era.” Many feel that Mandel is a wholesome, kind, relatable and genuine president, and this sentiment is reflected by memes about the administration now being less “sarcastic” and “more wholesome,” Donahue said. One meme even explicitly states in rainbow text: “Friendship ended with Adam / Now Maud is my best friend.”

In a broader sense, Onyeka Obi ’21 views the page as a way for a student body to struggle and laugh together. “I think the meme page is, functionally, a refuge for a lot of the student body,” Obi said. “We’re busy, we’re overworked, we’re tired [and] we’re hungry. But we can take a break and laugh our hearts out over weird stuff we can bond over. Our campus is full of eclectic, different people, and it is very well reflected in the meme page.”

Emily McDonald ’19, who posts memes on the page, said memes that play off of College stereotypes, student archetypes or academic habits are some of her favorites. Many students seem to love these memes as well: McDonald’s meme (pictured top left)  satirizing course loads across the three academic divisions is the most liked meme on the page as of date, with almost 700 likes or reactions.

Obi also noted that the page has provided space for acknowledging what she calls “uncomfortable social dynamics that exist” in campus culture, which can be attributed to the student body’s wide range of life experiences and perspectives.

“I make memes making fun of things close to my heart – things I noticed during my freshman year, [like] the social weirdness produced from being from a socioeconomic class completely different from what Williams typically has,” she said. “From my own perspective, [the meme page] facilitates a lot of campus conversations around uncomfortable topics without making people feel horrifically attacked or offended, which is great.”

But the page was not always an open and welcoming community for all. In its beginning stages, several students had harsh criticism aimed at the founders, mostly Baumann, citing disapproval at the administrators’ power to delete memes that they believed were not creative or good enough to make it onto the page.  “We admins liked to exercise a sort of ironic dictatorship-like approach to content moderation; we’d delete things if we didn’t like them and had all sorts of arbitrary rules,” Baumann admitted. Soon,  students were making other meme pages in response to the “Williams Memes” founders.

During the spring of 2017, the page administrators smoothed rough patches amongst certain members in the page and affirmed that the page was open to all who adhered to simple and straightforward community standards: allowing people to gain joy or some good laughs and not being hostile to members.

Ultimately, the page fosters unspoken connections between students at the College, whether it be through discussing more serious issues of racial diversity and privilege or just squeezing in laughs during stressful times.

“The meme page is ‘just’ a meme page, but I do think it plays a part in helping the whole Williams community feel a little more connected and help students understand each other better,” Baumann said. “We’re just out here trying to let off some memes,” Donahue added.

With the collective creativity and humor of over 2,500 people, “Williams Memes” has a wide horizon ahead. Baumann has a specific vision for the page, which the next wave of administrators could take on once he and the other founders graduate this spring. “In the long-term, we hope to build our audience to over one million, monetize the page and use its income to finance the construction of a gigantic hydroponic cranberry farm on top of LaGuardia Airport,” he said.