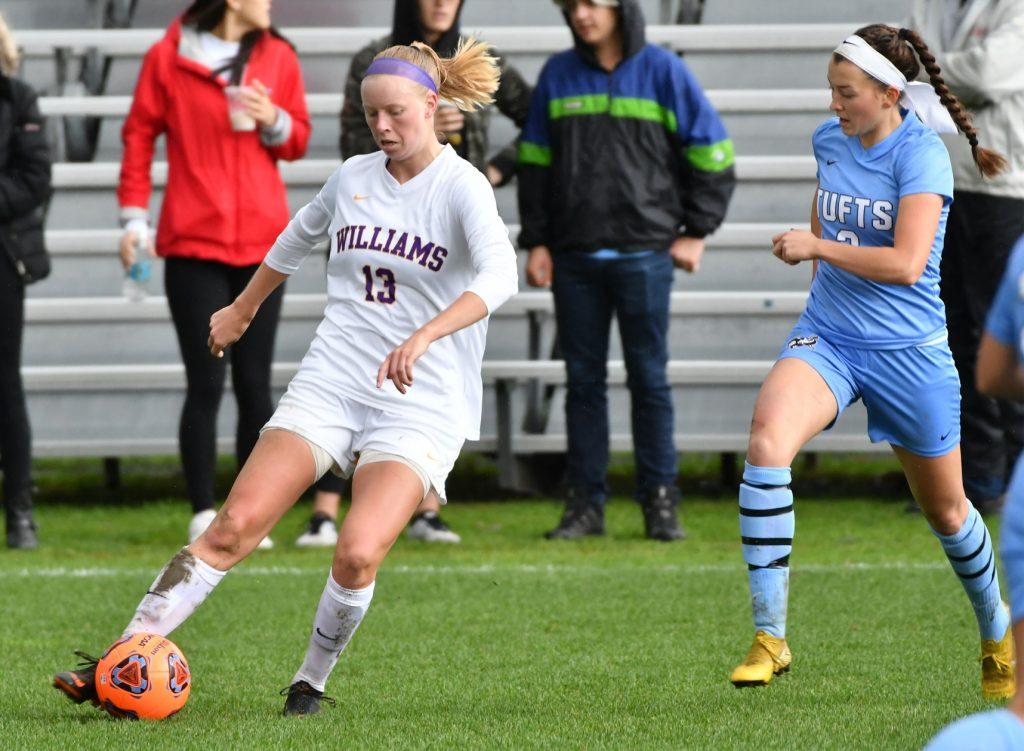 Aspen Pierson ’21 scored the first goal to give the Ephs an early lead against Tufts in the championship game. Photo courtesy of Sports Information.

Against the Jumbos, the Ephs scored two first half goals and an own goal from Tufts to give themselves a comfortable 3-1 lead at the half. Tufts cut the deficit with a goal in the 50th minute, but the women’s scrappy defense helped them clinch a spot in the NESCAC championship.

Aspen Pierson ’21 opened the scoring in the sixth minute after striking a failed clearance towards the net. The ball clipped off a defender, sailing over the head of Tufts’ netminder Emily Bowers. Bowers tried her best to recover, but the ball rolled slowly into the net to give the Ephs an early 1-0 lead. Tufts responded in the 15th minute, with Sophie Lloyd posting her 10th goal of the year.

With the game tied 1-1, Victoria Laino ’21 looked to capitalize on a free kick in the 33rd minute. She sent a high arcing shot into air that sailed over Tufts’ wall and found a tight window in the upper-right corner of the goal, putting the Ephs back on top.

Despite the cold and rainy conditions that day, Williams continued to find offensive opportunities. In the 42nd minute, with Williams charging down the right flank, Sarah Hollinger ’19 found Rain Condie ’21 on the right side. Condie skipped a pass into the goal box, intending to find a teammate. One of Tufts’ defenders blocked the shot, but her deflection sent the ball into the net for an own goal.

In the following half, the Jumbos’ Sarah Maloney scored with an assist by Hannah Isenhart to shrink the deficit to one, giving Tufts hope for a comeback.

Then, in the 61st minute, Tufts had a chance to equalize. After a dangerous pass back, tri-captain goalie Olivia Barnhill ’19 was forced to leave the goal box to dive on the ball. She got there in time, but the ball came loose and was placed perfectly in front of Tuft’s Liz Reed. Reed slammed a shot towards the open net, but Barnhill managed to block it. Tufts would have only one more shot on goal in the half. Williams’ defense in the final 30 minutes secured the 3-2 victory.

On Sunday, the women lost 0-1 to Middlebury in the NESCAC Championship game due to Panther Ellie Greenberg’s go-ahead goal in the 67th minute.

Greenberg, whose speed was a constant threat in the first half, finished what had been an offensive flourish by the Panthers. Jane Devito started the play by putting the ball on the right flank, where Eliza Van Voorhis rerouted the ball to Simone Ameer. Ameer volleyed the ball into the goal box for Greenberg, who knuckled the ball off her leg, sending it into the net.

The goal seemed to take the air out of Williams, as they struggled to find an offensive spark. As the game neared the 85th minute, Williams started to take desperation shots. Pierson found space on the left side twice and let the shots fly from 25 yards out, eliciting excitement from the hometown crowd. Unfortunately, both missed the net.

Middlebury eventually worked the ball to the corner and ran out the clock, securing its fourth NESCAC title in school history.

The game was scrappy, aggressive and hard-fought. Isabelle Hartnett and Caitlin Magruder both received yellow cards – Hartnett’s at 12:05 and Magruder at 33:05.

Williams had dominated the first half, putting eight shots on goal while only allowing two from Middlebury. They had their best chance in the 22nd minute, when Pierson received a pass from Sarah Scire ’20, crossed her defender just north of the 18 and drilled a shot to the left side of the net. Panther goalie Ursula Alwang dove and got a hand on the ball, deflecting it around the right post.

In the 33rd minute, Greenberg’s speed created a breakaway chance for Middlebury. Two passes from the backfield pushed the ball to Greenberg who outran her defender on the right flank. Greenberg took the shot, but Barnhill, who had left her line, slid and blocked the shot with her leg.

Alwang had three saves in the match, with no goals allowed. Barnhill would finish with two saves and one goal allowed. The loss was only her second postseason loss in her four-year career.

Despite the loss, the Ephs return to play in the NCAA tournament. They will open the first round against the University of New England next week.