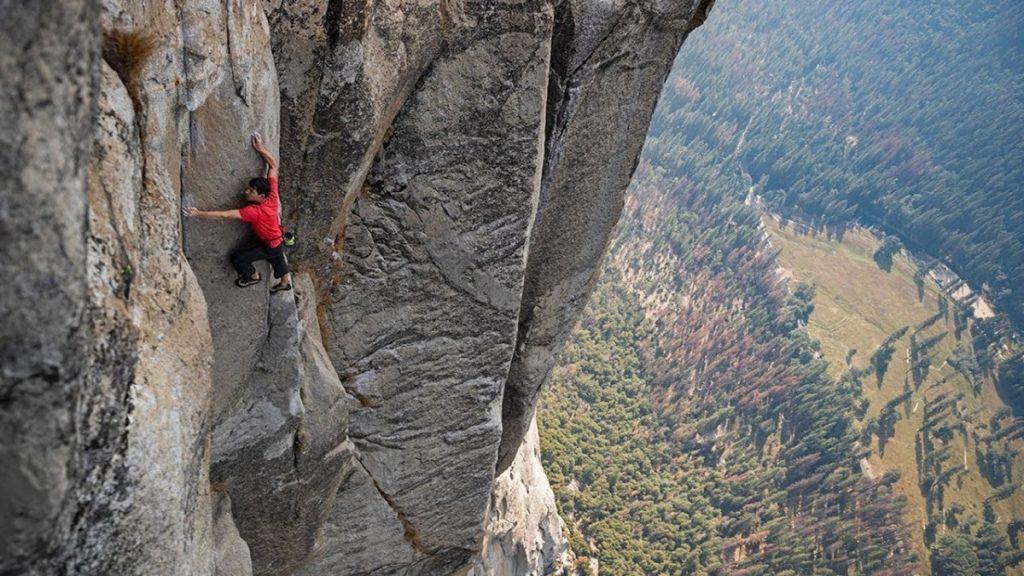 Horror films weren’t the only option for experiencing vicarious terror on the big screen this Halloween. The opening shot of Free Solo, the National Geographic-produced documentary about superstar rock climber Alex Honnold, is as gut-wrenchingly vertigo-inducing as it is stunningly beautiful. The sharp-angled, vertical perspective highlights both the absolute beauty of the natural world Honnold immerses himself in, and the almost inconceivable danger of what he is attempting to accomplish.

The film, which will be playing at Images Cinema through tomorrow, focuses on Honnold’s years-long obsession with achieving something unprecedented in his field – specifically, free soloing El Capitan, the 3000 foot vertical wall of sheer granite in Yosemite National Park that has been one of the biggest prizes of the climbing community for years. The hook of the title refers to Honnold’s particular brand of rock climbing which is one of the most extreme enterprises a human can undertake: free soloing refers to scaling a wall without a rope, harness or any other protective equipment. Honnold is alone with only his body, mind and some chalk to help him grip the precarious surface – the only thing between him and certain death.

The documentary, then, is as much about risk itself as it is about Honnold. How do you film such an extreme act of human risk-taking, and what are the ethical implications? Directors Jimmy Chin and Elizabeth Chai Vasarhelyi assembled an expert crew of climbers that were tasked with positioning cameras alongside Honnold’s route without breaking his concentration or altering his mentality. Despite meticulous preparation, Chin and his team were clearly torn throughout the process, terrified that any moment could turn their documentary into a record of trauma. The fact that almost every famous free-solo climber has died, and the devastating addition to that list of Swiss climbing legend Ueli Steck just a month before Honnold’s climb, created a weight of sobering history. This leaves Honnold somber but nonchalant while his friends, including climbing veteran and mentor Tommy Caldwell, are pushed to the limits of what they can bear to risk.

Sannie McCandless, Honnold’s girlfriend, is also anxious about Honnold’s fate. Her relationship with the climber is the film’s main B-story. Honnold is openly frank about how dating is not easy given his profession and personality; he isn’t very emotionally open, he won’t give up his death-defying ambitions for anyone and he doesn’t completely comprehend the degree to which other people care about his survival. Those traits make the relationship less than easy to navigate, but Honnold tempers his more detached tendencies with a blunt and uncompromising self-awareness; he knows how his temperament can negatively affect people, and he makes a deliberate effort to change where he can.

McCandless, though, is incredibly patient and cares enough to stick with him through the arduous and terrifying process as he prepares to do something that might kill him. And while Honnold’s personality doesn’t shift overnight, he does get better at handling the relationship on its own terms – from becoming more open to finally moving into a house after living out of a van which suited his climbing needs for years.

Honnold does acknowledge the appeal of traditional masculine archetypes of perfection, ambition and the “warrior mentality,” which have dominated so many athletic cultures and been central to his obsession with risking his life to achieve the seemingly impossible. However, he does not rely on brazen impulse or raw physicality, and while he is perhaps (from his loved ones’ perspectives) too at peace with what might go wrong, it becomes clear that he does not have a death wish. The process of free soloing El Capitan is as much a puzzle as it is a feat of staggering physical achievement. Honnold scales his preferred “Freerider route” many times with full safety gear, and his meticulous journal entries map out exactly where his hands and feet need to be at every moment, as well as the solutions to the most vexing parts of the climb. One such moment features a lateral move requiring switching thumbs in a handhold only big enough for one, a “boulder problem” that necessitates a karate kick position to stretch himself across a gap.

These techniques are as incredible as they are terrifying, and even though the viewer knows going in that Honnold makes it to the end of the film alive, this still cannot completely mitigate the terror of watching him make seemingly impossible history while also knowing that a single mistake will result in failure and fatality. The sensation is compounded by the incomprehensibility of why someone would need to do this, but the emotional high on his face when he reaches the top and takes in the incredible beauty at the end of the gauntlet goes a long way in sending the audience home with the thought, “Oh. That’s why.”