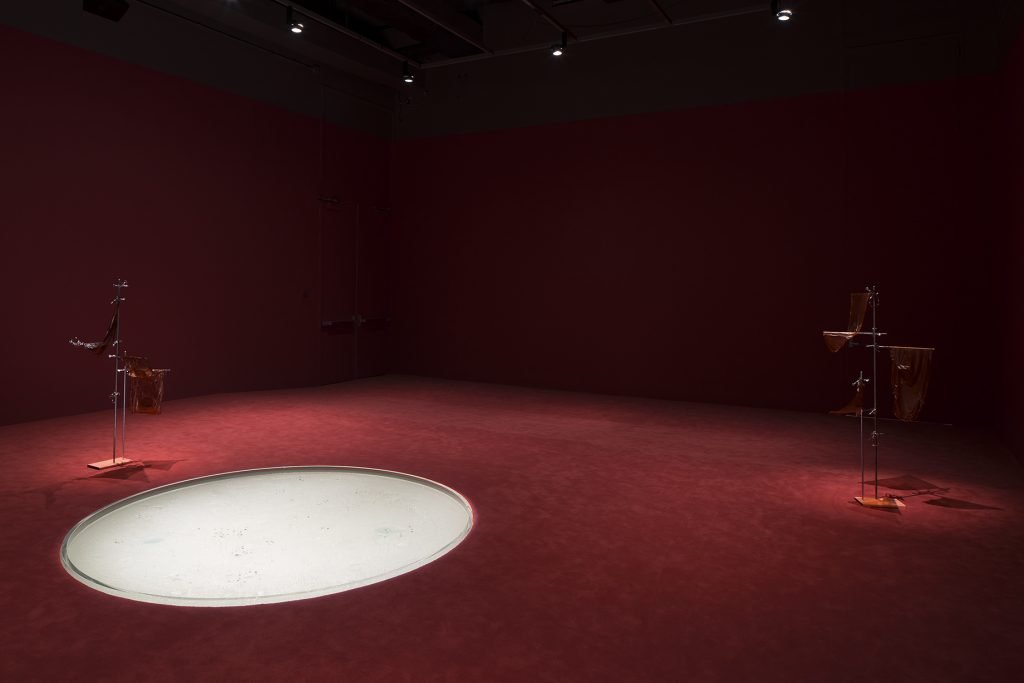 Step through the front doors of the William College Museum of Art (WCMA) anytime between now and early February of next year, and you will be greeted with a formidable, undeniable menthol scent. Step further into the gallery to your right, and the ‘80s synths of an incomprehensible yet familiar song will similarly invade your ears. Every step forward into Anicka Yi’s Our Love is Bigger than an AIDS Quilt only furthers Yi’s agenda; namely, the fusion of smell, sight and sound into one synesthetic situation.

The exhibit initially appears innocuous enough, although spending an extended amount of time within the burgundy walls and partially inclined floors allows the viewer to realize that something is, indeed, slightly off. Perhaps it is the minty scent, which was chosen particularly to trigger recollections of institutionalized personal hygiene (also a personal reference by Yi to the experience of a palate cleanser titled “Mint Pond” at the famed restaurant elBulli – mentholated and matcha-infused water vapor sealed below a layer of ice). Perhaps it is the song that plays intermittently, Soft Cell’s “Sex Dwarf,” which was edited to only include the inoffensive instrumentals and exclude the provocative lyrics; or the three freestanding sculptures cloaked with strange translucent sheets made of dried symbiotic colonies of bacteria and yeast, otherwise known as “Kombucha leather.” Arguably the most riveting aspect of the exhibit is the dimly illuminated circle of light in the center of the gallery, filled with hair gel and hundreds of cosmetic contact lenses. So tempting is this pool, in fact, that one visitor was seduced into sticking a foot into the art, leading museum staff to begin cautioning future visitors from doing exactly that.

Described as a conceptual artist by critics, Yi’s work lies at the intersection of fragrance, cuisine and science; she is known for installations that engage the senses, especially the sense of smell, and for her collaborations with biologists and chemists. Beyond the sensorial assaults, Yi is also known for her use of unorthodox, often living and perishable materials, including but not limited to: tempura-fried flowers, canvases fashioned from soap, stainless steel shower heads, fish oil pills, shredded Teva sandals boiled in recalled powdered milk, and bacteria. She is even known to have injected live snails with oxytocin, as she did in her 2014 exhibition Divorce at 47 Canal in New York.

Yi’s Asian American identity also often plays a key role in her works, as she was born in 1971 in Seoul, South Korea, before relocating to the United States at the age of two. Impressively, Yi won the prestigious Hugo Boss Prize presented by the Guggenheim in 2016, which was followed by a solo exhibition at the Guggenheim Museum in New York.

That being said, one cannot discuss this piece without addressing the name itself, which has a lot of implications in its reference to the infamous NAMES Project AIDS Memorial Quilt. The AIDS Memorial Quilt, which began in 1987 and was displayed on the National Mall, is an enormous quilt made as a memorial to celebrate the lives of people who have died of AIDS-related causes. In invoking this monumental work of craft, Yi inevitably forces us to ask questions such as: why is the AIDS quilt being referred to as “an” rather than “the”? Whose love is in question? And could it really be bigger than something that even the National Mall was unable to hold all at once?

Regardless of the concerns brought about by the title, which the artist has only explained so far by calling it a “personal reference” or “patches of personal memory,” the piece is undeniably one of the most compelling works WCMA has acquired in a long time. The piece was originally shown at the MIT List Visual Arts Center as part of the exhibition 6,070,430K of Digital Spit. Students who took the Fall 2017 course “Acquiring Art: Selecting and Purchasing Objects for WCMA” were the ones who chose this work. Our Love is a provocative and refreshing addition to the WCMA collection, and it is my hope that, in future purchases, the museum will continue to support both student-led acquisitional initiatives and Asian American artists who break the mold.